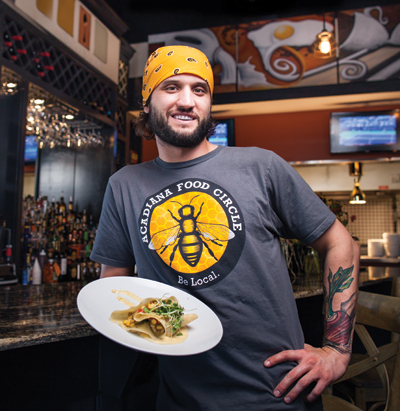 Bryan Jewell and Ryan Trahan approached their old friend Jonathan Kastner about a new restaurant concept they were working on in Lafayette, with more to come in other Southern cities. They lured the former chef of Lafayette’s City Club and Bella Figuera to put his spin on the menu.

The result is Brick & Spoon, a casual, hip restaurant that serves unique and classic breakfast and lunch dishes. The Lafayette location opened in May, followed by the Orange Beach, Ala., restaurant. A Houston location will open soon.

Kastner grew up in Lafayette but studied at Chicago’s Kendall College. He returned to Acadiana about six years ago. In addition to helming the Brick & Spoon kitchen and developing the kitchens at the new restaurants out of state, he serves as a health cook, helping people lose weight, avoid gluten or deal with other nutritional issues.

“I help them to achieve (their goals) through food,” he says.

His heart is in the local food movement, and he collaborates with the Acadiana Food Circle, a collection of local chefs, producers and farmers working to make farm-to-table fare easier for restaurants. Since it’s difficult to stock Brick & Spoon completely with local products, Kastner uses local ingredients in daily specials.

Keeping it local is not just about the food, Kastner insists. Brick & Spoon uses local flowers from Home Grown Organics to add color to the restaurant.

“We try to support local producers in any way we can,” he says.

At Brick & Spoon, Kastner enjoys taking traditional flavors and combining them in unique ways. Deviled on the Bayou, for instance, brings deviled eggs up a notch by mixing eggs with shrimp and tasso for a purée and then topping it with a fried oyster and Sriracha aioli. 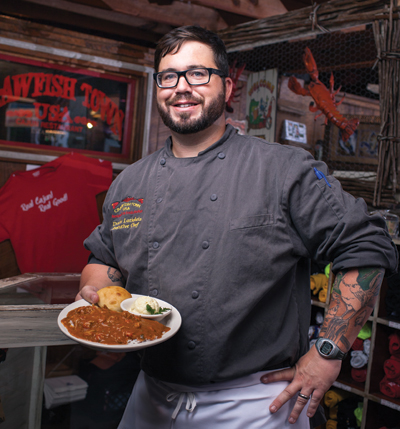 For Chef Dustie Latiolais, taking over the kitchen at Crawfish Town USA in Henderson was a career coming full circle. Latiolais hails from nearby Cecilia and worked at Pat’s in Henderson, his great uncle’s restaurant. He also spent time in the Crawfish Town kitchen before heading to the Louisiana Culinary Institute in Baton Rouge.

With his culinary diploma and associate degree under his belt, Latiolais worked for Stoube’s and the Hilton Garden Inn in Baton Rouge and L’Auberge Casino Resort in Lake Charles. Then in October 2012, Latiolais became the executive chef of Crawfish Town USA.

“Finally, I came back home,” he says.

Because he had worked there before, taking over the kitchen was easy, he says; he knew the business and knew what was expected of him.

“Coming back was like reuniting with the family. I came back knowing the process,” he says.

Crawfish Town USA still specializes in local seafood and plenty of crawfish dishes, in addition to an endless parade of boiled crustaceans every spring. Latiolais draws upon seafood producers a stone’s throw from the restaurant for his fish, crabmeat and crawfish. Some of his favorite dishes include the Seafood Sensation Salad, a mixture of crab, crawfish, shrimp and fresh corn atop heirloom tomatoes.

Latiolais’ seafood expertise landed him as a competitor for this year’s Louisiana Seafood Cookoff, where he created Cypremont Point soft-shell crabs, double-battered and served over crawfish and tasso corn maque choux.

He’s changed a few things at the restaurant and shortened the menu, and he changes items with the seasons. One new thing the chef initiated was to peel and freeze crawfish tails for the off-season, good news for crawfish lovers. 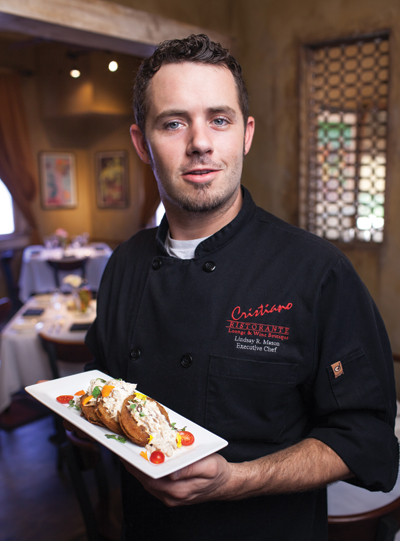 Executive Chef Lindsay Mason of Cristiano Ristorante comes from “a cooking family.” His South Louisiana grandparents cooked, and his mother served meals six days a week, leaving Sunday as a “fend-for-yourself” day. Mason didn’t expect to enter the restaurant business – he received college scholarships for art – but in high school he worked in Thibodaux restaurants and caught the culinary bug.

He’s been in the business for 16 years now, with seven years at Cristiano Ristorante Lounge and Wine Boutique, following stints at Fremin’s, Café Milano and the Bayou Country Club, plus a quick gig offshore. He not only helms the kitchen at Cristiano’s in Houma, but also its sister restaurant Dick and Jenny’s on Tchoupitoulas Street in New Orleans. Cristiano’s specializes in Italian cuisine while Dick and Jenny’s menu veers toward South Louisiana dishes.

Because of Mason’s background in art, he centers his culinary creations around presentation, enjoying crisp colors and textures. He calls it “the art of the dish.”

“You eat with your eyes first,” he says.

He prefers to let the flavors speak for themselves. He doesn’t “muddle the food” or mask flavors. Sauces, for instance, are supposed to accentuate the dish, not overpower it.

He also prefers locally grown items, such as heirloom tomatoes in different colors for his Caprese salad, married with buffalo mozzarella and home-grown basil. Raw items on the menu, such as oysters and tuna tartare, are popular, and Cristiano’s proximity to wetlands and the Gulf allows for consistently fresh ingredients. His oysters come from three blocks away and crabmeat comes from local producers “down the bayou.”

Mason changes the menu every three months to spotlight seasonal fare. Fall offerings include slightly heavier dishes, he says: “something [with which] to curl up with a bottle of red wine.”

“It’s all about making them happy,” he says. “The hours are crazy. If you don’t love what you do, you can’t be in the business.” 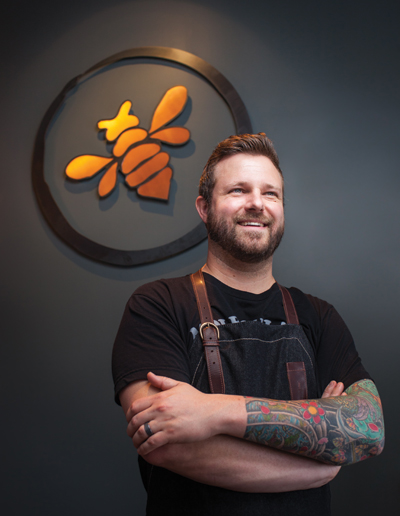 Another chef who came full circle is Chef Marc Krampe, who grew up in Lafayette but left for a Washington, D.C., boarding school when he was 16. He later attended Spring Hill College in Mobile, Ala., but after visiting his sister in Austin, Texas, he decided he was better suited for the Texas Hill Country. In Austin, he discovered his love for cooking.

“I worked in every restaurant I could just to learn everything I could,” he says.

“There are so many awesome restaurants here and so many cool bars, and we wanted to put them together,” Krampe says.

Krampe develops recipes for Social Southern but also supervises Charley G’s restaurant and helps with the wine dinners there. At Social, he works more in development with the assistance of Bill Schwanz.

“My wife would see me even less if I didn’t have him here,” he says of Schwanz.

One side of the restaurant features communal tables and the other more private dining. Krampe’s favorite spot is the nook with a leather couch and two comfy chairs, where diners can be intimate but “feel the pulse” of the restaurant.

Krampe tries to use local ingredients whenever possible, has a garden growing on the side of the restaurant and even sells items created at Social Southern the first Saturday of the month at the new Lafayette Farmers & Artisans Market at the Lafayette Horse Farm.

Social Southern’s menu consists of seasonal items and everything is produced in-house, including breads, sauces, marinated meats – even Worcestershire sauces and mustards. For their fries, for instance, they soak the potatoes for 24 hours, then blanch and chill them and cook to order.

“Everything we do we do with a lot of love,” Krampe says. “We try to get the most natural products and make the product shine.”

Spirits are created the same way, with fresh herbs and seasonal ingredients. Their Bloody Mary consists of vodka infused with cracklins and onions and a house-made mix.

“If we could manufacture the air in here we would,” Krampe says with a laugh. 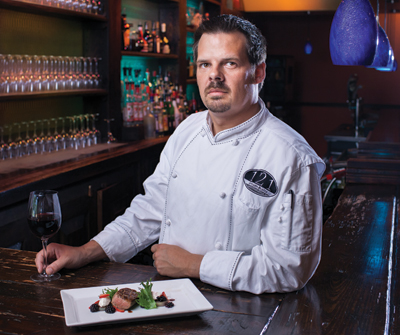 Chef David Phillips graduated from the Texas Culinary Academy in Austin, Texas, and Le Cordon Bleu in 2003. He worked in Galveston, Texas, for several years, including a stint at the Galveston Yacht Club & Marina. But when he wanted to raise a family in a more hospitable environment, he chose Lake Charles.

Phillips serves as executive chef at 121 Artisan Bistro, a chic restaurant that replaced D’Angelo’s when it burned down in 2009. The more upscale and diverse menu includes Italian dishes and pizza and also seafood and steaks.

“We like to tackle it as everybody deserves an experience when they walk in the door,” Phillips says. “We have something on the menu for you.”

Although primarily Italian with a Mediterranean style, the menu also includes specials such as a smothered duck, flash-fried oysters and a pork belly that’s braised and seared and served with beer-battered onion rings and a peach-chipotle sauce.

He incorporates local food sources as much as possible, particularly in the summer. He purchases Italian sausages and breads, for instance, from a Lake Charles supplier and cake pops and mini desserts from Lake Charles bakery Sweet Chic.

The move has been good, Phillips says, and he’s been enjoying the family atmosphere of Lake Charles as well as overseeing 121. He believes that alongside the new businesses sprouting up in Lake Charles, the culinary scene will flourish and grow.

“A lot of people are going to come from larger cities and will look for more variety,” he says. “It’s going to give us a little opportunity to push the envelope.” He adds with a laugh, “I push the envelope as much as they will let me.”