South Louisiana is a culinary mecca, and no one realizes that more than its residents, who cherish a good meal inside the home and at the many outstanding restaurants. This may be why so many jump into the restaurant business with little or no business experience.

Take Jacob Marcell for instance. The Morgan City oilfield veteran tried to retire last year when he opened Parrie’s Louisiana Grill in a former auto parts store on Brashear Avenue. As part owner in the restaurant – with Mayor Frank Grizzaffi and Steve Sweetster – Marcell thought Parrie’s would be the perfect retirement investment.
For the first three months he worked nonstop at the eatery and today the challenges remain.

“I’m not a restaurant guy; I’m an oilfield guy,” Marcell explains. “But I’m an eater. One thing I’ve learned about restaurants is there’s no playbook. For a restaurant to gel, it takes a year to where it becomes second nature.”

Alex Andrade of Lafayette hails from a restaurant family but his partner John Bienvenu’s heritage veered more toward department stores. When Bienvenu graduated in finance he thought about opening a gourmet food truck in Lafayette and then spotted the perfect location for his Rusted Rooster café. With their lopsided experience, they opened within months.
“We kinda jumped into it with both feet,” Bienvenu says.

For Mike Krajicek, it was more about coming home to Lake Charles, being part of the city’s exciting renaissance and serving up something new and different. The singer-songwriter didn’t have restaurant experience either, but always wanted his own business and loved the idea of serving hot dogs in new and innovative ways.

“Now the music is more fun,” Krajicek says of playing music on the side while he operates Botsky’s on West Pujo. “But the music and restaurant business go hand in hand – it’s all about creativity.”

One thing the following new Acadiana restaurants have in common is family recipes and dishes tested on locals and in competition to achieve perfection, from Rusted Rooster’s Bootsie’s biscuits to Chef Dean Terrebonne’s grilled redfish. Where owners may lack in restaurant operation experience, they make up in fabulous cuisine.
And residents have noticed. All four new restaurants are drawing in the crowds.

“The restaurant industry is a tough business to be in, especially if it’s Acadiana where there is good food on every corner,” says Bon Temps Chef Cupich, who hails from Albuquerque, N.M. “People are super nice, festivals are great and the food is fantastic.”

Maybe one of the reasons why our culinary scene is so outstanding is the number of passionate restaurateurs who aren’t afraid of challenges. 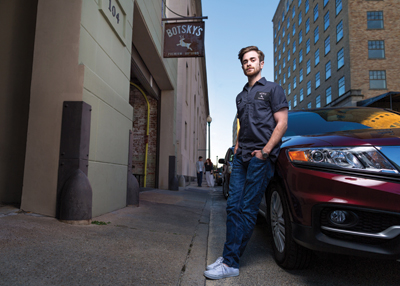 Mike Krajicek left his hometown of Lake Charles to pursue a music career, but two things kept sticking in his mind. Every town he lived in – Los Angeles, Nashville, Chicago – had gourmet hot dog establishments, and every time he visited his home state – even sans gourmet hot dogs – it was harder to leave.

Krajicek moved back to Lake Charles and started creating a Louisiana version of the gourmet dog, selling his unique creations like alligator dogs and crawfish étouffée toppings to outdoor festivals and special events. On June 14, 2013, he opened Botsky’s on Pujo, in the heart of Lake Charles’ downtown renaissance.

“Every city has their gourmet place, and I was super interested in them, so naturally when I came back this was what I wanted to do,” Krajicek says.

Botsky’s serves up “suggestions” such as the Intercontinental, a Kobe beef frank with avocado slices, Asian cole slaw, feta cheese and a housemade chipotle mayonnaise or the Chili Mac Daddy with mac and cheese, chili, onions and bacon. The menu, however, is pretty simple: Pick a meat served up in homemade casings, ingredients that range from Kobe beef to alligator, rabbit and venison, then add a topping or two, from traditional chili (made in-house) and relish to fried eggs, guacamole and Cajun slaw that’s been spiced and grilled.

“It’s a specialty niche restaurant,” Krajicek says. “You have suggestions or you can take it or leave them. It’s more or less build your own.

Krajicek is as much a philosopher as he is a hot dog connoisseur.

“It’s just something different, street foot taken to the highest level,” he explains. “We’re not trying to reinvent the wheel but make it fun, give it a new perspective. It’s all about the reinvention of the more common ideals.”

Next up for the entrepreneur is expanding his 1,200-square-foot space to include a prep kitchen for creating all his own product; he currently sells a “hybrid” of sausages, meats both purchased and made in-house.

“What I’m really trying to do with the prep room is having a full-time sausage facility,” he says, adding that creating all his own relishes would be part of the plan. “At least expand on what we’re doing now.” 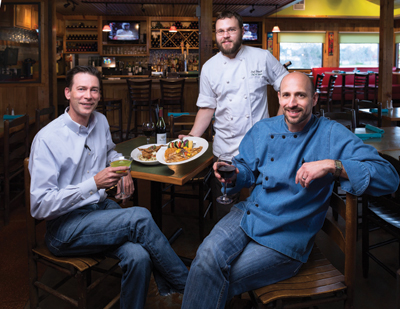 Like many Louisiana natives, Patrick O’Bryan and his brother, Steve, left the state only to realize the value of Louisiana’s culture and return years later. Together, they had an idea for “swamp edge cuisine” and decided to open a restaurant in the heart of Lafayette’s Southside. They experimented with dishes. including the “Pick Any Fish, Sauce and Choice of Two Sides” which marries fresh fish with sauces such as mango and satsuma Creole meuniere and toppers like crabmeat, crawfish and shrimp.

“It was kind of a whirlwind of a taste and decision process,” Chef Alexis Cupich says of developing the menu.

“Everything was tested out in Steve’s kitchen in Youngsville.”

Whatever the brothers worked out in those early days came together well, for there’s always a crowd at Steve n Pat’s Bon Temps Grill. Much of the menu cooked up by Cupich with help from “Miss Gloria” Parker veers from Louisiana comfort food to more sophisticated fare. There’s the crawfish pot pie, for instance, a large homemade pastry filled with Parker’s crawfish étouffée, and the apple and tasso-stuffed pork chops served with the restaurant’s signature fried sage sweet potato mash. 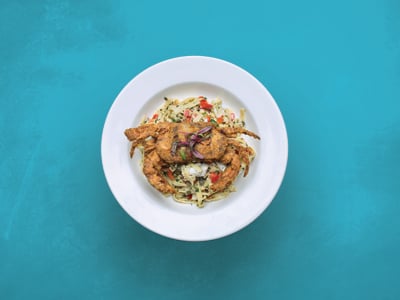 Bon Temps offers daily specials for lunch and dinner and changes out the sausage and boudin board biweekly, Cupich says. All desserts are made in-house, including Miss Gloria’s bananas Foster bread pudding with fresh bananas mixed with Myers Dark Rum and topped with ice cream and the house’s bananas Foster sauce.

Once or twice a week Cajun Food Tours stops at Bon Temps to teach participants about fried gator, serving up the appetizer anonymously to avoid prejudice, then explaining to the tourists what they have just enjoyed.

The small bar becomes lively at night with a happy hour, Monday through Saturday. And on Tuesdays, bottles of wine are half-price. 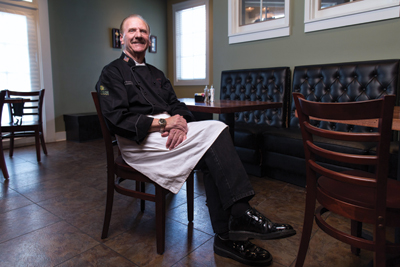 Morgan City is an expandable town, with a steady population of 12,000 that rises to about 20,000 on any weekday when oil industry workers visit. In fact, hotels have been springing up throughout the city and remain full Mondays through Fridays, says Mayor Frank “Boo” Grizzaffi.

Those workers make up the backbone for Grizzaffi’s latest business, Parrie’s Louisiana Grill on Brashear Avenue, serving up Louisiana specialties in a large, comfortable atmosphere. Grizzaffi opened the restaurant in early 2013 with Jacob Marcell and Steve Sweetser to give Morgan City another food option, one the partners felt was desperately needed.
“I didn’t do it to get rich,” Marcell says. “It was more to put it here because the city needed it.”

Because it’s locally owned and operated, the restaurant was a major learning experience, Marcell says. In February, the owners hired veteran Chef Dean Terrebonne, who worked throughout the country and overseas and taught culinary arts at Chef John Folse Culinary Institute at Nicholls State University, to take over the kitchen and bring the menu up a notch. They still serve the poor boys, gumbo and fried and grilled seafood they’ve been known for, but are adding daily and nightly specials so that every trip to Parrie’s will be something new for customers, Marcell explains. For example, Terrebonne brings a delicate redfish dish with shiitake mushrooms sautéed in clarified butter and topped with lump crabmeat that will be an occasional nightly special.

Other menu items that have become signature dishes include the crab cake dinner, two oversized crab cakes filled with lump crabmeat and lightly fried to a nice outside crisp, then topped with a spicy mayonnaise and more lump crabmeat. It’s a great dish to share, with a cup of gumbo to start. 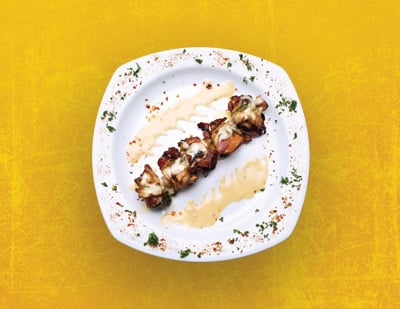 The restaurant is located in a former Advanced Auto Parts store, with an expansive main dining room, a equally spacious bar area with televisions and an event space in back that seats 48 people; the owners utilize it for special occasions and catering. On the walls are photographs of the early Morgan City seafood industry, gleaned from the city archives.

The owners are toying with the idea of a martini menu, live music and a “Lunch and Learn” series, during which companies sponsor a lunch and offer PowerPoint presentations on their businesses. With Terrebonne on board, they hope to beef up their catering business as well. It’s all to get the word out to the local populace.

“We’ve attracted the out-of-towners,” Grizzaffi says. “We need to convert that to the locals.” 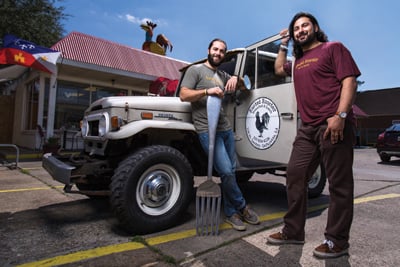 For John Bienvenu and Alex Andrade, opening the Rusted Rooster in Lafayette has been a family affair, dating back three generations. Andrade’s mother, Denise Landry, owns two Landry’s Cafés on Pinhook and Cameron, and his grandmother Bootsie developed mixes that she sold nationwide. Bienvenu’s grandparents Zerben and Gertrude Bienvenu owned Bienvenu Brothers in St. Martinville. Diners can spot these family members in photos throughout the restaurant. Their legacy is also visible in the 1973 Land Cruiser in the parking lot with giant forks and a marketing sign once belonging to Bienvenu’s father.

It was part of the plan to make Rusted Rooster, which serves only breakfast and lunch, feel like a corner cafe, Bienvenu says.

“We wanted people to feel welcomed, to have a homey feeling, and I think we’ve accomplished that,” he explains. “We wanted to be different from your average breakfast and lunch restaurant.”

Breakfast includes biscuits culled from Bootsie’s recipe, sometimes enjoyed with the café’s popular fried chicken or topped by their “Coullion” sauce, a homemade pecan-praline glaze. The Cow Island biscuit serves the biscuit open-faced topped with over-easy eggs and crawfish étouffée. For lunch, one of the most popular items is The Zerben, named for Bienvenu’s grandfather; it’s a Louisiana take on a Reuben. The fried chicken brings them in as well, fresh chicken that’s hand-battered and served a variety of ways. 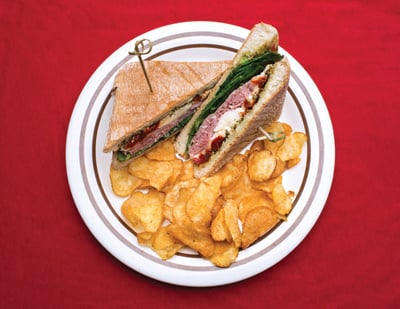 Space is at a premium here – there are seats for about 30 inside and 20 outside – and the kitchen only holds one oven and one stove. Breakfast begins at 7 a.m. and lunch changes over promptly at 10:30 a.m. Service ends at 2 p.m., and there are no weekend hours, allowing both owners to spend time with their families.

So far, the response has been positive for two Lafayette natives with longstanding Acadiana ties.

“Alex and I complement each other so well,” says Bienvenu. “This is where we want to be.”