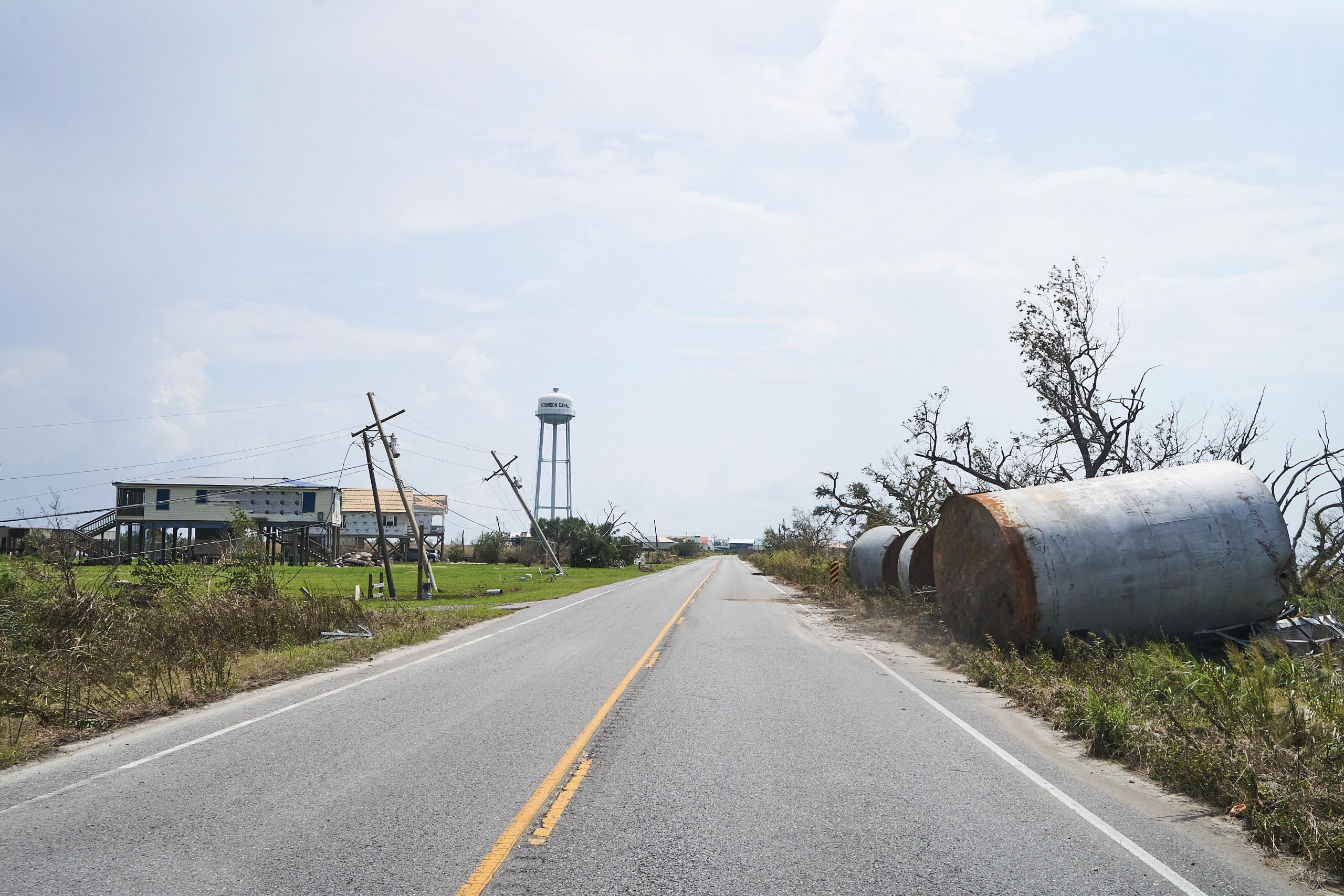 “Everybody covers New Orleans, but they’re ignored down here.” says Mark Porter, who owns a camp at Isle de Jean Charles. “People here are so used to not getting assistance, they don’t even ask for it. They just deal with it,”

Along Bayou Pointe-aux-Chênes, where some have lost everything, many have lost most, and power and water services remains rumors, tribal members at the Pointe-au-Chien Indian Tribe Community Center persevere with the grace of those who have lived on this edge before. At the top of the steps sits Theresa Dardar in a Pointe-au-Chien T-shirt and colorful dangling earrings.

“We’ve got everything anybody needs,” she says of what has become ground zero for relief efforts in lower Pointe-aux-Chênes. Yet a full week passed before essential items — water, food, clothing, toiletries, baby formula, feminine products, MREs and first aid kits — began to arrive.

“All the work here has been because of locals and volunteers,” Dardar says. “The roads are clear because of locals. We’ve had no government assistance. We’re just a little fishing community.”

“That’s what they say,” says tribal member Geneva LeBeouf, completing Dardar’s thought. Around them swarm several of the two hundred volunteers organized by Glass Half Full, an entity that converts recycled glass into sand to aid coastal restoration.

“We’re going to come out every Saturday until we get everybody back to a better place,” Says Glass Half Full co-founder Franziska Trautmann. Behind her, more volunteers park along the bayou, where an alligator swims past a partially submerged shrimp boat.

Farther south along the nearly impassable Highway 665, Greg Beuerman and volunteers from Rebuilding Hope in New Orleans (RHINO) have set up supplies at Live Oak Baptist Church. RHINO started after Hurricane Katrina to offer relief to disaster-stricken areas of Louisiana and, eventually, other regions in the United States in need.

“There’s been recent debate at church [St. Charles Avenue Presbyterian] about whether RHINO has outlived its purpose,” Beuerman says. “Then came Ida.” Looking from debris piled beside the bayou to a pallet of bottled water, he says, “It’s exhilarating to do this work.”

Several miles south on Island Road, Texans Mark Porter and his son Wesley have been, for the past week, the sole nighttime occupants on the ravaged Isle de Jean Charles. “We’re feeling lucky,” Porter says from his fishing camp deck, 14 feet high, as he surveys his neighbors’ losses. The house next door, on eight-foot stilts before Ida, now squats on the ground, bedroom exposed to the sun. On the other side of Porter’s camp, nothing but a concrete slab remains of the house destroyed last year during Hurricane Zeta.

A week passed before Porter learned about the extent of damage.

“There was no news outside of Pointe-aux-Chênes,” he says. “This is exactly what the [tribal members] complain about. Everybody covers New Orleans, but they’re ignored down here. People here are so used to not getting assistance, they don’t even ask for it. They just deal with it.”

Few of the island’s inhabitants have insurance or can afford to rebuild, Porter says.

“Nobody really knows what’s going to happen to the island. I’m going to stay until they run me off or until I can’t rebuild anymore.” He pauses to watch Wesley wade through shin-deep mud slathered over the cul-de-sac. “This place has become part of my life. This is the kind of hospitality you don’t get anywhere.”

Back at the Community Center, Batman Baumgard, a volunteer from Earth Angel, a company that focuses on sustainability in the film industry, says, “It’s hot. It’s hard to tell someone to do something for the environment. This hurricane went all the way to New York. We can’t keep doing this. This is the time for community and communication. People can help in any way.”

Boots on the Ground

There are many worthwhile mutual aid organizations working to provide relief and resources throughout the region to people affected by Hurricane Ida. If you are looking for ways to help, consider a donation to your favorite group or one of the below entities: