What happens when a Louisiana artist looks to the exotic tropical paintings of a 19th-century French artist living and working in the French Polynesian islands of the South Pacific? Delightful results, that’s what.

While scores of artists travel the roads and bayous of South Louisiana in search of that right scene or mood to capture on canvas or film, Lafayette artist Ramsey Ayers retreats not into the Acadiana landscape but into a mystical island called Juniper that exists only in her imagination. It is an Eden that she has continued to explore for almost two decades, all the while conjuring images of idyllic lives in an idyllic land. It is a “perfect world,” she says, where life is lived “in the simplest of ways.”

“I love creating Juniper Island,” says the 44-year-old Ayers, who was born and raised in Lafayette. “It’s my version of utopia — what I imagine a perfect world to be like. Life is simple and harmonic, joyful and worry free, colorful and happy. Family and friendships are absolutely everything. Time stands still. To see the world ablaze with such pattern and color would be a magnificent thing. It was never my intention to only paint one theme my whole life, but I never got tired of it.”

Ayers’s intense colors and tropical imagery reflect her fascination with the work and palettes of the 19th-century French artists Paul Gauguin and Henri Matisse.

“Gauguin’s work during his time in French Polynesia in the South Seas affects me like no other,” she says. “His colors, his subjects, the mood his art portrays, I want to live in that world he creates. I greatly appreciate the works of Henri Matisse as well for his use of pattern and bold colors. His work dances on the canvas.”

Unlike Gauguin and Matisse who used paint to create their exotic compositions, Ayers describes her work as mixed media collages. It is a fascinating process. To create depth, texture and movement she applies magazine cutouts, handmade paper, fabric, beads, sticks, paint and anything else at hand.

“There really isn’t much that I haven’t tried at least once,” says Ayers, who has created her imaginary scenes of this fictitious land since graduating in art from LSU in 2000. “I’ve even added old baby dresses, special letters, important maps, old postage stamps and family signatures on commissioned pieces. There are so many things going on in the paintings that you don’t see them all at once.”

Working in this “unconventional” way, she says, has opened a new world of art for her. It is a style and mythical world she continues to explore.

“In these paintings,” she says, “time stands still, colors of every imaginable shade dance across the canvas in temper-altering hues, and all that seems to matter is the love and peace one finds from family and friends. If even for a second you are drawn into their world, I hope it brings you the tranquility and serenity they have found.”

Ayers’ imaginary life on Juniper Island has brought her growing recognition. The Festival International de Louisiane selected one of her compositions for its official poster. In addition, her work has appeared in art gallery shows in New Orleans, Lafayette, Breaux Bridge, Lake Charles and Destin, Florida. She also receives numerous requests from families to create collaged compositions, placing them and their homes in her fantasy world.

“I have spent the past 21 years creating paintings that depict the life of a fictitious world,” she says. “It’s a land I find perfect in every way, my own idea of Utopia, you might say — the world of Juniper Island.” 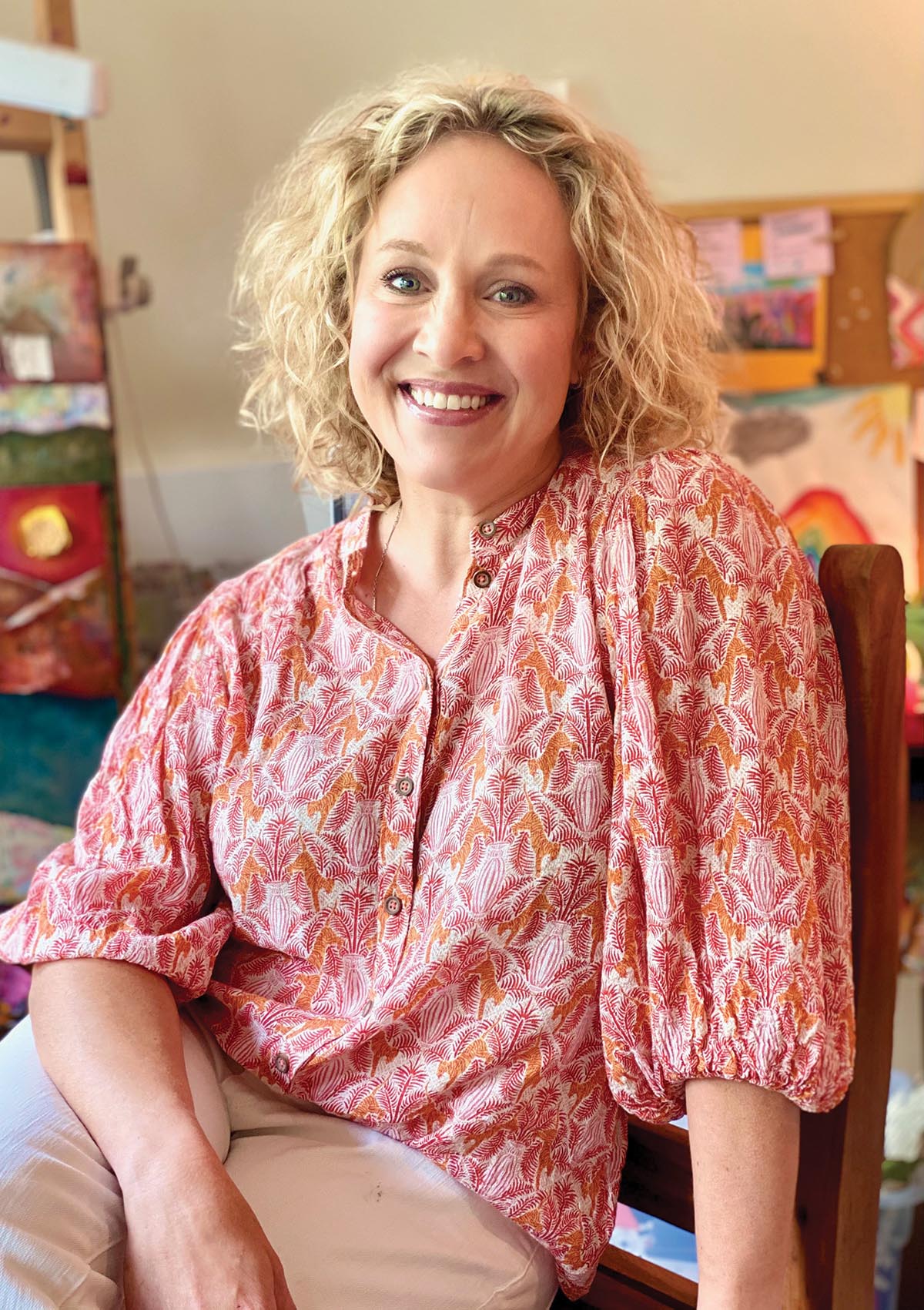