In what has become our now annual music guide, we decided to do something a little different. Rather than focus on venues, clubs and places to go, we chose to focus on faces to look for – and more importantly, voices to hear. In the music industry in general – and especially when it comes to Cajun music, women are outnumbered by men. Fortunately, their voices have been heard and met with praise – even Grammy nominations. All six of these women are carrying on the tradition of their Cajun ancestors and bringing it into the future, and we hope that the trend of women leading their own bands will gain momentum as they continue to inspire others. That, we think, is worth singing about.

At the age of 18, musician Jamie Lynn Fontenot was overtaken by the desire to learn Cajun French. “My grandparents, Mary ‘Mimi’ Fontenot and John ‘Toe’ Fontenot, from Opelousas are great, really strong Cajun speakers,” says Fontenot from her home in Lafayette. “My siblings and I wanted them to teach us Cajun French, so she would play me all these old Cajun vinyl records, and she’d tell me the stories the singers were telling in the songs. I remember she bought me this Canray Fontenot record – a really great old-timey Cajun fiddle player – and I started learning French through the songs.”

It seemed only natural, then, for Fontenot to follow up by teaching herself to play some of the songs, or at least the traditional Cajun style, that her grandmother had exposed her to, on the guitar.

“I also play a little fiddle, but not professionally,” says humble Fontenot who, now at 29, has now been playing Cajun music to enthusiastic fans for five years. Around Acadiana she’s known primarily as a singer and guitarist in Lost Bayou Ramblers bassist Alan LaFleur’s traditional Cajun outfit, Teechaoui Social Club, which formed just a couple years ago on LaFleur’s porch during a community boucherie – an 18-hour Cajun French party with about 100 people preparing and cooking traditional food and playing music.

When not playing with the energetic, dancehall-focused Teechaoui, Fontenot gigs as Petite et les Patates (Little and the Potatoes), a quieter three-piece traditional Cajun band.

Along with accordion player Jacques Boudreaux, Petite et les Patates also often features Fontenot’s husband, French fiddle player Samuel Giarrusso, who moved to Louisiana in 2012 from France to be near  his father, also a Cajun French musician. “Petite et les Patates is actually a constantly rotating band, where I am the only constant,” says Fontenot. “I usually am playing parties, so I just pick whoever I want to bring to the party – sometimes it’s people from Teechaoui, sometimes not,” she says. “I always chose to play really Old-School stuff, so I like three-pieces a lot: accordion, fiddle and guitar – no drum and bass.”

In explaining how her personal musical vision differs from that of LaFleur’s Teechaoui, she all but says her music is more feminine. “I like the prettier lyrics, instead of the more dancehall-ish singing,” she says, careful to clarify that she loves it all. “I am really into the Touchette family and the stories they weave into their songs. In my own band I focus on the lyrics and the singing.”

The Teechaoui Social Club is currently working on recording its first album in Lafayette, playing gigs at the Blue Moon as well as in New Orleans at Fontenot’s friend Effie Michot’s Mosquito Supper Club and the Tigermen Den.

Known for her lyricism and guitar skills, Jamie Lynn Fontenot is working on an album and performing around South Louisiana. 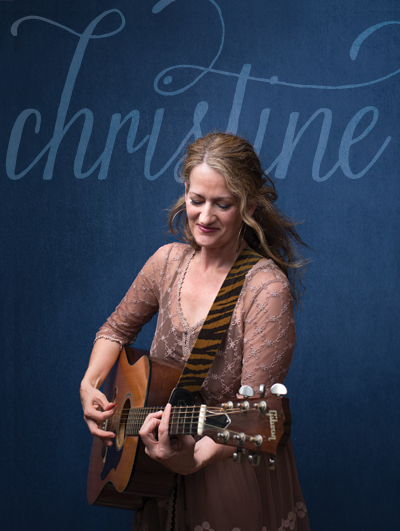 “My dad wanted me to play. But society in general was not as accepting as it is now.“

Christine Balfa’s father Dewey Balfa, who led Mamou band the Balfa Brothers, was once surprised by his 8-year-old daughter’s desire to play Cajun music. “He was one of nine children, and six were boys. Five out of the six played music, and three toured as the Balfa Brothers … playing dances, then national and international concerts to aid the revival of different types of American folk music,” says Christine Balfa. “I heard it my whole life; it was a part of my upbringing. I heard such great music, not just from my family but from the people they played with: international musicians dad had met on the road, he’d invite them back home to jam … So I was exposed to different kinds of music, people and cultures, and that really shaped my music and who I am in a lot of different ways.”

All the tools and influences were already under her roof. “We had instruments everywhere, and when I was 8, I started taking my first fiddle lesson – though the guitar was much more natural to me,” says Christine, who also plays accordion and sings. “My dad wanted me to play. But society in general was not as accepting as it is now. Luckily, I traveled and saw a lot of things, so I knew that things were changing.”

Christine and her family started Balfa Toujours (which means “Balfa Always”) in 1992, “the year that my father passed,” says Christine. “These are people I’ve been playing music with for 25 years. My sister sometimes plays with us. We often have my cousin from the Pine Leaf Boys, Courtney Granger. One original member was my former husband … That’s my family band and will always be a part of my life, because it’s my family’s music.”

But she deviates from her father’s path with her Grammy-nominated Cajun band, Bonsoir Catin. “My upbringing was very different from my father’s; we were 50 years difference in age. Our music is very similar … but I am writing about issues that happen in my lifetime and my perspective as a woman,” says Christine, who adds, “Bonsoir Catin is a majority woman group – five women and a guy drummer. We are much more active right now than Balfa Toujours. “This is my third record with Bonsoir Catin, and our latest record has a really unique sound, with original material. Both bands are dance bands,” she admits. “In Bonsoir Catin we have electric guitar and we always have bass and drums. Whereas with Balfa Toujours, we only have bass and drums at festivals – though we always have the twin fiddles…”

Though Balfa Toujours hasn’t played much in recent years, Christine is still making sure the family band will have future members. “I have two daughters who play, now,” she says. “They are puzzled by the idea that there are not many women in Cajun music – it’s hard for them to believe because all their lives they seen me playing with Bonsoir Catin, getting together with women to make music. I am very happy that in their minds it doesn’t make any difference.”

Christine Balfa has been Grammy-nominated. 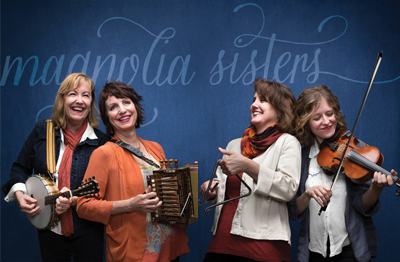 Louisiana historian Ann Savoy began the Grammy-nominated Magnolia Sisters traditional Cajun singing group with partner Jane Vidrine (guitar, fiddle, vocals) specifically to explore the feminine side of Cajun music. “It had a lot to do with proving that women can play music, too,” says Savoy, who has played music since the age of 10. “Cajun music and music in general is such a male-dominated field, we wanted to say ‘We can play a kicking dance too!’”

Currently living in Eunice, Savoy tours the world’s best musical festivals playing with her sons Joel and Wilson, plus her husband, accordion player and builder Michael Doucet (founder, in 1965, of Eunice’s Savoy Music Center) in their Savoy-Doucet Family Cajun Band. Savoy’s passion for Louisiana history also comes through in her work also as a photographer and writer, as evidenced in her book, Cajun Music: A Reflection of a People Volume 1, winner of the Botkin Book award and from the American Folklore Society. When she started her own band, she knew she wanted to share the stage with other women.

“I had previously been in a Cajun band, playing guitar,” Savoy remembers of how the Magnolia Sisters got together. “I wanted to play fiddle and accordion too, but the other people in that band were such virtuosos I felt intimidated. Also, I’d wanted to do some songs they didn’t particularly want to do.

“Jane and I, we’d get together to take care of our kids, and while we were watching the kids we’d play music together. We both liked the same old music and it just evolved into a band.”

Her musical partner Vidrine is also a folklorist, cultural activist and teacher. “I’m the biggest historian in the band, and Jane is currently working curating museum shows at the Natural History Museum,” brags Savoy of her partner’s extensive knowledge of Cajun culture. “She’s also a collector of historical music recordings. I first came to know her because she would book our band at a festival in Missouri, where she is originally from.” Vidrine’s life changed when she was given a job as director of the Louisiana Folklife Pavilion at the 1984 World’s Fair in New Orleans. “When she was booking the World’s Fair she met a Cajun musician, John Vidrine, and married him and moved here to Louisiana,” chuckles Savoy. “We Magnolia Sisters definitely like our Cajun men.”

Vidrine and Savoy’s other two “sisters” have, since 1992, been fiddle player Anya Burgess, of Arnaudville, who builds and restores violins and Lisa Trahan (bass vocals, percussion, accordion) of Grand Coteau.

Together, the Magnolia Sisters went out of their way to stand out this year on the Lagniappe stage at the New Orleans Jazz and Heritage Festival. “We played without a drummer, just because it was a smaller situation and we thought it would make a nice contrast,” explains Savoy, who says the crowd appreciated the pared down ensemble. “We thought it would bring out what we are, which is a strong band playing old-timey Cajun music.”

Jane Vidrine is recognized around Acadiana as a musician, folklorist, cultural activist and teacher.

Anya Burgess is not only a musician, she builds and restores violins.