Pondering a new place for the coin toss? We’ve got you covered with a list of six diverse venues to accommodate your personal viewing style. Our suggestions range from lively sports bars filled with cheering fans to the laid-back little neighborhood “Who’s ya daddy?” joints with bayou food and sporting Cajun camaraderie. Chances are, you’ll have more fun feeling the spirit of a high-octane football showdown at places where regulars welcome you into their inner realm like old friends — unless you’re wearing the other team’s colors.

Since the New Orleans Saints handed the Atlanta Falcons their first defeat of the season in October (31-21) and theirs is the oldest rivalry in the NFC South division, you may want to see the Jan. 3 game, when the Saints challenge the Falcons in Atlanta (for the close of the regular season) at an upscale sports bar filled with Who Dat fans and flat screens aplenty. The snazzy new Walk-On’s Bistreaux & Bar in Houma, which is co-owned by Saints quarterback Drew Brees, is a prime spot for viewing the face-off. It will also no doubt be hopping for Super Bowl 50.

Drew and his wife, Brittany, announced they were buying into Walk-On’s Enterprises as co-owners last May. The company caught their attention when the New Orleans Walk-On’s was voted ESPN’s “Best Sports Bar in North America.” Locations to date are in Baton Rouge, New Orleans, Lafayette, Houma and Shreveport, while Lake Charles is underway.

Brees foresees a national franchise. Saints fans may recall when “Hurricane Drew” reigned as the King of Bacchus XLII in 2010, just a week after he led the Saints to victory in Super Bowl XLIV, and was named MVP. Although the Saints won’t be marching into the upcoming Super Bowl 50, it will be held Sunday, Feb. 7, and coincides with Bacchus, which rolls at 5:15 p.m. Since the kick-off will be at around 3:30 p.m., Super Bowl fans and parade revelers may catch the last half on a mobile device (for the first time, NBC will be live streaming the Super Bowl halftime show, which will feature Katy Perry and special guest Lenny Kravitz).

Brees recalls visiting Houma the summer after winning the Super Bowl, and commented “how great the fans are.” The sprawling Houma Walk-Ons, which has an 8,000-square-foot restaurant and a large enclosed patio and beer garden, opened Sept. 8 with no less than 70 TVs, 48 beers on tap and an extensive menu. “It was voted the ‘Best Sports Bar in Terrebonne Parish’ less than a month after it opened,” general manager Brett LeBlanc pointed out.

“We’re not just passive investors,” Drew stated. “Brittany and I are committed to working closely with Brandon and the team to do whatever we can to contribute to Walk-On’s success going forward.” Brandon Landry and Jack Warner, the founders, were former LSU basketball teammates. Best bets among the starters: The seared Ahi Tuna medallions served over Asian mango slaw, spicy boudin balls with a side of Dijon horseradish, and the duck and andouille gumbo. There are specialty cocktails galore, plus burgers, poor boys, great salads, wraps and Louisiana specialties, the best of which is the blackened catfish Atchafalaya, topped with spicy étouffée and a pile of crisply fried crawfish tails, a favorite of Brees and his family. 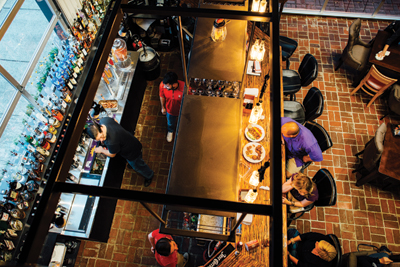 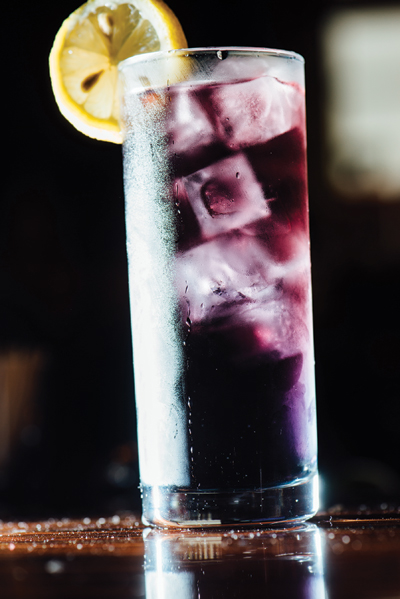 Whether you’re a newcomer or a longtime regular, chances are you will feel at home at Buck & Johnny’s in downtown Breaux Bridge. Owner Coatney Raymond, who took over in 2013 after her husband Johnny passed away, recently expanded and renovated the lounge, which now seats 60, and is adorned with deep leather chairs. It opened during Mardi Gras, 2015 and is flanked by a small courtyard that opens through garage doors. Named the Filling Station Lounge, it’s where fans gather for team spirit and handcrafted cocktails named after cars. “We stay open as late as the games are playing, and it’s always packed,” she says.

The property was originally a car dealership, so there’s plenty of antique car memorabilia, including the recently installed gas pump in the lounge, plus quaint lighting and signage throughout the restaurant, with its cathedral-height ceilings and fetching loft. The special events hall next door, the Glass Room (popular for weddings and political events), is located beside a large antique mall that is just down the street from Café des Amis, known for its weekend zydeco breakfast.

Although the lounge is normally jamming during both college and NFL games, the restaurant side is where most fans gather for football viewing, while simultaneously enjoying the delectable Cajun cuisine prepared by Chef Tony Savoy. He was formerly the head chef of Mulate’s in Breaux Bridge and New Orleans. Buck & Johnny’s previously focused on gourmet pizzas, and then added several Italian specials. Since Chef Savoy came on board, it has become the most popular restaurant in town, offering an expanded menu of authentic Cajun dishes and creative specials. Live music adds to the allure and so do the excellent martinis.

The pizzas are tops. For starters, order the crab portabella brie soup, made with a rich, creamy broth, or the award-winning zydeco gumbo. For the main course, try the blackened tilapia finished with a smooth shrimp basil cream, the zesty crawfish enchiladas with plenty of pepper jack, or the pan-fried crab cakes that melt in your mouth, enveloped in a fragrant pesto cream sauce. Be sure to grab a quart of gumbo from the freezer on the way out. 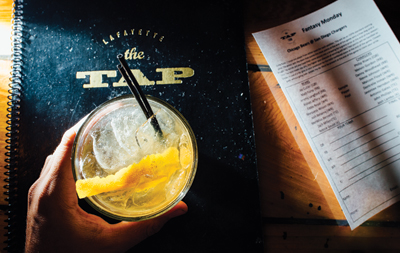 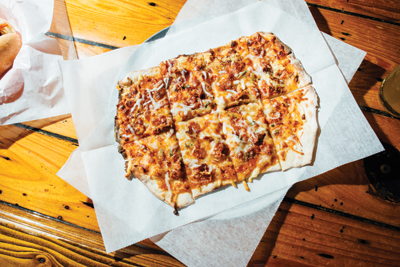 A popular gathering spot among the 20s and 30s crowd in Lafayette is The Tap Room in River Ranch, where you can play Monday fantasy football to your heart’s delight and watch the games with fellow fans without going downtown. The large windows give it an open feel. You can play shuffleboard, watch the game, and order a large variety of beers in addition to hand-crafted cocktails. Food selections include flatbreads and gourmet hot dogs served with kettle chips, but there are oyster-on-the-half-shell specials when available.

General manager David Savoie creates drink specials tied to the seasons (he was formerly with Social Southern Table and Bar, known for their superb hand-crafted cocktails). He is rather proud of the Tap Room’s extensive selection of beer, which includes international lagers and pilsners, American crafts and ciders, and international ambers, ales, porters and stouts, plus a design-your-own flight of 4 draught beers. Upscale yet casual ambience; it can get a tad loud evenings. 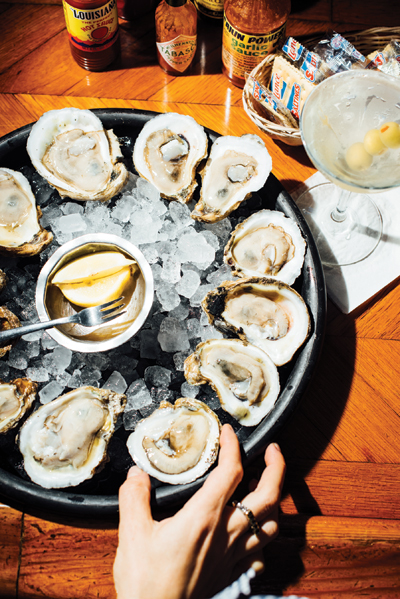 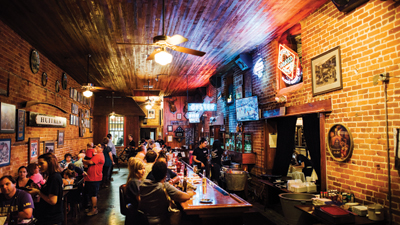 In Vermilion Parish, if you want to catch a college game and enjoy some excellent seafood among major LSU fans, stop by the recently reopened Black’s Oyster Bar across from the “big” church, just a half-block from picturesque Magdalen Square. Fighting Tiger die-hards continue to watch the college games with spirit, even though LSU’s star running back Leonard Fournette’s grip was loosened on the Heisman Trophy when he was overpowered by Alabama’s Crimson Tide defense in November. There are always the playoffs.

Black’s 44-foot bar, frequented by ultra-friendly locals, is flanked by a couple of large flat screens and several dining tables, which are taken once the adjacent, cavernous restaurant fills up on weekends and during Thursday karaoke nights. The new owners, Corey Gardener and Chance Thomas, have gone all-out with renovations and the food, so just about everything is tops on the menu, and the lunch specials are always generous and reasonably priced. Of course at Black’s, you should start with their pride and joy, the plump, salty Grand Isle bivalves on the half shell that you can also order in three styles of chargrilled (they’re a sure match for Drago’s in New Orleans).

The Bloody Marys are legendary, good for any time of the day or night, and the bartenders are skilled at whipping up whatever cocktail you desire. Drink specials run throughout the week. Starters to nibble on during the games include the spicy etouffee balls, crisply fried frog legs, tender strips of fried rabbit laced with Hebert’s Specialty Meats seasoning, and the shrimp en brochette. The earthy, dark chicken and sausage gumbo will warm you up on a cold winter’s night. The oyster poor boys, seafood platters, salads topped with grilled shrimp and tuna, crawfish or fried oysters and juicy steaks topped with crabmeat are all sure bets.

Eat This raw oysters: Enjoy a dozen salty, plump oysters on the half-shell fresh from Grand Isle.
Drink This The Mosquito Bite: a refreshing mojito made with Bayou Silver Rum and fresh mint 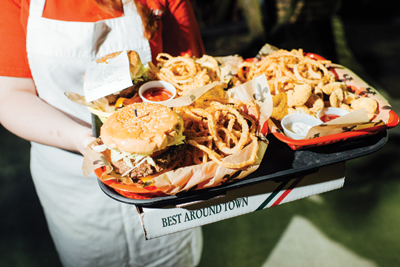 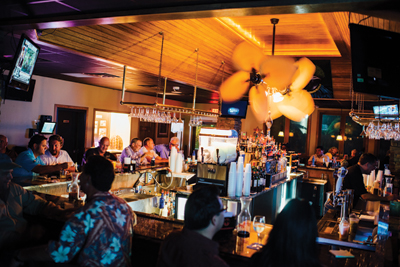 If you’d like to catch the NFL games off-the-beaten path overlooking the water, and sit beside a roaring fire, head to Loggerhead’s Bar in Lake Charles on the Calcasieu River. This casual spot is a big Saints hangout, but they also tune into the college football games.

You can get there by car or by boat and pull up right to the dock, where the Lady of the Lake three-decker 102-foot yacht, rented for evening dinner cruises and private parties, is parked. It usually goes out once a month but is especially popular during the holidays. Live music on Sundays usually starts around 4 p.m. on the patio, and there are live local bands several times during the week, from Cajun French bands to jazz ensembles. Although it’s not a full-service restaurant (you order at the concession stand and bring it inside), the staff occasionally has prepared specials such as chili, gumbos or pig roasts for parties. Pizzas and above-average burgers are served, as well as boiled shrimp, pulled pork and chicken wings, served in baskets lined with fleurs-de-lis in honor of the Saints.

Inside the bar, there are a couple of fireplaces where you can warm up on a chilly winter night, while the outside deck offers splendid sunsets, gorgeous views and a patio with a tiki bar. Locals often drive up to the dock on their boats, and use the bait stand that sells fuel, ice, tackle and supplies. Some beautiful yachts pass by at night. This small, casual bar is popular among locals who prefer watching the game at a non-sports bar, with the added allure of a water view just about 15 minutes from downtown Lake Charles. Owner James Mistretta has mentioned that he may be planning an expansion of Loggerhead’s bar to include an eventual restaurant and resort with cabins, so stay tuned.

Eat this Burgers: Big and juicy with onion rings and fried seafood spiced just right.
Drink this Gator Bite cocktail: Refreshing yet powerful  and containing three kinds of rum distilled in nearby Lacassine: Bayou Rum’s Silver, Spiced and Satsuma rums are blended with orange and pineapple juices and Grenadine, served on the rocks

If you’re a fan of the college football bowls (Dec. 19-Jan. 2) and plan on following the Jan. 11 College Football Playoff National Championship (which Dr. Pepper has paid a whopping $35 million for sponsorships through 2020), you’ll want to watch the games where the casual college fans geaux. Fat Pat’s Bar & Grill on Verot School Road is the spot. Both college and NFL fans gather at this iconic sports bar for team camaraderie. You’ll find plenty of flats screens, and also an individual TV in every single booth, which allows you to watch any game that’s on.
Younger fans tend to gather at the second, newest location on Westmark Blvd., where there are six TVs on the patio.

Specialties are the burgers (ask for the unusual but surprisingly good peanut-butter-and-bacon burger or the signature Mile High burger, which is layered with pepper jack cheese and a trio of grilled yellow, red and green peppers, then dressed) and the hot dogs (try the Dome dog, made with andouille, and topped with red beans and Creole mustard). If you’re not in the mood for dogs and burgers, order the shrimp grilled in garlic butter, dressed and served on a sweet bun. Good bar food, but the main attraction is the atmosphere that includes sports memorabilia, fans and especially those booths with individual TVs.

Categories: Cocktails, Restaurants, Things To Do