Debbie and David Heard’s world came crashing to a halt when their 12,000-square-foot antiques store and restaurant in Thibodaux burned to the ground in December 2010. They lost everything, from the irreplaceable antiques to the 200-person banquet room.

Since the fire, the couple has moved their business once but recently found what they consider to be a permanent home at 6815 W. Park Ave. in Houma. The new Demitasse Café marked its one-year anniversary in March.

“We are really excited about the patrons in Houma,” Debbie Heard says. “It’s wonderful. We love it here. It’s been a very good move for us.” 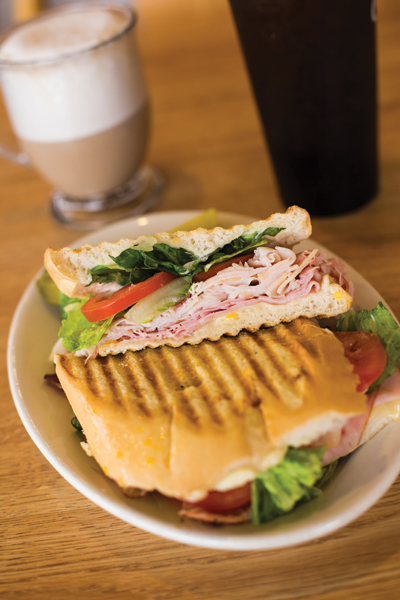 The Demitasse Café still serves up 30 different types of panini, soups and salads for lunch and dinner, plus a varied breakfast menu that ranges from breakfast sandwiches to build-your-own omelets. As before, the Demitasse offers a huge drink menu of specialty coffees, teas, smoothies, milkshakes, Italian sodas and much more, Debbie Heard says.

People drive over from Thibodaux to enjoy their familiar restaurant, asking when the Heards will move back or open a second location back up the bayou.

“They complain all the time, [asking]why we’re not back in Thibodaux,” says Debbie Heard, who won’t commit to whether they will open again in Thibodaux. “But after the fire, we live day by day. You never know when it will all be taken away from you.”

South Louisiana offers a vibrant culinary scene, with outstanding chefs; ambitious restaurant owners; and an abundance of fresh produce, seafood and meats. It’s no wonder residents incorporate food into every aspect of their lives, celebrating seasonal dishes such as crawfish and rice, honoring culinary flavors in numerous spring festivals and enjoying the popular restaurants that dot the landscape from the Mississippi River to the Texas border.
Here are a few new restaurants that have recently opened in Acadiana. 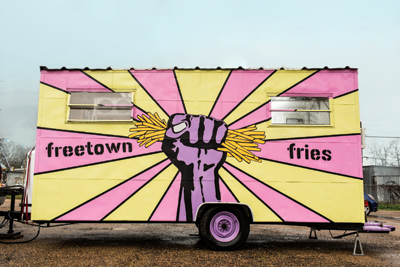 The gourmet food truck scene has exploded in Lafayette, beginning quietly about a couple of years ago with trucks such as Viva La Waffle serving unique sandwich fixings on waffles and now stretching to about a dozen trucks on any given day. A roundup of most or all of the trucks, sponsored by E’s Kitchen, a store offering kitchen accessories, is held the first Saturday of each month in the parking lot of Parc Lafayette, attracting quite a crowd.

For Marla Kristicevich, the idea for her Freetown Fries truck began in Portland, Ore., where a gourmet food truck trend was happening. She envisioned a similar culinary fad for Lafayette given that the town is known for its festivals and outdoor music events.

Kristicevich serves up meals based on fresh hand-cut french fries that are lightly fried in peanut oil and range from Poo-yie Fry with beef roast gravy, queso cheese, green onions and a dash of cayenne pepper to Mediterranean Fry with garlic hummus, feta cheese, olives and spices. On Fridays, she serves catfish and fries, a Cajun take on fish and chips. For Mardi Gras, her King Cake Fry featured sweet potatoes with a multi-colored glaze on top.

The idea for Freetown Fries actually had its origins in Canada, where the original Cajuns lived before being expelled by the British and heading to Louisiana. Poutine is a French-Canadian dish of french fries topped with gravy and cheese. Kristicevich wondered why Cajuns didn’t enjoy french fries the same way, although Freetown Fries’ version may be more flavorful and inventive than its Northern kin.

“Mine are fun and creative and the Cajun cousin to the Canadian poutine,” she says. 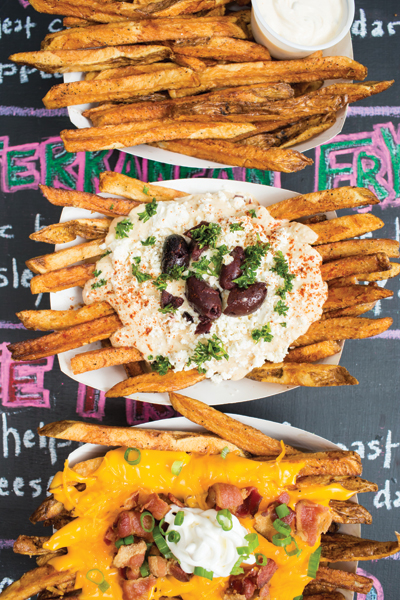 Freetown Fries, like many of the new trucks on the market, uses fresh ingredients and a healthier way of cooking. Kristicevich uses nothing frozen, for instance. “It keeps me honorable,” she says.

The name of the truck comes from the Lafayette neighborhood in which Kristicevich lives.

Even though she loves her mobility, Kristicevich’s dream for Lafayette is a city park where the trucks can gather on a regular basis. “I think it would be a smart choice to make,” she says. “It’d be a nice draw because we’re such an eat-friendly town.”
Most of the Lafayette trucks can be found on Facebook, and they announce their locations daily. For the monthly roundup, visit E’s Kitchen’s website at eskitchen.com. 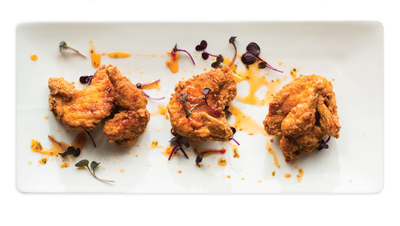 Their first establishment is Social Southern Table & Bar, “a chef-driven bar” aimed at ages 25 to 40 “and the young at heart,” Goodson says. Social Southern is more fast-paced than a restaurant, he says, but also offers a sophisticated menu along with such specialty cocktails as the Social Sazerac and Blackberry Bourbon Lemonade; wine flights; and a large variety of wines, beers and upscale liquors.

“We have great bars in town and great restaurants in town,” Goodson says, “but we wanted to do something in between.”

The menu by chef Krampe consists of “Speakeateries” appetizers; specialty sandwiches and salads; flatbreads; “Supper Plates” featuring items such as Guinness-braised pork; and “Social Fixins” for two, such as Mac-n-Cheese with pepper, sake and aged white cheddar.

Goodson says the most popular items have been the Smoke Fried Chicken-n-Foie Gras Biscuits and the flatbreads, which are created on-site in a 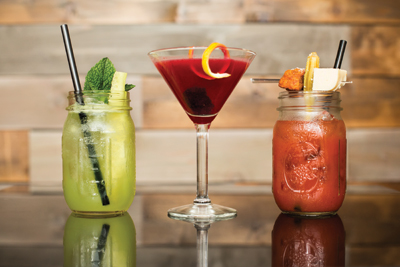 wood-burning oven. The restaurant also makes its own breads, with the exception of the poor boy loaves, which adds to its popularity, Goodson adds.

Social Southern is open for lunch and dinner at its Johnston Street location, halfway between downtown and the Mall of Acadiana. 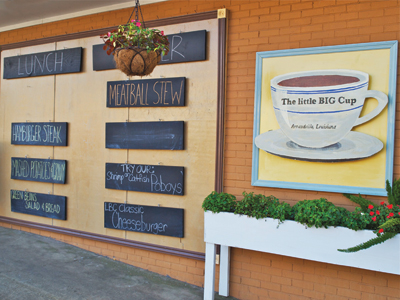 Arnaudville is located at the confluence of bayous Fuselier and Teche east of Grand Coteau and north of Breaux Bridge and Cecilia. Over the years the historic town has developed into a vibrant arts community with the NUNU Arts and Culture Collective developed by artist and native son George Marks, Tom’s Fiddle & Bow and several arts-related festivals.

There are locally owned and operated restaurants in town, including Russell’s Food Center with its popular plate lunch special. But the opening of The Little Big Cup café and coffee shop in the heart of town was like a shot of espresso, pumping life into the community and providing a gathering place that’s open well into the night.

The café is run by Kevin Robin, an Arnaudville native, and his New York-born partner Sanjay Maharaj. Robin’s family owns Russell’s, which includes a catering business, so the two envisioned opening a café with the catering business inside, Maharaj says.

After The Little Big Cup opened in October, the response was overwhelming; the café’s lunch and dinner specials were just as in demand as their coffee offerings and desserts, Maharaj says. Since the restaurant end has taken over, the partners have purchased the building next door and moved the dining area there while keeping the original space as a café, with comfy chairs and couches. The catering business will continue out of the expanded kitchen, and there is now outdoor seating by the bayou. 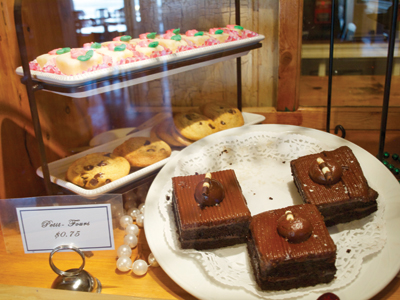 What has made The Little Big Cup so successful, Maharaj says, is the reasonable prices and the specials in addition to the set menu. The café provides well-balanced meals for $5, he says, plus experiments with specials such as offering Chinese once a week since Arnaudville doesn’t have a Chinese restaurant.

They are currently working on obtaining a liquor license for the dining area.

“So far it’s been going really well,” the New York transplant says, adding that he loves his new home. “People are so nice, the food is wonderful, and I have more time to enjoy the simple things of life.” 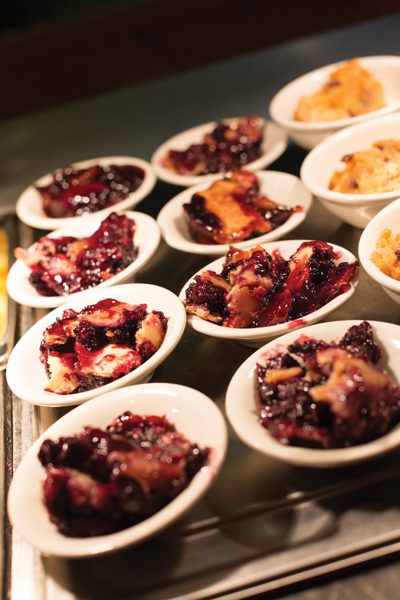 Although it’s been around since 1969, we’re classifying Landry’s Seafood and Steakhouse as a “new restaurant” because chef Alex Patout has revitalized it since he took over. Patout, who operated restaurants in New Orleans for 25 years, lost everything when Hurricane Katrina came to town, and New Orleans’ loss was New Iberia’s gain when Patout decided to move back to his hometown. Landry’s, which is not affiliated with the chain of Landry’s seafood restaurants, is owned by Dave and Grace Landry and managed by Elaine Buteau. Located off Highway 90 at Jefferson Island Road, the restaurant focuses on authentic Cajun with the popular Maw Maw’s Lunch Buffet on weekdays and the Cajun Camp Fish Fry Friday lunch, among other menu items.

“Our motto is ‘fresh and wild,’” Patout says of the menu, “whatever we can get indigenous.”

That means fresh catfish from Loreauville, oysters from Plaquemines Parish and jumbo crawfish from a Henderson processing plant. Patout even buys his vegetables from the Iberia Parish Prison, raving about the fresh mustard greens.

“We are a true Cajun restaurant in Cajun Country,” Patout says. “We want people to feel there is something that’s really designed for people to get a taste of the culture.”

Patout opened his first restaurant in New Iberia in 1978 and won acclaim and invitations to cook for several world leaders. Food & Wine magazine named him one of the Top 25 Chefs in America. He later opened Alex Patout’s Louisiana Restaurant in the French Quarter of New Orleans but lost the business in Katrina.

There are several new restaurants that have opened in Lake Charles within recent months, including three on Ryan Street. Tuscany Italian Restaurant at 3905 Ryan (337/478-0303) offers a variety of traditional Italian cuisine with hearty pasta dishes and fresh, homemade garlic bread. Siam Restaurant at 723 Ryan (337/214-6087, facebook.com/siamrestaurant723), closer to downtown, serves up a variety of Asian specialties from Thailand, China and Vietnam. The elegant wine bar Heist at 700 Ryan (337/437-7633, facebook.com/heistwinebar) opened at the end of March with specialty cocktails and hors d’oeuvres in addition to its wines.

Dharma at 329 Broad St. (337/433-3144, facebook.com/dharmalc) serves up farm-to-table fare, including artisan pizzas, stromboli, calzones and salads, sometimes accompanied by live music, from 8 p.m. to 2 a.m. Wednesdays through Saturdays. The motto of Dharma, appropriately, is “feed your soul.”

Cousin’s Lebanese Cuisine at 2612B Kirkman St. (337/437-1144, cousinslebanese.com) offers Mediterranean and Lebanese cuisine including a variety of kebabs, tabouli, hummus and wraps. The name refers to owners Sam and George Homsi, natives of Lebanon who moved to Lake Charles about 30 years and were assisted by George Abraham, a first cousin to Sam and George’s grandfather. Abraham called the two “cousin,” and the name took.

LeBleu’s Landing and Sausage Link Specialty Meats at 202 Henning Drive (337/528-6900) in neighboring Sulphur offers Cajun cuisine standards such as boiled crawfish and seafood gumbo along with an oversize buffet and a full-service meat market. Visitors may choose between a sit-down meal or grabbing some boudin to go.