The Middle Of Here

Though accurate, it’s somewhat peculiar that Morgan City’s own website prominently displays how far (or close) it is to other towns in Louisiana, trumpeting that the feisty Acadiana hamlet is, “Right in the Middle of Everywhere.”

Check the map. Technically it’s true. Seventy miles to New Orleans, a scenic, pretty and at moments Instagram-worthy drive. Sixty miles west to Lafayette, and about the same distance to Baton Rouge, as well. Morgan City’s geographic convenience is undeniable, but before you rush off to leave, take a second to talk to the locals. They’ll be quick to share that most everything we’re seeking can be found without filling up the gas tank.

Need a community with affordable housing and a sound educational system? Look no further than Morgan City’s mix of old neighborhoods and newer subdivisions that sprung up during the last decade thanks to a flourishing energy and shipping sector.

Looking for a decent-paying career? Until recently, Morgan City’s unemployment rate was a positive outlier compared to the rest of the country, immune to the perils of elsewhere thanks to the aforementioned happy days in the oilfield. Even today, with the price of oil only now finally getting off the mat after a wicked freefall, Morgan City and St. Mary Parish are labor importers. At the beginning of 2015, Morgan City’s nonfarm jobs increased by 120 to around 23,600.

And lastly, say you want to treat your man or spoil the little lady with a night on the town. Well, how about this town? Yes, Morgan City. Ambitious and loyal entrepreneurs have breathed new life into downtown, as bars, restaurants and regular live music events provide even more options for residents besides the standard festivals, outdoor activities and historic landmarks.

“You know how they say they wish it was like the old days? Well, it’s like that here,” says Morgan City restauranteur Brian Blanchard. “You know your neighbor and you pull together when you need to. Everyone looks out for everyone else. They know you, but they care about you, too.”
That All-For-One philosophy – along with everything else mentioned above – is the reason why Morgan City is Acadiana Profile’s City of The Year, joining Houma, Lake Charles and Lafayette as recent winners. Like many areas of Acadiana, Morgan City’s economic health is partially tied to the fortunes of the oil and gas industry, and therefore has felt the effects of the drop in price per barrel. Civic leaders painted a realistic picture of the area’s current state, but even in doing so, found the romance in a community that’s been tested many times before.

“This is a town built on perseverance,” says Frank Fink, Director of Economic Development in St. Mary Parish. “Hard work is respected, and for those who do work hard, they get a quality of life that you don’t find everywhere, with the many leisure activities all around us…We’ve experienced the good times and we’ve experience soft times in the oilfield and we’ve handled both situations.” 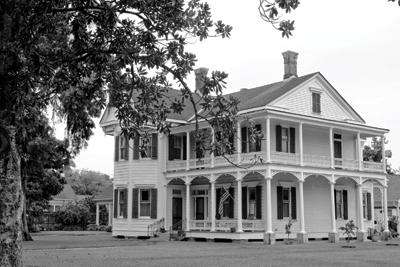 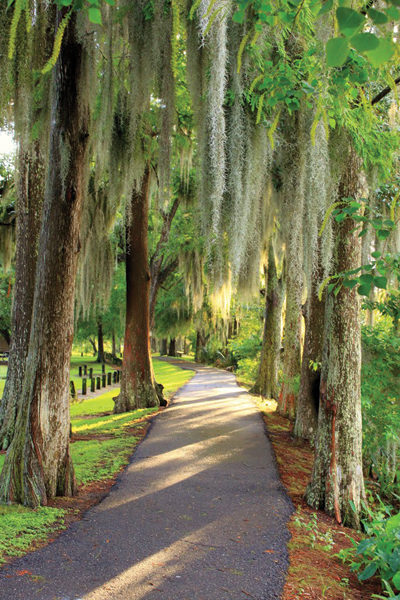 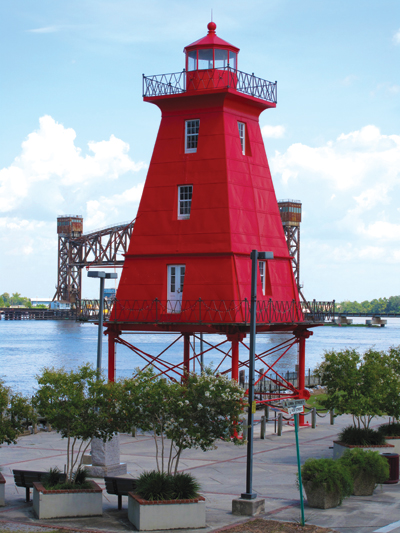 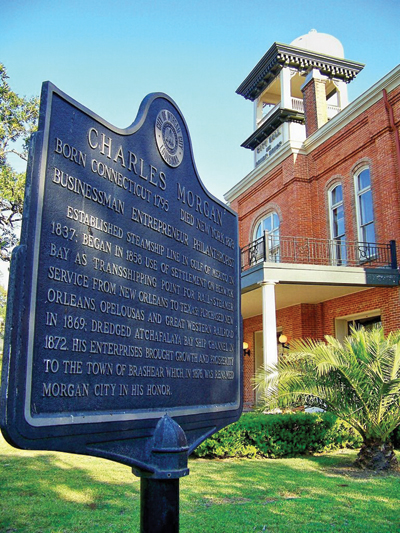 With a population of about 12,000, Morgan City is a place that’s gaining momentum as more and more people realize how nice it is to live there. With historic architecture, nature hikes, waterfront views and a thriving arts scene, the city has a small-town feel with some cosmopolitan elements.

Photos by Alysha Jordan, Will Noble, and Janice Scribner

Morgan City is Built for Business
The town of 12,000 is ideally located, sandwiched near the Atchafalaya River and the International Waterway. Morgan City is the home of the Port of Morgan City, offers easy 4-lane road transit to the east and west, and features a Class I rail system. According to the Louisiana Workforce Commission, one in nine St. Mary Parish jobs was in the natural resource and mining operations field (translation: energy/oil and gas), which explains why the unemployment rate inflated by 1.6 percent during the year.

“From 2008 to really 2013 and 2014 – until the recent collapse of oil – we’ve seen a growth in our labor force here, which is a good thing,” Fink says. “And it’s still above what it was in 2008. But there is a softness in the market now, and some people are losing jobs. But the shipyards are still doing well and there’s a lot of economic progress going on.”

“These students are taking courses that are needed by the industries that fill this community,” Fink says. “These are students looking to learn a skill that will land them a good job and allow them to be a positive part of Morgan City and the parish.”

“The construction business has been a shining light over the recent year,” Fink says. “With everything going on in the oilfield, things are still being built, so it mitigates some of the pain and provides jobs. Projects are still moving forward. And that’s necessary, because we know oil and gas is cyclical and when times are good in the oilfield, you have to have the infrastructure and everyday necessities – places to live, places to eat, ways to get around, things to do.”

Morgan City is exceptionally enticing to fishermen. Carrie Stansbury of the Louisiana Tourism Coastal Coalition notes that it’s conveniently close to the the Atchafalaya Basin. Fishermen can cast reels in both fresh and salt water thanks to the numerous charter services in the area.

Photo by Will Noble

Gathering Momentum
Brian Blanchard would be lying if he said he wasn’t scared. Blank canvases/unchartered waters/undefined paths do that to entrepreneurs. They also inspire them.

Where others saw plight and dilapidated buildings along Front Street in 2001 – a place so rough Blanchard wasn’t even allowed to venture down it as a teenager – Blanchard saw opportunity. The restaurateur who grew up in Morgan City just cut his business teeth in Lafayette by opening up Imonelli in Lafayette in the late 1980s, envisioned an upscale eatery perfect for dates, a nice place to start a memorable evening out, the kind of place you used to have to drive out of town to find.

What Blanchard envisioned was Café JoJo’s – a Cajun Grill and Bar that served as the first breath blown into the resuscitation of downtown Morgan City.

“The community support from Day 1 was truly amazing and a real reflection of how special and how passionate the people of Morgan City are and continue to be,” Blanchard says. “Their enthusiasm makes it easy to want to find other ventures to do here – plate lunch restaurants, a dinner theater – there’s just so much potential all around us. Gets me excited just talking about it.”

On weekends now downtown, Blanchard describes a scene of soccer moms jogging along the seawall, young couples walking their dogs, and people congregating to listen to live music at Morgan City’s weekly Rhythms on the River series on the banks of the Atchafalaya.

“Really and truly my goal is to make downtown an area that on any night of the week you see people. Go on a Monday night and it looks like a Friday night with the folks walking on. That’s the dream. And really, as far as industry like oil and gas and the entertainment and service business, one hand washes the other. To lure those large employers, to lure the young professionals and have the educated types, you need a thriving nightlife – things to do downtown.

For all that is new and hip, the highlight of the Morgan City social calendar remains the annual Shrimp and Petroleum Festival, the oldest state-chartered harvest event in Louisiana. Every Labor Day weekend, visitors in the tens of thousands descend crowd Highway 90 to partake in the raucous music, exciting parades on both land and sea, the blessing of the fleet and enough good food to fill you up forever. 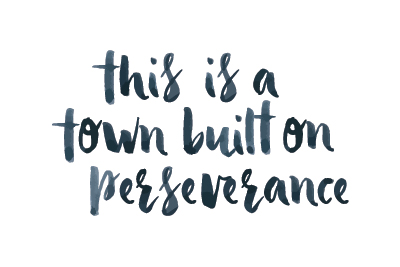 “It’s a weird combination for a festival to everyone except Louisianans,” says Carrie Stansbury of the Louisiana Tourism Coastal Coalition. “We know the fishing opportunities that exist by oil platforms. But it’s just a fun time. It’s a chance for us to celebrate the people that work in those two industries and a chance for us as a town to show the rest of the state the class, the welcoming nature and that there’s always something memorable to do down here.

“And that’s not an accident,” Stansbury continues. “We want people to come. There’s so much to offer here. We’ve always been the southern-most gateway to the Atchafalaya Basin, so that beauty is all around us and it’s something we want to share.”

Morgan City is a popular destination for outdoorsmen, particularly fishermen who can cast reels in both fresh water and salt water in the same day thanks to the numerous charter services around the area.

“No matter how long I’m gone, no matter what’s happening with me, every time I show up at home, it’s like I never left, you know?” Blanchard says. “The people are so kind and warm. Morgan City did a lot for me. You get your personality from this place, your work ethic, your drive, your ability to take tough times and handle them and rally back. The community is responsible for all of this, and all I can really say is, ‘Thank you.’”