Anytime in Louisiana is a good time to party, and no time is better than in the spring when the weather is at its best. Festivals are slated for just about every weekend. Music fans head out to New Orleans for the annual Jazz & Heritage Festival (one of my personal favorites), where food booths are almost as popular as the band stages. Another favorite of mine is the Festival International de Louisiane in Lafayette. There is a festival for just about anything and everything. You can hear good music and eat what I call “walking food” in big cities and small towns all across the state.

Another of the telltale signs that spring has arrived in South Louisiana is the aroma of outdoor cooking. Take a deep breath. Ah, someone’s boiling crawfish or crabs. Another sniff will tell you that shrimp is sizzling on a grill. Then from up the bayou wafts the smoky essence of barbecue.

The warm days of springtime are welcomed with open arms in the Deep South. One day the landscape is bleak and gray; the next it’s alive with a kaleidoscope of color. Clumps of red clover pop out along country roads and interstate highways. Wild dogwoods with blossoms of pale pink and chalk white appear out of nowhere. And azaleas of bright red and pale pink flourish here, there and everywhere. No one needs to be cajoled into cooking and dining in backyards or on patios or decks shaded by majestic live oaks and regal bald cypress trees.

Everyone is eager to fire up the old grill and take to the outdoors. With Louisiana’s proximity to the Gulf of Mexico and a spider web of meandering bayous and rivers that crisscross the state, there are always a few fish, some shrimp or a hamper of crabs at hand that will undoubtedly end up on someone’s table.

I take great pleasure in explaining to visitors that people in South Louisiana share the philosophy that it’s best to live to eat rather than to eat to live. Men and women both can prepare a feast in short order without so much as glancing at a cookbook. Cooking is as natural as breathing and just as important.

For example, here life’s experiences and adventures are more often than not marked by food-related occurrences.

Take, for instance, the time I accompanied some old friends on an expedition to their “crab hole” near their camp, situated in the great marshland area that composes the state’s southern coastline in Vermilion Parish.

We left before dawn and traveled for nearly two hours in order to arrive at the crab hole just as the sun began its ascent in the eastern sky. Working quickly, we baited our nets with chicken necks and set them out in the water that was bubbling with crabs and fish. By midmorning, our hampers were filled with close to six dozen blue crabs. Sweat was rolling down our necks, and our arms were tired from pulling in the nets, but we had worked up a great appetite.

In short order, my friend Henry had a fire going in an old barrel-type barbecue pit at the camp. Like a drill sergeant, he instructed us on how to prepare the crabs, and in due time, we were chomping down on a mess of incredibly delicious barbecued crabs bathed in a spicy butter sauce. No one moved until we were more than satiated.

The few crabs that were left over were thrown into a simmering pot of gumbo. Yes, we planned to eat again later, in the cool of the evening after the sun sank in the western horizon.

Then there was the time that a group of us found ourselves on a shrimp boat on the opening day of the season. It was hard work: pulling in the trawl nets, sorting and sifting and then packing our catch in crushed ice. By the end of the day, our mouths were watering for chevrettes. Some were boiled; others were fried. The tiny ones were combined with homegrown eggplant, mirliton (chayote) and okra for side dishes. The larger ones were threaded on skewers and brushed with herbed lemon butter. Grilled to perfection, they were superb tossed with pasta and grilled vegetables.

When warmer weather sets in, there is nothing better than getting out of the house. Breathe in the fresh air. Work up an appetite, and try these scrumptious dishes in your own backyard.


For the shrimp and garlic:


For the grilled vegetables:

For the grilled shrimp and grilled vegetables: Drop the whole garlic cloves into boiling water, and boil for about 3 minutes. Drain, and set aside. Combine the olive oil, tomato sauce, vinegar, basil, garlic, salt, cayenne, black pepper and sugar in a large bowl, and stir to mix well. Add the shrimp, and toss to coat evenly. Cover, and refrigerate for 30 minutes.

Meanwhile, start the pasta and the lemon sauce: In a large bowl, whisk the oil, cheese, lemon juice and salt and pepper together. Bring a large pot of salted water to a boil. Cook the spaghetti according to package directions; you should drop the pasta around the time you put the shrimp and vegetables on the grill.

Remove the shrimp from the marinade, and reserve any of the marinade left in the bowl. Thread the shrimp and whole garlic cloves alternately on skewers. Thread the tomatoes onto skewers, as well. Toss the asparagus with olive oil, salt and pepper. Put the skewers and the asparagus on the grill (if you prefer, they can be arranged in a wire grill rack or basket). Grill the shrimp-and-garlic skewers, turning them several times and brushing them with the reserved marinade, for 6 to 8 minutes, or until the shrimp turn pink. Grill the tomato skewers for 6 minutes and the asparagus for 5 minutes, turning both frequently.

When the vegetables and shrimp are done, drain the pasta, reserving 1 cup of the cooking liquid. Add the spaghetti to the lemon sauce, and toss with the basil and lemon zest. Toss the pasta with enough reserved cooking liquid, 1/4 cup at a time, to moisten, and then add the shrimp, garlic and grilled vegetables. Season the pasta with more salt and pepper to taste. Transfer to bowls, and serve. Serves 4 to 6.

This dish is one I remember enjoying at Christian’s Restaurant in New Orleans before Hurricane Katrina came to town. The combination of local crabmeat and shrimp with eggplant and béchamel sauce is delicious! 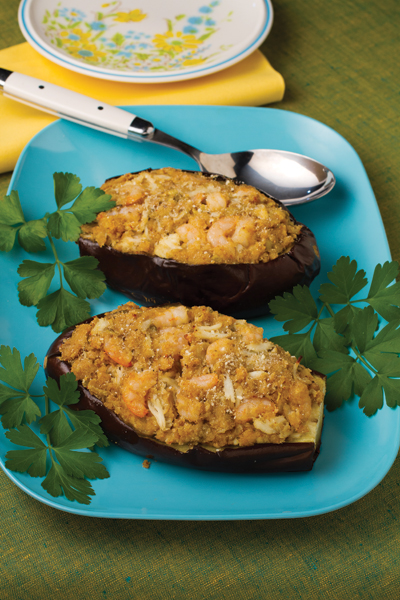 For the bechamel sauce:

Heat the butter in a medium-size saucepan over medium heat. Add the onions, and cook, stirring, until soft and golden, 6 to 8 minutes. Blend in the flour and milk, and season with salt. Cook, stirring, until the mixture is thick and smooth. Set aside.


For the stuffed eggplants:

Place the whole eggplants in a shallow pan, and bake at 350 degrees until soft, 45 minutes to 1 hour. Remove from the oven, and let cool. Cut off the stem ends. Cut each in half lengthwise, and carefully scoop out the pulp, leaving about 1/4 inch of the flesh with the shells. Chop the pulp finely, then measure out 2 cups of it.

Melt the butter in a large saucepan, and stir in the bread crumbs. Add the eggplant pulp, seasonings and the béchamel sauce. Mix well. Add the shrimp and crabmeat, and gently stir. Fill the eggplant shells with the mixture. Sprinkle generously with the Parmesan cheese.

Set the stuffed eggplants in a shallow baking pan, and bake at 375 degrees until hot, bubbly and lightly browned, 15 to 20 minutes. Serves 4.

My friend, the late Henry Mayer, showed me how to cook crabs on the grill, and man, are they fabulous! I recommend that you use rubber gloves when cleaning the crabs to protect your hands.

Put the crabs in the kitchen sink, and run very hot tap water over them. This will stun them so they can’t pinch. Pull the backs off the crabs, and clean out the dead man’s fingers (the gills), lungs and center of the crabs. Crack the claws, but do not remove the shells.

Sprinkle the crabs generously with salt and cayenne. Combine the butter, the seasoning mix, lemon juice, Worcestershire and paprika in a small saucepan or bowl. With a basting brush, brush about one-third of the sauce all over the crabs.

Place the crabs, cavity side down, on a medium to medium-low fire, and close the lid of the pit. Cook for about 10 minutes. Turn the crabs over, and fill the cavities with more of the butter sauce. Close the lid, and cook for 10 to 15 minutes. Cooking time will vary according to the heat of the fire and the size of the crabs. Brush the remaining butter sauce on the crabs, and serve immediately with hot French bread. Serves about 6.