The artistic vision, at its genesis, isn’t so much a vision for Lerin Freyou as it is a scent.
And sometimes, it stinks.

For those who live or frequent Calcasieu Parish regularly, it’s likely you’ve seen Freyou’s magnificent, unmistakable pieces around the area. A redfish on pallet boards. A street scene capsulized on an old front door, brass knob intact. Speckled trout swimming on the glass of an abandoned window pain.  They’re scattered about Sulphur and Lake Charles, hanging in a multitude of storefronts or office waiting rooms – pristine conversation starters, unique in their application, relatable in their message and beautiful by their completion.

Getting to that point, though, is a tad messy.

Freyou, like a lot of regional artists, leans heavily upon the crutch of local splendor when picking subject matter for her paintings. Where she separates herself from this crowded talent pool is the material she paints upon, and where she gets it – basically anywhere.

“I can only imagine what people are thinking right now: ‘Oh, my God! That’s so tacky!’ I hate to say it, but that’s what we do,” Freyou says. “We take stuff we find on the side of the road or stuck in the mud. I’m proud to say I’m always bringing home crap.
“My dad always said we were born with the scavenger gene,” Freyou continues. “It’s not like I’m making it an extreme sport or anything. But I’ll pick up stuff until I don’t have space anymore. One man’s trash can be my treasure.”

So Freyou rummages through flea markets, garage sales, recycling bins, places like that?

“Yeah, and I’ve been known to dumpster dive now and then,” Freyou says with a laugh. “You try and have a little pride about it, so you wait when there aren’t a lot of people around. But giving things a second life, it just brings out so much more character.”
She’s known as “The Fish Lady,” in art circles for the preponderance of fish that appear in her paintings. It’s a fitting moniker, Freyou says, one she takes pride in, just like the adventurous mediums she paints upon. Anyone can pretty-up a blank canvas, she reasons. White. Smooth. Even. Where’s the challenge in that? Try a dented garbage can lid, or plaster slabs, or misshapen slices of scrap metal. For Freyou, the “process” begins will before she lifts a brush. 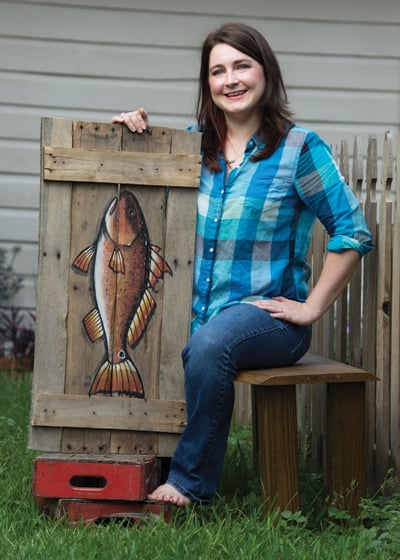 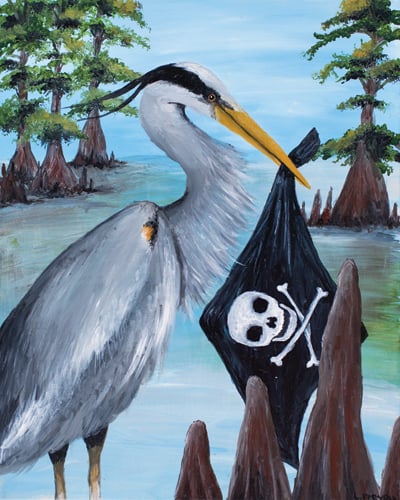 “There’s always been some creativeness flowing through my blood since I was born,” “My father was a construction worker, so building and assembling is a part of me. It’s a creative spirit. We didn’t have a whole lot growing up, so we were always trying to make normal things into more than what they were. A lot of refurbishing, sewing, crafts – making something old new again.
“I think people who grew up with that mindset appreciate that rustic feel, the mentality of being fortunate for what you got.”

Art – while always a part of her life – was never Freyou’s focus until recently. When she was younger, Freyou painted hearts, unicorns and whatever else young girls doodle onto miscellaneous items her father brought home from the job site. Her dream was to be a dietician, not a painter. Once Freyou had kids, she reconnected with art, setting up a Spartan art studio in the nursery. That’s where she spends her few unspoken for moments, playing with colors on different surfaces. In 2009, Freyou completed what she calls her first “real” piece – a redfish painted upon old pallet boards arranged to look like a shutter.

“It was always an outlet – a stress relief, nothing more,” she says. “But people kept commenting on it. ‘Hey, you should get this on a wall somewhere. It’s high-quality.’ And so I sold a couple pieces to local businesses, and it kind of just took off from there like, Wow, I guess you can make a little business out of something like this.’”

Part of Freyou’s appeal is the shared experiences both she and her audience share. Her paintings aren’t abstract. There’s no mystery in the subject matter, no puzzle to solve, no underlying message. It’s just snapshots of a typical childhood – weekend family trips to New Orleans, fishing on Bundicks Lake in DeRidder, begging your parents to keep a stray for a pet – captured on once-unwanted throw-away items.

“I was that squirmy little kid in the fishing boat not wanting to sit still,” Freyou says. “Your parents drag you out there – it’s a part of growing up. It’s a rite of passage down here. Everyone has a little-kid fishing memory. It seems terrible at the moment, but you looked back and it’s the best time ever. So that’s motivation to paint.

“There’s inspiration everywhere around here, so you don’t have to look far,” she continues. “You got swamps, animals, bayous, festivals. It doesn’t always have to be complicated. It can be as simple as painting stuff that I like to look at.”