Of Talent and Timing 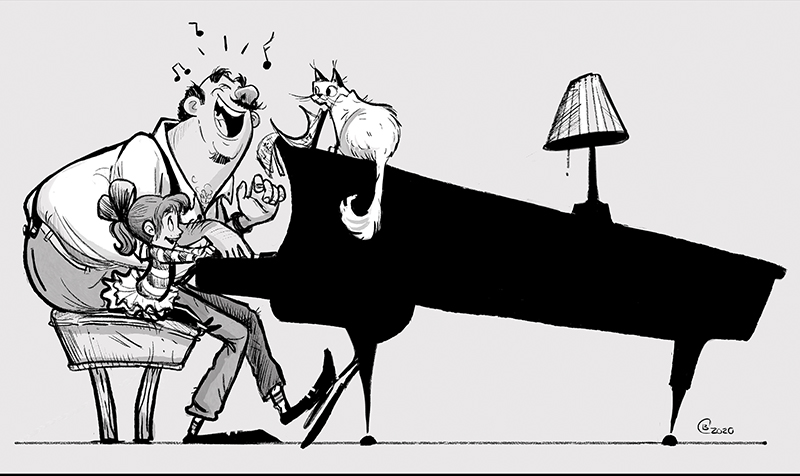 If someone asked what my last meal on earth would be, I’d choose Uncle Robert’s elaborate, multi-course Thanksgiving feast enlivened by his piano renditions of Broadway musicals. The darling of the Hebert family, “Rabbit” cooked like Joël Robuchon with the comedic verve of Will Ferrell. “Pass the authority” (a code for brandy) resounded at grandma’s long, lavish dinner table as he flamed the plum pudding amid applause and laughter; our tribe of 27 little Abbeville cousins enjoying pralines and crème brûlée tarts on the big screen porch.

In one of my earliest Thanksgiving memories, Uncle Robert taught me my very first piano melody, “The Sheik of Araby,” on his Model B “golden age” Steinway, which I later inherited.

My tiny hands would stretch out to reach the keys and Uncle Robert — balding, pleasantly plump and smelling of butter — would dive into lightning-fast runs and arpeggios, stopping to point out the note I should tap, just for fun. He was a slightly-mad-but-cuddly genius who loved an inside joke.

Several years later, as a teenage classical pianist performing Ravel’s Gaspard de la Nuit for a competition, I heard an unmistakable whistle from the audience. Beaming congratulations after the concert, Uncle Robert asked if I’d teach him how to read music. Naturally, I thought he was joking. But my hero couldn’t read a single note! He was a virtuoso pianist playing entirely by ear.

A child of Acadiana, I learned to believe in the curative powers of music, food and family. On chilly November mornings, when brisk winds blew across Bayou Vermilion and ducks were flying low in the marsh, the cotton-candy aroma of the Steen’s syrup mill spread throughout Abbeville, as my mother and her nine siblings prepared mirlitons, maque choux and meringues for Uncle Robert’s feast.

Enlisting little helpers for his 12-hour turkey and rice dressing, he regaled us with tales of our ancestors, Acadiana’s earliest settlers, who arrived from Quebec, Nova Scotia and Normandy from 1765 to 1780. They braved fires, established towns and erected churches including Abbeville’s St. Mary Magdalen, a neo-Gothic landmark built in 1911 by a beloved uncle, a literary priest from Quebec. Father LaForest donated the massive church bells that still ring out at noon.

These days, when I’m cooking wild duck gumbo during a cold front, I think of Uncle Robert’s stories, and how his extraordinary talents became tiles in the mosaic of my identity. Following his avocational trajectory, I performed with philharmonic orchestras, studied cooking in Paris and traveled the world. But I never found a taste adventure that rivaled those golden Thanksgiving afternoons in Abbeville.

For the first time in our family’s history, we won’t be celebrating the holidays together this year, courtesy of the pandemic. Instead, I sit at the Steinway playing Broadway musicals, and wonder if Uncle Robert is tilting his halo, and nodding in approval.

Lisa LeBlanc-Berry is an award-winning independent journalist, author and concert pianist with homes in New Orleans and Abbeville. Prior to her 10 years as a restaurant critic, 15 years as a food editor and 7 years as an interior design editor she spent 4 years with the symphony, earned degrees in music and a Grand Diplôme from Le Cordon Bleu, Paris. Her daily obsessions include jazz piano and dancing to music by Post Malone.