People travel to New Orleans from all over the globe; fortunately for residents of Acadiana, it’s a relatively quick (and picturesque) road trip. What follows is a tentative itinerary for a weekend jaunt to the Crescent City. Readers, be aware that part of the excitement of New Orleans comes from its spontaneity. 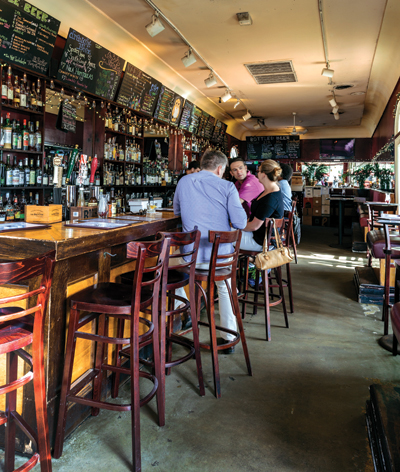 Sophisticated yet unpretentious, The Delachaise is a dimly lit, cozy wine bar with a romantic ambience. With an extensive wine list and other libations, it also serves elevated bar fare, including goose-fat french fries, a huge selection of cheeses, seasonal snacks, entrees and dessert. Sit outside on a balmy evening as the iconic streetcars rumble past you on St. Charles Avenue.

The Delachaise is primarily a wine bar, but its food, intimate atmosphere and location along the historic St. Charles Avenue make it a prime destination for visitors. 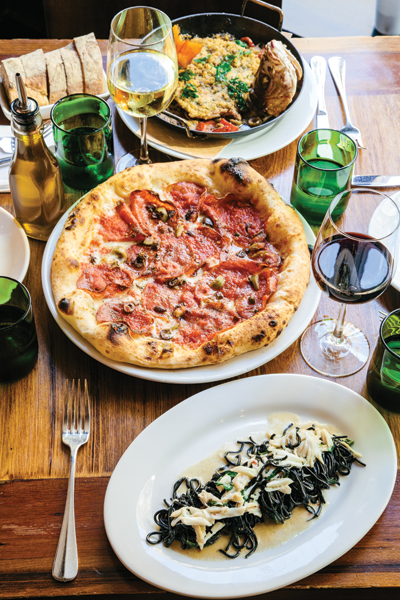 Bring your hearty appetite to dinner at Domenica, a sleek, stylish Italian restaurant (owned by the Besh Restaurant Group) inside the elegant Roosevelt Hotel. Executive chef Alon Shaya’s Neoapolitan-style pizzas (baked in a wood-burning oven) have garnered him numerous local and national awards, including the prestigious James Beard Award. Aside from the pizzas, there are a number of fresh pastas, seafood dishes, and innovative appetizers, including crispy fried kale. The restaurant’s popularity led to the opening of a spinoff Uptown, Pizza Domenica, which is smaller and more casual.

APPETIZER
The best appetizers might be a tie between the roasted cauliflower, with sea salt and comes with creamy whipped feta;  and the fried Tuscan kale, drizzled with pine nuts, tomatoes and Parmigiana Reggiano.

ENTREE
Get a few entrees and share. Pizzas, fresh pastas and seafood dishes cooked to perfection are just a few mouth-watering options.

Sights to See
After dinner, stroll through the nearby French Quarter, the oldest neighborhood in the city and home to hundreds of bars and tourist attractions. Whether you choose to party on Bourbon Street at night or meander through the quieter, more residential Lower French Quarter, it’s a must-see for all visitors. Most of the buildings were built in the late 1700s, and you’ll feel transplanted to a bygone era while walking around and soaking it in. Beyond the French Quarter is the Faubourg Marigny neighborhood, where you’ll find Frenchmen Street, lined music clubs and eateries. With a more bohemian flair than that tourist-packed Bourbon Street, Frenchmen Street is a favorite hangout among locals and visitors alike.

SPOTTED CAT
One great spot to catch live music is The Spotted Cat Music Club (spottedcatmusicclub.com) which doesn’t look like much from the outside. It’s a tiny, one-room music joint but what it lacks in size it makes up for in sound. It hosts a variety of musicians daily – shows generally take place at 4 p.m., 6 p.m. and 10 p.m. On Friday night, a real standout is the Cottonmouth Kings, who perform jazz, swing and traditional New Orleans jazz, often accompanied by swing dancers.

BAR TONIQUE
If you’re not tired from dancing and want to keep going, head over to Rampart Street and grab a nightcap at Bar Tonique, known for its hand-crafted cocktails. It’s in a historic building with exposed brick walls and a laid-back, intimate atmosphere. 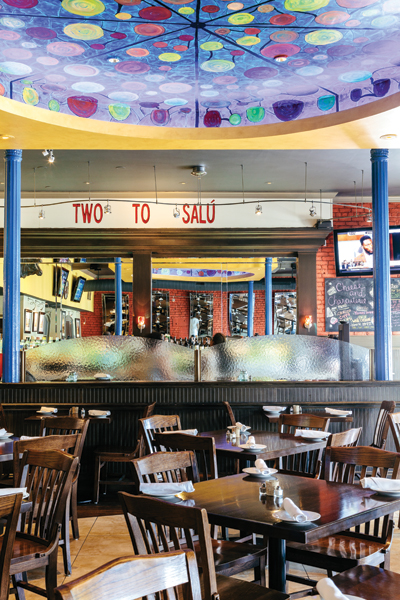 Associate editor of Acadiana Profile, Melanie Warner Spencer, swears that brunch at Salú on Magazine Street is one of the best deals town, due to its $15 bottomless cocktail offerings (including mimosas and Pimm’s cups) and its $8 Bloody Mary bar which features a zesty homemade mix. (And if you’re following this itinerary as a loose guide, you might need some hair of the dog after Friday night.) While this place is normally known as a wine and small plates bar, its “Boozy Brunch” on weekends exudes a festive atmosphere and lasts from 11:30 a.m. until 3 p.m., offering a number of breakfast sandwiches, omelets, Benedicts and flatbreads.

TO EAT
Try the Crab Cakes Benedict for a hearty brunch option.  For lighter fare you can always order one of their many salads or a soup of the day.

TO DRINK
The $15 bottomless cocktail offerings include Pimm’s cups, screwdrivers and mimosas. You can also opt for wine, beer or another cocktail.

After brunch, meander down Magazine Street in either direction to check out boutiques, restaurants (it’s never too early to plan for your next meal), coffee shops and galleries. If you head further Uptown on Magazine Street, eventually you’ll hit Audubon Park and the Audubon Zoo, a world-class attraction with an African savannah exhibit; the Asian Domain (with sun bears, elephants and a rare white tiger); an aviary with exotic birds; a sea lion exhibit; a swamp exhibit and much more.

Meanwhile, on the nearby Freret Street, you’ll find a bustling landscape dotted with shops, restaurants, bars, coffee shops and live entertainment venues. The area experienced a major renaissance over the past decade and is now a popular destination for all ages, including college students from the nearby Tulane and Loyola universities and yuppies in search of a good craft cocktail at Cure.Gasa Gasa livens up the scene even more. An intimate concert space with a full bar that this joint attracts a range of local, independent artists and national acts.  It’s also part “folk museum” – as it hosts film screenings, art exhibitions. Make sure you check out the murals outside, too. 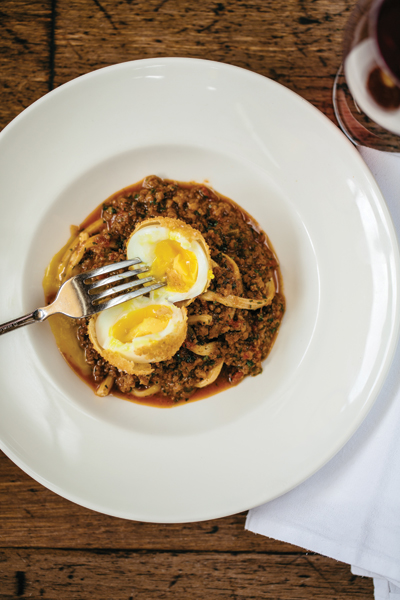 La Petite Grocery is helmed by Chef Justin Devillier, who serves French cuisine with a creative Southern twist. Think fine dining blended with comfort food, using local Louisiana ingredients. He’s been a finalist for the James Beard Award four years in a row, and his successes have garnered him much local and international praise. The atmosphere at La Petite Grocery is airy, with lots of natural light streaming in, and its Magazine Street location is charming and lively. You will definitely leave more than satisfied and with something to tell your friends back home about.

NEW MOVEMENT THEATER
The New Movement Theater (newmovementtheater.com) on St. Claude Avenue hosts “The Megaphone Show,” which features a well-known local telling three stories, inspiring improvisers to work their magic. Another act is rude. (www.rudestever.com) a witty multi-media sketch duo that performs on the first Saturday of every month at the New Movement.

The  STREETCARS  of New Orleans travel two routes: Canal Street, which goes from the French Quarter to the cemeteries that border City Park Avenue in Mid-City; and the St. Charles line, which runs from Carrollton Avenue and brings you up and down St. Charles Avenue.

Another option for transportation is  UBER,  which provides you with a personal driver who is summoned via a smartphone app. The driving service is similar in price point to a cab ride but much more reliable and timely; plus you can track your driver’s whereabouts on the GPS.

Another option is to rent a  scooter from a place like Eagle Rider of New Orleans – thought we don’t suggest this if you are imbibing. It’s a fun, efficient way to get around the city and parking is much easier in high-traffic areas. Plus the company frequently has deals available on Groupon. 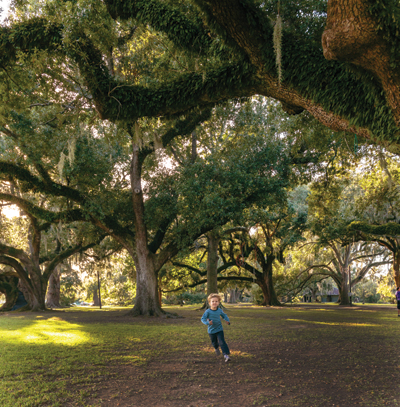 No trip to New Orleans is complete without a beignet, or three. These delightful deep-fried pastries are smothered in powdered sugar and go great with coffee, hot or iced. There’s the storied, tourist-filled Cafe du Monde in the French Quarter overlooking the Mississippi River, or you can head over to City Park, where the Morning Call coffee stand is a local favorite. Grab a bite, dust the sugar off your shirt and then explore the park itself, which is one of the biggest urban parks in the U.S. Attractions include a lagoon, a small lake, and majestic oak trees and greenery—plus, it is also home to the New Orleans Museum of Art; a sculpture garden; an amusement park; and City Putt, a mini-golf course. Throughout the year, it also hosts free concerts, movie screenings, and other community events.

City Park is known for its natural beauty and particularly for its magestic oak trees, some of which are between 600 and 900 years old. 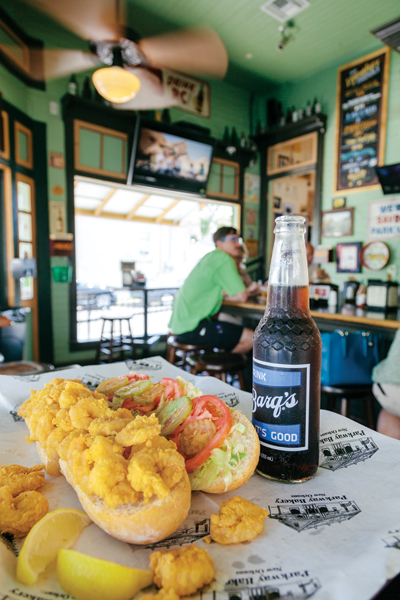 For lunch, stop by the nearby Parkway Bakery, the easygoing, laid-back sandwich spot along Bayou St. John that looks like it hasn’t changed in half a decade (it was renovated following Hurricane Katrina, but maintained its down-home, friendly atmosphere). Known for its signature poor boy sandwiches and cold beer, the place is an inviting, classic New Orleans spot that’s favored among neighborhood residents and tourists from all over – President Obama even ate there a few years ago on a visit.

Both Morning Call inside City Park and Parkway Bakery and Poor Boys (pictured) in the Bayou St. John neighborhood are nostalgic places that continue to serve New Orleans classics, like cafe au lait and fried shrimp poor boys washed down with a cold Barq’s root beer.

Sights to See
Kayak rentals are available on Bayou St. John if you’re interested in one last hurrah before you hit the road. Visit kayakitiyat.com for more information.

A MAJOR MUSIC FESTIVAL
Voodoo Music Experience (worshipthemusic.com) one of the city’s largest music festivals, takes place Oct. 30-Nov. 1 in City Park, which provides a picturesque, eerie backdrop for the hundreds of live acts that grace the stages.  Headliners this year include Florence+The Machine, Modest Mouse, Ozzy Osbourne fea. Geezer Butler, Jane’s Addiction, the Zac Brown Band, and the Cult – not to mention all the local acts.

A HALLOWEEN PARADE
On Oct. 24 check out the Krewe of Boo (kreweofboo.com) parade, with eye-popping, spooky floats, costumed revelers and masked mad men running amok through the French Quarter.