Bull riding has been called “the toughest eight seconds in sports.” When a cowboy settles into the bucking chute, wraps his hand in the bull rope and nods to open the gate, he knows he’s putting his life on the line when that mass of coiled muscle explodes into the arena. We’re talking about a 2,000-pound, raging, twisting, bucking beast whose sole purpose in life is to toss his rider straight over the cowboy moon.

At 5 feet, 5 inches tall and 130 pounds, Josh Barentine hardly looks like a match for this kind of raw power. Nonetheless, the 27-year-old Johnson Bayou native showed he had the right stuff when he captured the 2012 Championship Bull Riding (CBR) World Champion title, despite personal tragedy that sidelined him for several years.

Barentine rode his first bull – a little, 120-pound bald-faced calf his uncle goaded him into jumping on – when he was in kindergarten. From that day on, he knew he wanted to ride bulls and be a cowboy. He grew up wiry and athletic, as lithe as a cat astride horse or bull, and an accomplished bull rider all through high school. But when Hurricane Rita destroyed his family’s marginal ranching operation at Johnson Bayou in 2005, he suddenly found himself destitute and aimless. 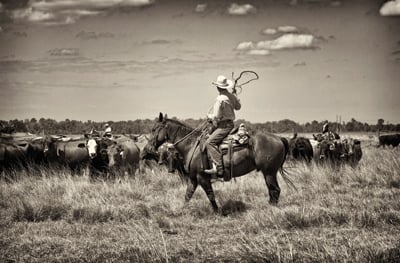 “We had 400 crossbred cattle, and Rita wiped out everything – houses, barns and all but 28 head of cows,” Barentine says. His slow drawl and solemn eyes reflect the pain of the memory. “Then three years later, after my dad rebuilt his house, Hurricane Ike came through and wiped it all out again. We never restocked the ranch.”

Johnson Bayou, like other small Gulf Coast towns in the southwestern corner of Louisiana, was devastated, dropping in population from around 2,000 to less than 500 after the storms. Barentine’s father, Ivan, luckily had taken another job offshore, but Josh drifted into depression, taking whatever odd jobs he could to survive.

“I had 56 of my own cows before the hurricanes, and that’s all I ever wanted to do,” he says. “I couldn’t ask my dad for help because he was scrounging just to get by and support my two little sisters. After the hurricanes I had nowhere to go. I felt like the world was ending and I’d never be a cowboy again.”

Barentine continued to flounder until the birth of his son, Kayson, four years ago. Gradually, he started putting his life back together, determined to follow his dream.
“Kayson and his mom, Jessica, put inspiration back in my life,” he says. “I wanted my son to know that I was a good cowboy and a good bull rider.”

Barentine has had several mentors along the way, including Kent LeDoux, manager of the huge Gray Ranch at Vinton, where he works when he’s not rodeoing.  LeDoux had enough faith in him to put him on part time as a cowboy, allowing him to take time off as needed to ride bulls.

“Knowing Josh’s background working cattle in the marshes and his ability as a cowboy, it was an easy fit for me,” LeDoux says. “I’ve always respected him as a quiet, hardworking young man, and I’m thrilled he’s available to help us when he can.”

Barentine has not let him down. From the start his routine has been: drive from DeQuincy, where he now lives, to the Gray Ranch every morning, go home in the evening, eat, work out at the gym until 9 p.m., and still fit in time to spend with his son. 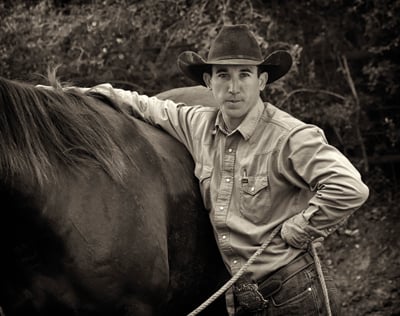 “When I got back into bull riding, I had to dedicate my life to it 100 percent,” he says. “It’s all mental. You have to make your mind up. I’m going to do this no matter what it takes.”
In just two years it paid off when he won the CBR World Championship and $200,000, more money than he’d ever seen in his life. Barentine credits another mentor with helping him get there, Don Gay, eight-time World Champion Bull Rider in the Professional Rodeo Cowboys Association, and manager of the Don Gay Professional Bull Riding Tour. Gay took a special interest in the young bull rider after seeing him compete.

“I could tell right away he had talent, but talent alone doesn’t assure you of making a living in rodeo,” Gay says. “He had all the tools necessary.He just needed a little guidance and confidence, and the only way to gain confidence in winning is by doing it. I may have helped some, but I don’t take credit for his success, because in the end he’s the one sticking his hand in the rope. I think he has the ability to be consistently in the top five for the world, and I’m real proud of him.”

When Gay called and asked Barentine to ride in his bull riding tour, it gave him the boost he needed. “I thought, if he thinks I’m good enough to compete professionally, I can do it,” Barentine says.

Bull riders aren’t known for having long careers, and it hasn’t been an easy road for the young athlete. Barentine started out the 2013 season by tearing an MCL when a bull slung him underneath him and stepped on his knee. It finally healed, and he was back on the road, but in June he drew a bull named Tomahawk, a big, rank bull with a fearsome reputation for injuring cowboys. The first jump out of the chute, he rolled out so hard he jerked Barentine off balance, smashing a horn into his face. Thinking he wasn’t hurt badly enough to go to the hospital, he continued to compete.

“I put some ice on it, ate some Tylenol and went on about my business,” he says. “Then about four weeks before the CBR finals, I kept getting bad headaches. I hadn’t been able to eat a steak since it happened.” 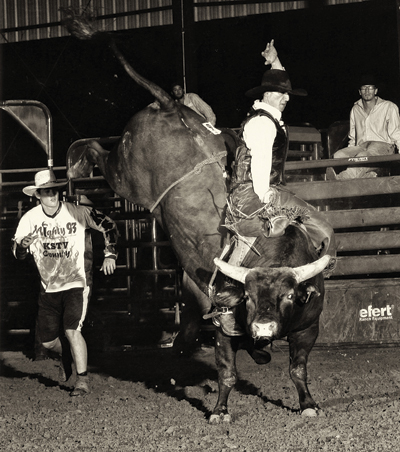 Finally he went to a doctor who told him he had a fractured jaw. That ended his chances for back-to-back championships, but in October he was back on the road with the 2014 season in his sights.

“You just have to treat it like a business, take it seriously from the ‘git-go’ and win some money, so when you do get hurt, you’ve got money in your pocket to pay your bills.”

Barentine knows exactly what he wants to do with his winnings. He’s already used some of it to start restocking the ranch at Johnson Bayou, build a new fence, buy horses for his ranch work, and of course, put some of it back into going for a second World Championship. As for the future, he figures, optimistically, he has another eight good years of bull riding.

“I like to shoot high,” he says, “but when I’m through riding bulls, I want to end up right here, working for the Gray Ranch and running my own cows.”