One of Papa’s favorite treats for the holidays was what he called tac-tac: popcorn balls. He often sent a request to Tante Belle, who lived next door to us when I was a youngster to make him a batch. She was an ace at making popcorn balls as well as caramel corn. In fact, she loved popping corn for any occasion. For my siblings’ and my birthday, she often made sugar corn. After the popcorn was popped, she drizzled sugar syrup tinted green, blue, red or pink (made so by the addition of food coloring) to make it festive.

Tac-tac was also popular at our local church fair held the first Sunday of December. The nuns spent hours making hundreds of the balls to see for a nickel apiece at one of the booths. Thinking about the church fair, which was called the Christmas Tree Fair, also brought to mind the divinity fudge one of my aunts made to sell at the fair. She tinted the sugary candy a bright green and poked a red cherry in the center of each square.

This particular aunt was the mother to 13 children, so there were always extra hands to help her with the candy-making. Back then, there were no electric mixers, so everyone took turns stirring the mixture until it reached a certain consistency. Later on, Papa gave Aunt Taye two electric mixers every Christmas because she burned them out making so much of her specialty.

In the spring, Papa’s fancy turned to sweet dough pies – tarte à la bouillie. He loved the regular custard ones the best. I preferred the ones filled with syrupy blackberries. In the small community of Catahoula, a few miles from St. Martinville, it was traditional for the ladies of the village to make hundreds of the pies to have on Good Friday and what became known as “pie day.”

Mrs. Tootie, a grand dame and a great storyteller, was of the opinion that since Catholics were allowed to eat only one meal on Good Friday, then why not eat pies well into the late evening without taking a break – one meal, right?

As Papa would say, “Oh, for the good old days!”

My sister Edna and I have dutifully reproduced Tante Belle’s popcorn balls and the caramel corn, but we just can’t seem to get it right with the sugar corn. We keep trying.
Perhaps you might want to introduce these delights to your family during the holidays.

In our October/November 2013 issue and on our website, we asked readers to submit their favorite “lost recipes.” Included in this section are three winning recipes that the staff has selected from the following readers: Adam Barrilleaux, who shares his grandfather’s porkchops, cabbage and rice dish; Shirley Manuel Johnson, who shares her 100-year-old recipe for catfish courtbouillion; and Paul Rockwell, who shares his mother’s cornbread recipe. All three of these readers received a $100 gift certificate to Jolie’s Louisiana Bistro in Lafayette. 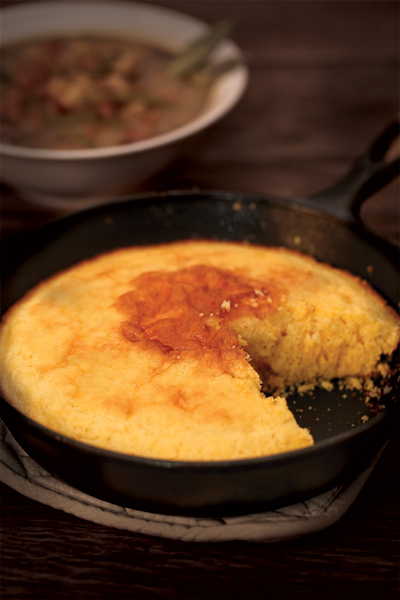 Mix all ingredients in a bowl.
Grease preheated 10-inch cast iron skillet.
Pour mixture into skillet.
Cook uncovered at 375 degrees for 30-45 minutes (until browned on top and sides).

Combine the popped corn, peanuts, and pecans in a large roasting pan.
Melt the butter in a large saucepan and stir in the sugars, salt and corn syrup.
Bring to a boil for five minutes, stirring often (temperature should be about 244 degrees).
Remove from the heat and stir in the baking soda.
Pour sugar mixture over the popped corn and nuts, and stir well.
Bake at 250 degrees for 45 minutes, stirring every 15 minutes.
Remove from the oven and cool.
Store in airtight containers.

Season the pork with salt and cayenne pepper, and put in refrigerator for 3-4 hours. Completely brown pork in canola oil. Remove the pork and add onions, bell pepper, celery and garlic to the grease. Cook vegetables until clear on low heat. Add cut cabbage and sauté for about 20 minutes, covered. Stir frequently on low heat. Add the rice, stock and pork to the pot. Stir and cook covered until rice is tender. Uncover and cook off any additional liquid. Add additional salt and cayenne to taste. 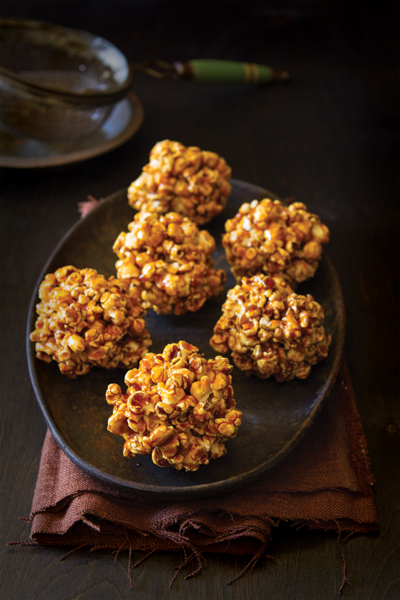 Heat the mixture and stir to dissolve the sugar. Stir constantly while cooking.
Do not leave it alone, because you need to push it until it reaches the thread stage, or until it reaches the temperature of 270 to 290 degrees.
It will be the color of taffy and thick.
Have a cup of cool water nearby. When a drop is added to the cup of water, it will crackle.
Carefully pour it onto the popped corn. With a long-handled spoon, stir to coat evenly.
Once it’s coated evenly and cooled a bit, break off and form into balls about the size of a soft baseball (or as big or little as you want).
Place on a layer of waxed paper to cool. When cooled completely, wrap in waxed paper.

Add minced garlic, Cajun seasoning, and 5 cups of water.
Bring to a boil, gently and carefully stir bottom to keep from sticking.
Note: Use a wooden utensil to stir with a flat edge, such as a roux stick. You have to scrape the bottom (gently) to keep the roux from sticking and burning on the bottom. It takes a very delicate touch.
Cover pot tightly and simmer on low heat after bringing to a boil;  shake covered pot several times during cooking or stir gently.
Stir gently, as not to break up fish, but scrape bottom now and then as to not let scorch.
Cook for exactly 1 hour after bringing to a boil.
Check for seasoning. Add hot sauce or Worsestershire to taste, if desired.
Serve in bowls over rice. 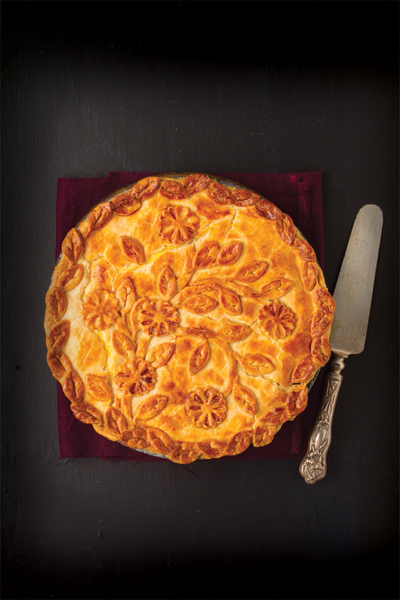 Makes 1 pie to serve 6
Again, this is one of those dishes that describes the type of cooking the Acadians developed. The ingredients are simple – milk, eggs, butter – all available on the farms where they lived. It is, and was, a cuisine of “making do” with what was at hand.
Tarte à la bouillie (loosely translated, this means a tart or pie filled with boiled custard) is a South Louisiana thing. Ask anybody over the age of 50 years old who lives in this area, and they will tell you, “Oh, yes, my grandmother and old aunts used to make them.”

Scald the quart of milk in a heavy Dutch oven. Set aside.
Beat the egg yolks until thick and lemon-colored at a low speed with an electric mixer.
Add 1 cup of the sugar and beat well.
Add the evaporated milk and 1 teaspoon of the vanilla, mixing well at low speed with the electric mixer.
Stir in ¾ cup of the flour.
Gradually stir in about ¼ of the hot milk into the egg mixture.
Add this mixture to the remaining hot milk, stirring constantly.
Cook over medium heat, stirring constantly, until thick and smooth, about 15 minutes.
Gently stir in 4 tablespoons of the butter and remove from the heat.
Set aside to cool completely.
Cream the softened 4 tablespoons butter, gradually adding 1 cup of the sugar, beating well.
Add 2 cups of the flour and the baking powder, beating at low speed with an electric mixer until the mixture resembles coarse meal.
Add ¼ cup milk and the remaining 1 teaspoon vanilla, stirring until well blended.
The dough will be crumbly at first but will form a smooth ball with continued mixing.
Turn the dough out, and knead 4 or 5 times.
Divide the dough in half.
Preheat the oven to 350 degrees.
Sprinkle the remaining 2 tablespoons of flour on waxed paper.
Press one portion of the dough into a 14-inch circle.
Carefully transfer the pastry (floured side down) to a buttered 9-inch deep-dish pie pan.
Fill the pastry shell with the custard, reserving 1 ¼ cups.
Place the remaining dough on waxed paper and press into an 11-inch circle.
Carefully place the pastry over the filling.
Do not slit top crust.
Seal and flute the edges.
Bake until lightly browned, about 35 minutes.
Remove the pie from the oven and let cool to room temperature.
Spoon the reserved custard into individual serving dishes, chill and serve at another time. 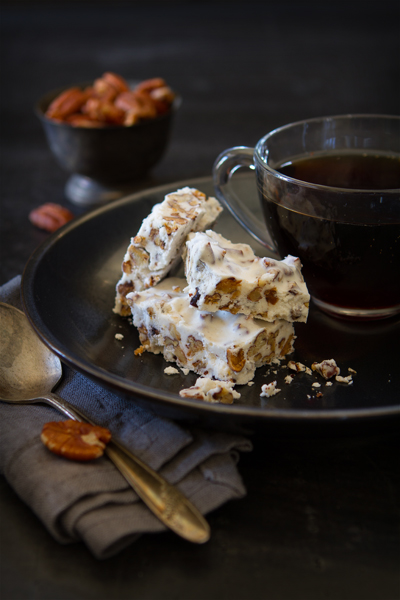 Makes 15 to 16 pieces
You should only attempt to make this candy on a cold, dry day.

Preheat the oven to 250 degrees. Grease an 8-by-12-inch glass dish with the butter. Set aside.
Arrange the pecan pieces evenly on a baking sheet.
Bake until brown and toasted, about 20 minutes.
Remove from the oven and set aside to cool.
Combine the sugar, corn syrup, and water in a heavy, deep saucepan over medium-low heat.
Stir until the sugar dissolves.
Continue stirring and cooking until the soft crack stage, or until it reaches the temperature of 270 to 290 on a candy thermometer and threads appear when the spoon is raised, about 20 minutes.
Beat the egg whites until stiff peaks form.
With the electric mixer on medium-high, slowly, slowly add the hot mixture to the egg whites, beating constantly until the mixture turns glossy.
Add the pecans and mix well, then pour into the prepared buttered pan.
Let sit until cooled completely. Cut into squares.

Many farmers in Louisiana raised peanuts in their home gardens because of its many uses and nutritional value. They were boiled or roasted and used to make brittle for the holidays.
My father loved peanut brittle, and I made it often for him when I was a young girl. We made this brittle simply because we had all the ingredients available on the farm. I continue to make this to give as gifts and to have for the family.
It can be stored in an airtight container for several days.

Combine the sugar and syrup in a heavy saucepan on medium heat.
Bring to a boil and cook until the mixture registers 230 degrees on a candy thermometer.|
Add the peanuts.
Cook, stirring constantly, until the mixture is a light brown color and registers 300 degrees on a candy thermometer.
Remove from the heat, add the baking soda and salt and quickly pour on a marble slab or a large sheet of parchment or waxed paper.
Spread as thin as you can. Cool, then break into pieces.