On the banks of the Bayou Teche, as the waves ripple around Charlie and Kay Sanders’ massive cypress tree on breezy autumn mornings, the New Iberia couple watches the yachts and party vessels passing their rear porch during boat parades. Some say theirs is the biggest cypress in the parish. The historic Weeks House that the Sanderses purchased and renovated in 2003, after 24 years of marriage, is situated on high ground that slopes down to the bayou. Their lush lawn is punctuated with commanding oaks with Spanish moss, where songbirds build their nests. Four of the grandest are registered with the Live Oaks Society.

The proprietor of S & S Renovators, Charlie won a national Chrysalis Award for Remodeling Excellence after beautifully updating the legendary Weeks House (listed on the National Register for Historic Places), which included resurrecting the original stairway that was found in hundreds of pieces in the attic. He restored the entire residence to its original splendor, adding modern amenities, a gazebo and a deck on the bayou. The Sanders’ antiques and objects d’art were collected during six years of road trips. 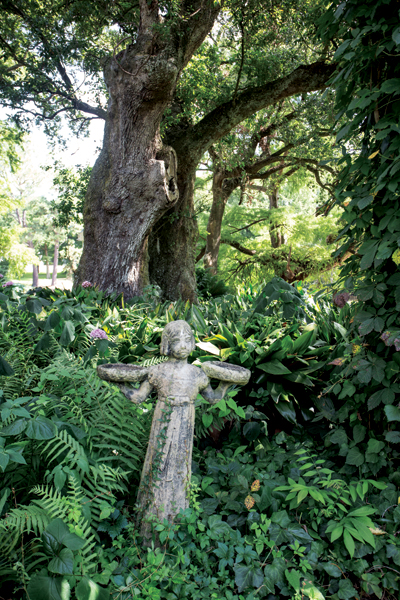 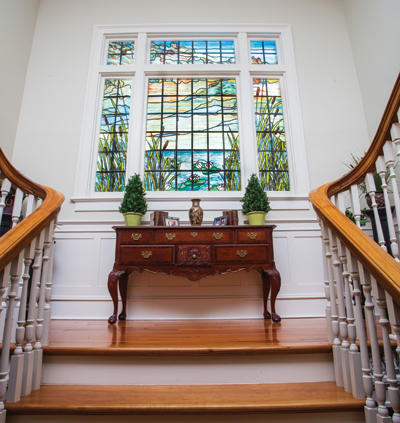 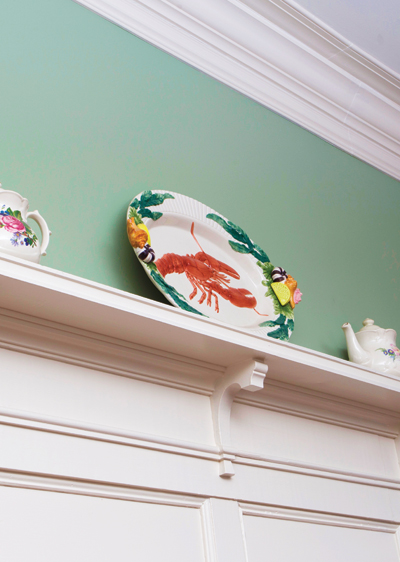 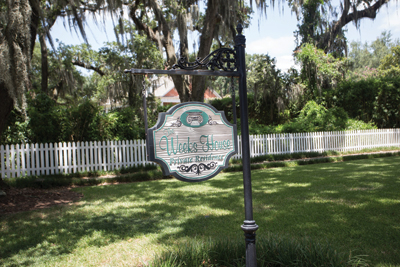 In 1952, former owner Elise Weeks bought out her co-heirs for $35,000 following her parents’ death, and set about remodeling the circa 1910 Weeks House to include apartments on the second floor. She never married. The grand staircase in the center hall was consequently removed, along with a large stained-glass window on the landing. Both were stored in the attic, collecting dust for the next 50 years. Elise’s sister, Mildred Dauterive, lived in the house for 25 years until her death; her son, Hank, became executor of the estate.

“He gave us all the original architectural drawings including all the receipts!” Charlie says. “We got rid of the two duplex kitchens on the second floor and brought back the stairway and stained-glass window found in pieces in the attic. It was like finding hidden treasure.”

Both homes are situated on the original tract of land that David and Mary Weeks purchased in 1825. The white-columned, 16-room Shadows, built by their slaves with handmade bricks and completed in 1834, was the third brick home in town.

Twenty-nine years after the Shadows’ completion, Federal troops would occupy the house and use it as their headquarters during the Civil War. Mary refused to leave the house, and remained with three house servants and her sister-in-law until she died in 1863 during the occupation. It is believed that her presence contributed to the property’s survival. 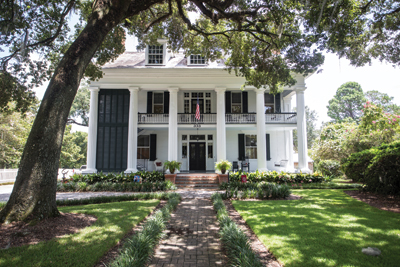 The two-and-a-half story residence, with five mature front lawn oaks, is solid cypress. It’s embellished with a distinguished Greek revival portico and six fluted Ionic columns, second-floor balconies and an attic rising to a 20-foot apex. Its sizeable basement was a rarity for New Iberia in 1910. 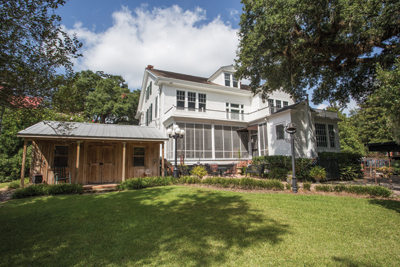 The property measures 398-feet deep, sloping down to Bayou Teche. Since New Iberia had no architects in the early 1900s, Edward Weeks hired a Boston architect, a Mr. Crosby, who came with his family to stay during the home’s five-month construction; he remained here permanently since he liked the town so much. When Elise Weeks assumed the house in 1952, she hired Baton Rouge architect Perry Brown, originally from New Iberia, for a renovation, which included removing the main stairway (stored in the attic) so as to convert the second floor into two apartments. 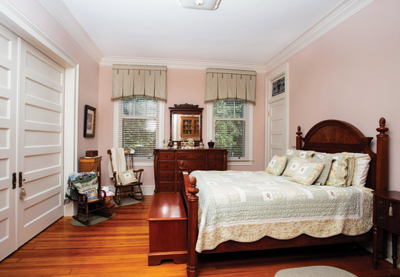 William Weeks Hall, the last family owner of the Shadows, was born on Halloween in 1894. His residency from 1922-1958 is heralded each year once October arrives, with activities building like a crescendo until Christmas. The Sanderses see school children gathering next door for ghost stories during Terror-on-the-Têche, as the legends of old souls are recounted under the harvest moon. Standing on their front porch in October and November, Charlie and Kay can take in the aromas and hear the live bands performing down Main Street for the festivals. Thousands gather during the annual World Championship Gumbo Cook-off the second week of October, when more than 90 teams compete.

“We have many visitors this time of the year,” says Charlie. “In November, we can hear the cannons going off next door.” The Shadows’ Nov. 7-8, 2015 Civil War Encampment marks the town’s final re-enactment of the Sesquicentennial Celebrations commemorating the 150th anniversary of the Civil War. “They have skirmishes representing both the Yankees and Rebs,” Charlie says.

Edward T. Weeks, David and Mary’s grandson, began construction of the sturdy white-columned Weeks House in 1908. With a Boston architect, he hired a local contractor, Thomas Monk, for a final cost of $12,000 total. As the house was being built, resilient New Iberia was rapidly changing. The first few automobiles were cruising in front of Edward’s house on unpaved Main Street, which was still bustling with buggies and carts, while a new 12-mile trolley line to Jeanerette was gathering steam. Sunday afternoons brought Wild West shows, new silent movies at the local opera house, and brass band concerts at the courthouse, which is the present-day Bouligny Plaza (where the annual Gumbo Cook-Off is now held).

“I always wanted to live in a large, historic house after seeing Gone with the Wind as a child. But I never dreamed I’d be lucky enough to find something as grand as this, and directly on the bayou,” Charlie reflects. “We are always hearing new stories. When people visited our house during the Christmas Parade of Homes a few years ago, we heard tales of refugees who stayed here for the big flood,” he says.

In 1927, the Weeks House was used for displaced survivors during the Great Flood, when 20 parishes went underwater and South Louisiana became a 200-mile lake. “It was kind of eerie, when the choir stated to sing in the house,” he recalls. “Some of the older people told us stories about when they used to play here as children.”

It is easy to recount bygone days in this splendid old house and imagine the Weeks children running across the lawn before the war, and young William, fresh from Paris, hosting his famous celebrity soirées. Edward’s father, Conrad Weeks, once jumped over the banisters of the second floor as a child, and some say he defeated an opponent in an 1833 duel. From wars to weddings, feasts, floods and famine, New Iberia’s Old South legends live on due to preservationists such as the Sanderses, who lovingly brought this time-honored treasure back to life.