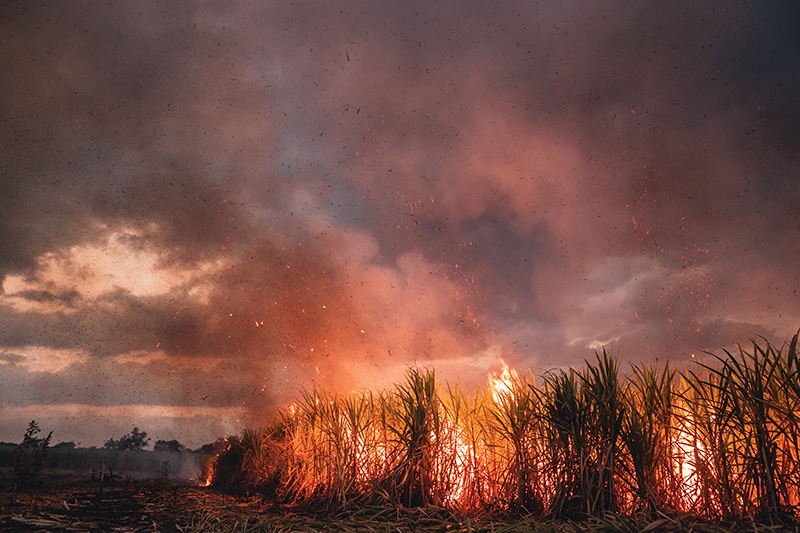 In Acadiana, fall brings its promise of mildness after summer heat and humidity so thick it feels like stepping into a sauna on your doorstep. Finally, the north wind dries and sweeps the sky, leaving a light blue background with some ruffled clouds. With the new tilt of the earth, the light arrives at a new angle and creates a “golden hour” that goes on forever. The invigorating colors and sensations accompany a scent unmatched elsewhere in the United States. When it is time for harvest, signaled by the endless parade of trucks laden with sugar cane freshly cut by huge machinery, the aroma of the debris burning in the harvested fields wafts through the air. While unpleasant to some, it is, in my opinion, the very scent of Louisiana.

The cultivation of sugar cane is so old that the first texts describing it are written in Sanskrit. Before arriving in northern India, it was first grown in two different places: in the archipelago of New Guinea and in the Southeast Asian peninsula that was once called Indochina. From there it spread across the Pacific Islands. It is believed to have contributed to the expansion of the Austronesian peoples through this area, as far as Hawaii. Interesting fact: Sugar cane belongs to the grass family.

Arrived here in 1765 by the Jesuit fathers who cultivated it for their own consumption, sugar cane did not take an important place in the economy until the invention of the granulation process by Étienne de Boré. Initially an indigo grower, de Boré became interested in sugar cane with the arrival of planters fleeing the Haitian revolution. These are the planters who imported the expertise, and the slave labor, and who developed the trade in “white gold”. Its production in Saint-Domingue brought in so much money for France that it was willing to let go of vast North American territories in order to keep its Caribbean sugar islands. It represented roughly half of the world’s production, harvested by hands without freedom. We cannot talk about the history of sugar cane without invoking the cruelty of slavery. The sweetness of sugar is put into perspective by the bitter heritage of the forced servitude of millions of Africans in the Americas. A merciless suffering endured by blacks in the name of white granulated delight.

Now, the sugar industry, with its harvesting machines that have long replaced the machete, brings in between $2 and $3 billion to the economy each year. On 400,000 acres in 22 parishes, roughly 13 million tons of raw sugar is produced in eleven factories, employing some 17,000 people.

Endless sugar cane fields. The pungent smell of smoke. White steam from the sugar mills along Highway 90 billowing into a blue sky. These are the elements of a living tableau of south Louisiana in the fall.