In the Spirit of Staycation

When acclaimed Lafayette architect Allen Bacqué was asked to update a modest home situated on several acres in St. Landry Parish, the project took on a life of its own.

“We were designing the house as we built it,” he says. “The couple wanted me to create a tropical retreat in the backyard at a beautiful property that slopes down from high ground on the Couteau Ridge to the woods. The plan was to tackle the back yard before re-doing the house. But as the design and construction moved along, we found out that the slab for the house was crooked; the foundation was substandard. So we had to tear the house down. The original house was a rather non-descript, little 1950s place with 8-foot ceilings.”

The total transformation during the tropically inspired metamorphosis resulted in the owners embracing new concepts, which included the construction of a stunning new 10,400-square-foot home with 14-foot ceilings and several outbuildings that emulate a five-star Caribbean resort. This included a new 1,040 square-foot guest house with an inviting screened porch and a 1,070 square-foot pool house with a covered porch known as the “party house,” plus a copper-roof tiki bar, complete with a full kitchen, ceiling fans, a flat screen and a gas grill. “They are very busy, and they don’t get much time off. So the idea was to create a true resort experience that the whole family, including their children and grandchildren, could enjoy,” Bacqué says.

The multi-million dollar project also included replacing the old pool with a far better one flanked by two hot tubs and a custom fire pit. Other additions included installing a cutting-edge audio-video system throughout the complex, two game rooms, a home gym, media room and a state-of-the-art home theatre.

“They have a six-foot-tall rack of equipment you could probably run a business out of,” Bacqué notes. “There are cameras all around the place. Each person in the house has their own TV box for their own channels. You can sit at your TV and have six views of the swimming pool. There’s a carousel that holds over 300 movies and it’s all linked to the Internet.

“The movie room has a giant high-definition monitor and sound system that will rock the nails out of the wall boards. They wanted it to be a true movie experience, and it is. It’s very sophisticated, from Audio Video Innovators in Lafayette. There’s a little bar area and nine gigantic leather recliner seats. Several of them are double so you can snuggle.” 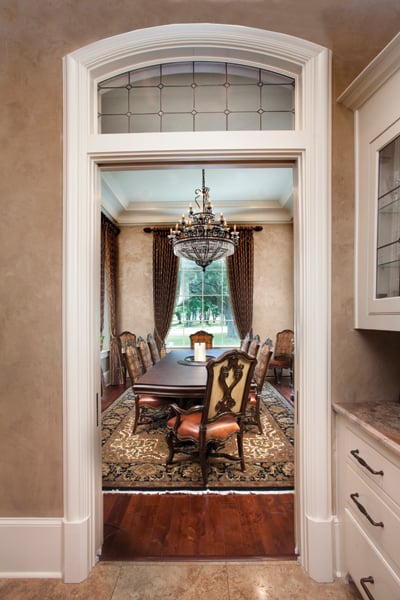 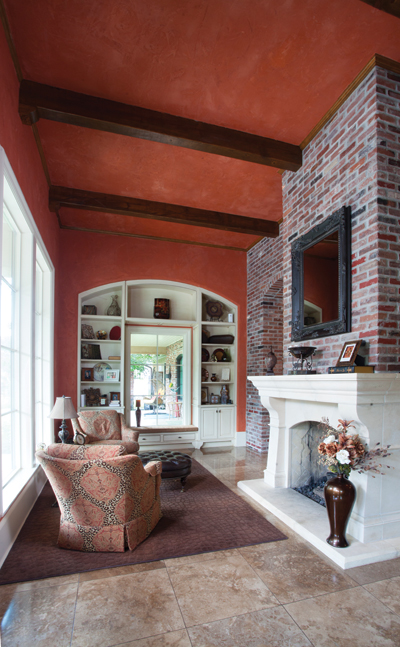 Left: A custom antique leaded glass transom frames the doorway from the butler’s pantry to the dining room in the main house, appointed with draperies by Window Impressions, a hand-knotted rug from Cyrus Oriental Rugs and décor from Albarado’s Fine Furnishings. Right: The airy sun room (the owner’s favorite place to relax) overlooks the pool and shares a two-sided fireplace with the living room.

Always on-call, the owners were seeking a reprieve from their continually busy daily routines, as well as the logistical toll of travel that involves gathering around the calendar to block out family vacation time with the new house and pool area they asked Bacqué to create for them.

“As the design and construction moved along, we built the party house and pool with all sandstone decks. When the land slopes down further, we used Ipe, an untreated Brazilian hardwood that lasts. We put it around as the deck for the tiki bar. It allowed us to work around an existing live oak tree.” Three times harder than cedar, Ipe has the same fire rating as concrete and steel.

“They came to me with only two pictures. Both were of the back of a house overlooking a swimming pool with a view of a house, with a bar right by the pool, that’s all they brought, nothing else. But these pictures look nothing like what we ended up building.”
Bacqué and his team, including Opelousas builder Easton Stelly of BoMac Builders, interior designer Michelle Dupree (Associate IIDA) of MSBS in Lafayette, Muller Lighting in Opelousas, sculptor Russell Whiting of Breaux Bridge, Whoojoo Glass, Evangeline Galleries, Window Impressions and Randy LeBlanc of Metal Head in Lafayette installed custom flourishes throughout including intricate moldings measuring 18 X 12-inches, stained glass transoms, fanciful railings and skylights that Bacqué designed.

A courtyard was created to feature an elaborate bronze fountain the owners purchased while traveling. It is located near the new two-story, three-car garage that contains a home gym with vaulted ceilings on the second floor. A stairwell leads from the main house to the second floor of the garage and plush home theatre. Bacqué designed the Art Deco wall sconces with wrought iron frames in the theater and installed a stained-glass side door with a Lord of the Rings window above. 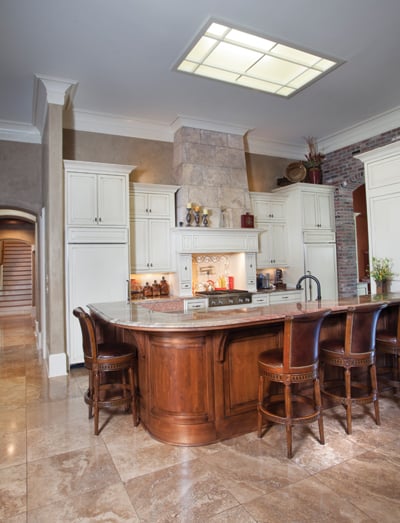 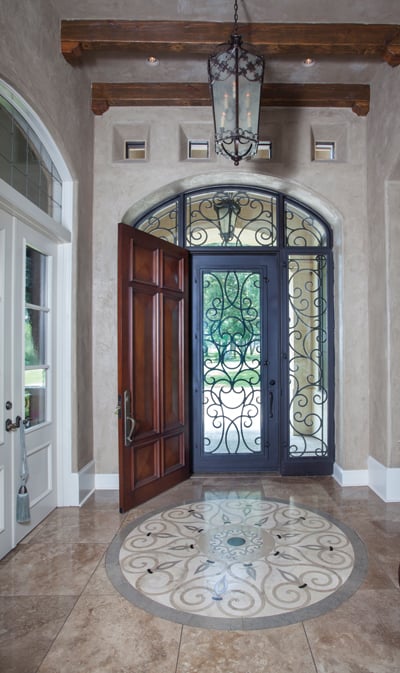 Left: Bacqué designed a skylight above the granite-topped kitchen peninsula, and installed warm lighting for evenings. “I always try to bring in natural light from three sides, but since the kitchen is located in the middle of the house, I brought in the third light element with a skylight.” Right: Bacqué created the filigree iron design for front door and transom, which was then fashioned by Metal Head.

Renowned sculptor Russell Whiting was commissioned to create a newel post to support the entrance stairway. “I was very impressed by how Russell carved a standing female figure out of a solid block of 8-foot by 12-foot iron. He carved it with a metal torch that carves with a curved flame. He’s probably the only person in the world who does this,” Bacqué says. “We took the unit he built over to Metal Head where Randy was working on the custom railing.”

“The owner wanted an LSU logo on the bottom of the pool,” says Dupree, so we accomplished this with mosaic tiles. “We had the contractor make a cover for the fire pit, so it can be used as a table when it’s not cold outside. Allen designed the beautiful iron and glass entry door and transoms. The owner really wanted a stunning entry, so we installed a medallion in the travertine floor.” The outdoor foyer features antique wooden beams and an intricate ceramic tile ceiling. “It has kind of a Central American feel to the entry,” Bacqué says.

“The idea was to create a home to fit they way they wanted to live, rather than follow any particular architectural style,” says Bacqué. “My favorite part of the house is that there are beautiful finishes everywhere. The main thing is that they love their house. Not much else matters to me when I design something. My job is to fulfill the owners’ wants and dreams to the best of my ability. I think I hit this one out of the park.” 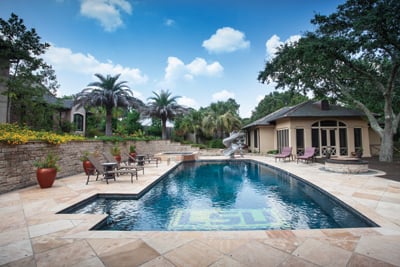 Because the owners are big fans, an LSU logo in mosaic tile was installed at the bottom of the pool. The backyard contains several outbuildings including a party/pool house and a two-bedroom guest house, sloping down to a tropical tiki bar with a flat-screen TV, full kitchen and gas grill. 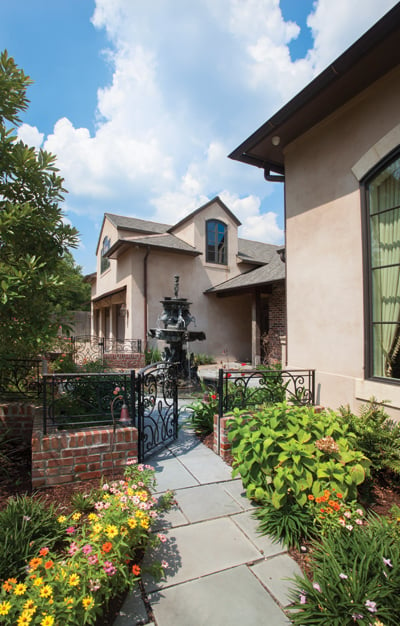 The courtyard features an intricate bronze fountain near a three-car garage with a home gym and theater on the second floor.