I’ve been having a sweet love affair with fresh herbs since my Tante Belle introduced me her crop of peppermint that grew profusely under the leaky faucet protruding from her screen porch. We would rub a few leaves on our lips to tickle our taste buds before we gathered handfuls to put in a pot with equal parts of sugar and water to make mint-flavored simple syrup. The syrup was used to make mint-flavored lemonade chilled with slivers of ice we hacked off a big block of ice that was stored in the ice box.

Tante May, who lived across the street, was fond of fresh parsley and always had a plot of it near the door to her kitchen. Nary a pot of gumbo or soup, or a plate of food, went unadorned by a few sprigs of the bright green herb.  She often put a few leaves in her mouth while she cooked, saying it rejuvenated her taste buds.
My aunt Grace grew lemon verbena primarily to make sachets to slip in between her bed linens, but she also made simple syrup with it to swizzle into her summertime gin and tonic.

These days, I usually have an abundance of several kinds of mint (try tucking chocolate mint leaves in a bowl of sliced strawberries), flat-leaf parsley, tarragon, Greek oregano, cilantro and dill. Planted in containers near my kitchen door, they are an inspiration when I’m piddling around in the kitchen. I also have a large wall pocket filled with several kinds of mint in my outdoor shower adjacent to my potting shed. The splashing of the water on the leaves sends out a heavenly scent! You might also think about planting a variety of herbs in window boxes or in small containers on the window sill in your kitchen.

Here are a few dishes that I’ve experimented with.  You’ll like the jolt the herbs give to fairly simple dishes.

Shrimp with Garlic and Rosemary

MAKES 4 TO 6 SERVINGS
1½ pounds large shrimp, peeled and deveined
1 teaspoon minced garlic
3 tablespoons extra-virgin olive oil
½ teaspoon salt
¼ teaspoon freshly ground black pepper
12 sprigs fresh rosemary
2 tablespoons unsalted butter
½ cup dry vermouth
In a large shallow bowl, combine the shrimp, garlic, olive oil, salt and pepper, and toss to coat evenly.
Lightly crush eight sprigs of the rosemary with your hands, add to the shrimp and toss again.
Cover and refrigerate for up to eight hours, tossing occasionally.
In a large heavy skillet, melt the butter over high heat.
Add the shrimp and the marinade, and cook, stirring, until the shrimp are pink, about two minutes.
Reduce the heat to medium, cover and cook for about three minutes.
With a slotted spoon, transfer the shrimp to a platter and discard the rosemary sprigs.
Pour the vermouth into the skillet and boil over high heat, stirring frequently until it reduces to a medium-thick glaze.
Return the shrimp to the pan and stir gently for about one minute.
Add the remaining rosemary sprigs and serve warm on toasted French bread, or toss with the pasta of your choice. 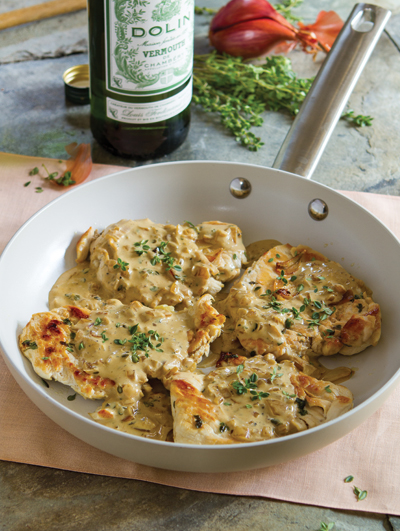 MAKES 6 SERVINGS
¼ cup plus 1 tablespoon olive oil
3 large garlic cloves, sliced lengthwise
15 small sprigs lemon thyme,
plus 1½ teaspoons minced lemon thyme
2 pounds skinless, boneless chicken halves
cut into 3-inch squares, pounded flat
3 shallots, minced
½ cup dry white wine or dry vermouth
¾ cup chicken broth
1½ teaspoons Dijon mustard
¼ teaspoon freshly ground black pepper
½ cup heavy cream
Salt to taste
Rub one tablespoon of the oil over the bottom of a nine-inch square baking dish.
Scatter one-third each of the garlic and the lemon thyme sprigs and top with half of the chicken.
Repeat the layering two more times, ending with a sprinkling of the remaining garlic and thyme sprigs.
Cover tightly with plastic wrap and refrigerate for at least eight hours.
In a large skillet, heat the remaining two tablespoons of the oil over medium-high heat.
Add the shallots and the minced lemon thyme and cook, stirring, until golden, about two minutes.
With a slotted spoon, transfer the herbed shallots to a small plate.
Increase the heat to high, add the chicken in batches and cook, turning until browned, about one minute per side.
Transfer to a plate as they are cooked.
Add the wine to the skillet and bring to a boil, scrapping up any browned bits from the bottom of the pan.
Boil until the wine reduces to a rich amber glaze, two to three minutes.
Return the shallots to the skillet, add the chicken broth and blend in the mustard and pepper. Boil, stirring constantly, until the sauce reduces by two-thirds, three to four minutes. Stir in the cream and season with salt to taste.
Reduce the heat to low, return the chicken to the pan and warm through, spooning the sauce over the chicken and serve hot.
During the summer months, make compound butter to store in the freezer. Put a generous pat of the butter on sizzling steaks, burgers, fish or chicken breasts when they come off the grill.

2 sticks butter, at room temperature
1 teaspoon each finely chopped fresh parsley
leaves, dill, oregano and rosemary
Freshly ground black pepper to taste
Beat the butter until creamy.
Add the herbs and beat again.
Roll into cylinders and cover with plastic wrap, or spoon the mixture into crocks, small ramekins or jars.
Cover with plastic wrap and refrigerate, or freeze.