From Ashes to Architecture

Take a walk through the Charpentier Historic District of Calcasieu Parish in Lake Charles, and you might notice something a bit unusual. Unlike in some historic neighborhoods found around the United States, the houses here don’t necessarily have uniform fencing or the same kind of vegetation. They aren’t all the same size or height. The houses aren’t all the same color.

In Lake Charles, it isn’t any sort of unity that makes the historic district unusual but rather a shared past that has resulted in a neighborhood featuring an eclectic collection of Victorian-style buildings, each with a distinct story and unique look. Massive columns are combined with wood-crafted ornamentation. Turrets are decorated with stained-glass windows. Intricate balustrades, scrolls and spindles detail expansive porches.

Originally a lumber town with 28 sawmills, Lake Charles was a place made out of wood. The term “Victorian” is used to represent many styles of architecture that evolved in England and the United States from around 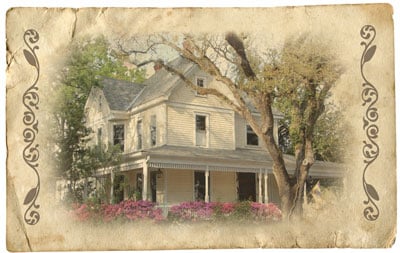 1840 to the early 1900s, but the city’s unique position as a lumber town resulted in immediate access to unusual tools, putting an uncommon spin on a common form of architecture. “When you come to Lake Charles, you’ll see Victorian architecture that has some distinctive Lake Charles features,” says Adley Cormier, long-standing advocacy chair of the Calcasieu Historic Preservation Society, which helps identify and document historic structures in the area and assists homeowners and property owners in maintaining these buildings.

With more than 40 blocks and hundreds of mixed-style buildings, the Charpentier District has been listed on the National Register of Historic Places. Many of the houses along Broad, Kirby and Pujo streets showcase the particular products, styles and designs of the mill owners who owned these homes, many of which were made of Louisiana cypress and hard pine. “They served as visual catalogs,” Cormier says, “and because of that, there’s an enormous variety of what we call kickshaws, which are little doodads … that hang off those Victorian houses we have here that are specifically designed in Lake Charles and were products of the Lake Charles mills.” 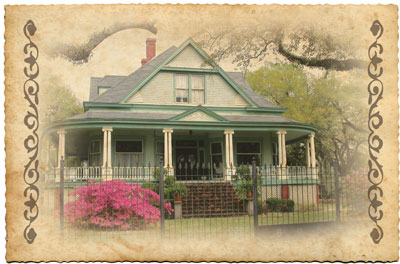 A combination of French, Spanish and German influences as well as transplants from the Upland South also created an unusual form of architecture and design. “We have a good variety of structures that make it a little less homogenous than other places,” Cormier says. “We have variations of size and shape and style.”

Because of its history as a lumber town, many distinctive architectural features were born in Lake Charles, including a particular siding design known locally as German siding, which was created from the Louisiana cypress tree. The Lake Charles column first appeared after the turn of the 20th century when these two-story, slightly tapered columns made out of a single board came into use, and there are several great examples of the feature today. “This is essentially the sawmill version of the Greek revival column,” Cormier says. 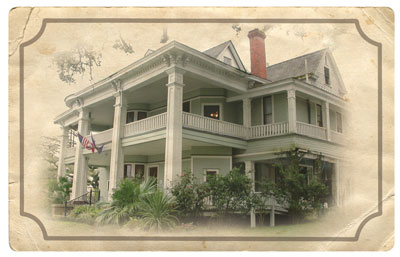 “Columns, bracketry, dormers, roof styles, porches, windows – you could put whatever your heart wanted on your home,” says A.C. Bourdier, a historian for the Calcasieu Historical Preservation Society. “Some have three columns; some have five columns; some have two columns. We have a Victorian that has seven different architectural styles on it alone.” This particular house, built in 1900, is on the corner of Mill and Ford, has a yard about half a city block long and is beautifully painted, Bourdier says. “It’s the finest Victorian we have in town.” 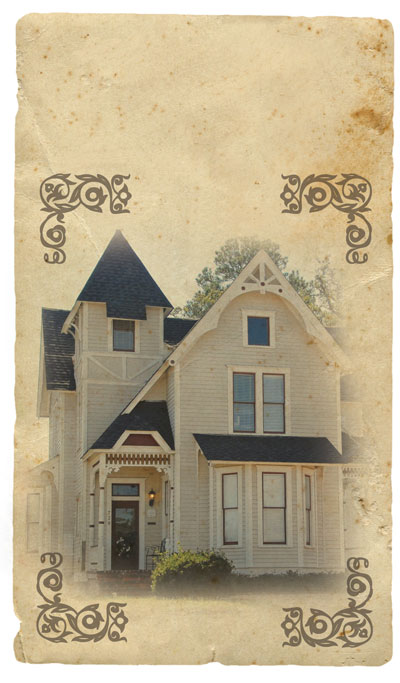 Another home that Bourdier finds particularly attractive is a large two-story colonial building that was built in 1904 or 1905 and had many owners before being left vacant for several years. It was then bought by an attorney who did an excellent job in restoring it. “I always point it out to all the people I take on tour because it’s the epitome of Lake Charles colonial architecture,” he says. It has a grooved ceiling on the porch painted blue and the famous Lake Charles columns.

Although the buildings themselves are the primary draw to the historic district, the people who have lived and worked here also left a legacy. “You can’t have a tour without ghosts,” Bourdier says. The first anesthesiologist in Lake Charles (who also conducted one of the first dairy inspections) lived in a house on the corner of Kirby and Reid streets – and he may still live there today in ghost form. A house on Mill Street is said to be haunted by a man who rocks in a chair on the porch. Up the block is a house that served as a stand-in prison when the city jail burnt down in 1910. Prisoners were put on the third level of the home, and conflicting stories say that one of these men either jumped out of the window in hopes of landing in a nearby oak tree but missed or was thrown out of the window after a fight broke out among some of the men. In any case, his ghost is said to still haunt the property.

Owning a home in the historic district of Lake Charles requires a lot of effort and financial investment on the part of the homeowners. Wet weather conditions can cause havoc on these buildings, so the exterior should be regularly painted. In addition, three types of termites 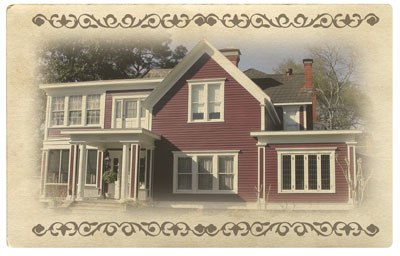 can be problematic, but many houses were originally built with superior wood that is more resistant to the pests, so protecting and preserving this wood has a structural purpose as well as an aesthetic one. “We also encourage that the façades of the house – the public areas that are shared with the street – try to remain as authentic as possible,” Cormier says. Archives that contain documented photographs of the homes from their early years provide information on what the homes originally looked like. Interior changes are left to homeowners, he says, “but we want people to think of the exterior of their homes as a shared resource for the entire community and that they’re essentially the caretakers for the house rather than the owners.”

“We want streetscapes to remain intact so that they’re leafy and cozy and family-oriented,” Bourdier says. “We want the look of Lake Charles in 1900.” That said, the neighborhood is now much more colorful than it was at the turn of the 20th century. “In the early 1900s there was a trend in painting homes white,” he says. “This was a white town. All the buildings and all the houses were white – and then one lady who had a little two-story painted it a tangerine color with cream trim. Shock of all shocks, it took off like wildfire.” Color was soon in vogue, and today the streets are a rainbow of hues. At one point in time, one house had eight different colors on it (each shingle was individually painted) ranging from cream to dark purple with some blues. 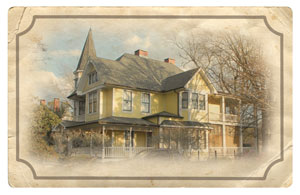 Those who live in this part of downtown are, for the most part, proud of their neighborhood. When someone wants to buy a home in the area, they’re told of the regulations and restrictions of maintaining the architectural integrity of the property. In Margaret Place (slightly southwest of downtown) in particular, homeowners are very protective of their neighborhood. “The neighbors will come over and say, ‘You can’t do that; it doesn’t look right,’” Bourdier says.

Architecture in the downtown area specifically was greatly influenced by a massive fire that swept through on the afternoon of Saturday, April 23, 1910. The blaze began behind the unoccupied opera house, Gunn’s Bookstore and a soft drink stand and then quickly spread to the Catholic church and courthouse. When it was finally contained four hours later, many downtown Lake Charles businesses and buildings had been destroyed along with several homes. In all, the fire destroyed 109 buildings. The city wasted no time in rebuilding what had been lost, but it did so in a way that attempted to preserve the integrity of what Lake Charles once was; however, it’s also obvious that several of the buildings were designed by pattern book design, which means they have the same basic structure combined with personal touches.

As a result of Lake Charles’ fiery history, visitors today have a fascinating smorgasbord of architecturally quirky buildings (many of which just turned 100 years old) that mirrors what once stood in and near downtown, as 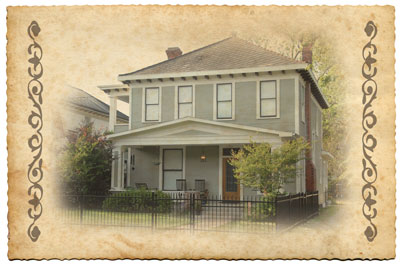 well as original architecture found immediately beyond the affected areas. During the annual Palm Sunday Tour of Homes, organized walking tours, special exhibits and interior tours offer a rare, in-depth glimpse at homes that defined this period of history. Over the holiday season, many of the homes are beautifully decorated with lights, and occasionally guided tours are made available in order to enjoy the festive façades.

However, the most common and flexible way to explore the historic district of Calcasieu Parish is by taking a self-guided walking tour. The Southwest Louisiana Convention & Visitors Bureau publishes a hearty brochure outlining noteworthy buildings in the Charpentier District (which includes the downtown area), as well as Margaret Place, Shell Beach Drive and outside of town in nearby Sulphur. In order to have a building listed in this brochure, homeowners must research their living quarters and understand the history behind them. Those homes ultimately chosen for inclusion look particularly interesting and have unique stories: They once housed someone significant in local history, were important in a trend movement in some way or have some other feature that sets them apart from others in the neighborhood. “It’s not just the architecture that sets them apart,” Cormier says, “but also the association with other activities and individuals.” 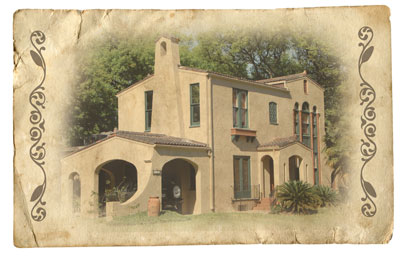 Public buildings on the walking tour have well-documented stories that make them significant in Lake Charles’ history. A New Orleans architectural firm, Favrot and Livaudais, practiced historicism, which means it copied building styles from other eras in history, and the firm’s hand in constructing a number of the buildings in the downtown area is obvious.

Throughout the entire area today, it’s easy to see that an Italian influence is at play in both style and design. The courthouse, built in 1912, has a large copper dome and is a copy of a building located right outside of Venice, Italy. The city hall, built in 1911 completely in brick, is influenced by Tuscan buildings with its tower and balcony on the front. “It’s definitely Italian,” Bourdier says. Across the street is Immaculate Conception Cathedral, which is built in the Lombardy style of architecture out of Italy and has German and Austrian stained-glass windows. “The thing about Lake Charles is that it does not have the typical French or European style downtown,” he says. “This was Prairie Country, so it was not settled by Cajuns or French or Spanish.”

Cormier recommends that those who are interested in exploring Lake Charles’ historic buildings do some research prior to visiting, especially if there’s a particular type of architecture or design of interest. Margaret Place is known for its voluptuous gardens and bungalows, for instance. Charpentier features homes built from the 1860s through 1920s. “Parking your car and walking the streets can be a good way of pacing yourself to look at the detail of our houses and beautiful gardens,” he says. “If it’s a nice day out, you’re going to see people outside doing things. Because this is the South, they will probably acknowledge you as you walk down the street, maybe call you up for a glass of lemonade on their porch. That’s the best way to discover Lake Charles.”