“Light” is a word that is much bandied about these days when discussing food. It is almost always used in a positive sense, in a way that suggests the food in question is healthy and nutritious, something any right-thinking person would want to eat. The word has even acquired a voguish patina that adds to its allure. It is a slippery designation – amorphous, not easily defined and subject to calculated misrepresentation. In short, “light” is a term guaranteed to warm a marketer’s cold, cold heart.

When I see the term the first question that pops in my mind is: Light compared to what?  The second question is: What do they mean by light? Does it have reduced fat or calories or sugar or carbohydrates? And the third question is: What have they put in it to replace whatever it is that they’ve taken out? Sometimes the additions are worse than the subtractions.

The only way to get a fairly accurate idea of what’s inside a package is to read labels very carefully. Once you’re in the habit of doing that, you’ll be appalled at what you find. In fact, it can be enough to put you off buying any kind of packaged or processed food. Which, in itself, is not a bad idea. The problem is that it’s very difficult to live like that unless you grow and raise your own food or you have a great deal of free time and an income that allows you the luxury of avoiding the center isles of the supermarket.

Our reasons for changing the way we eat vary from person to person. For many of us, the desire to lose weight tops the list. Then, once the extra pounds have been shed, there’s the eternal vigilance required just to maintain that magic number on the scale. For some, high blood sugar is the problem, for others it’s high cholesterol or high blood pressure, or some combination thereof. In addition, there are a host of other medical conditions that require special diets.

People who are on medically supervised diets know exactly what is permitted and what is verboten, but those of us who just want to lose some weight and eat healthfully without making too many sacrifices are on our own. We know that the key to weight reduction is burning more calories than we take in. But because there’s so much conflicting advice about the best way to do that, it’s easy to throw up your hands in frustration and have another helping of something really delicious.

Actually, I think that most of us know what our weaknesses are, but overcoming them is an entirely different matter. Baked goods, particularly bread, and sweets are my undoing. Recently, I was in Lafayette and stopped by Poupart Bakery Inc. for two loaves of their wonderfully crusty and chewy ciabatta, still warm from the oven. As soon as I was back in the car, I started tearing off pieces of bread. I ran a few errands, and by the time I got back to New Iberia, I had finished off one loaf. The other loaf didn’t survive the day. Many of us are in the thrall of some foodstuff that triggers uncontrollable cravings. In my case, going cold turkey is the only way to overcome those urges.

Without making any medical claims, there are a number of fairly simple things we can do when we’re cooking that will reduce the amount of fat and calories in our food. The trick is to use techniques and ingredients that will add extra flavor to replace what we take out. For example, if you’re reducing or eliminating fat from a dish, use additional seasonings in the form of herbs and spices or incorporate some flavorful vegetables or a tasty broth.

The trick is to use techniques and ingredients
that will add extra flavor
to replace what we take out.

Browning meats, poultry and vegetables increases their flavor, but it’s not necessary to brown them in oil. If you’re making a one-pot dish, such as a gumbo or stew, brown your ingredients in the oven or under the broiler before adding them to the pot. In place of using flour as a thickener, try boiling down the cooking liquid to thicken and concentrate flavor. That’s what chefs mean when they use the term “reduction.” Adding pureed vegetables is another way both to boost flavor and thicken broths, sauces and gravies without the calories that come with flour.
And then there’s monosodium glutamate (MSG), which has a long history as a flavor enhancer. Many people try to avoid it, but once you get in the habit of reading labels, you’ll likely be surprised how common it is in processed foods and spice blends. Some people actually are allergic to MSG, but that can be said of virtually any foodstuff. However, the belief that it is somehow a dangerous ingredient to be avoided at all costs has not been borne out by any study of which I am aware.

It has been over a century since a Japanese scientist discovered the naturally occurring presence of glutamates in food and went on to synthesize and patent MSG as an additive that would boost a food’s flavor appeal. More recently, the four basic tastes – sweet, salty, sour, and bitter – have been joined by a fifth taste, called umami, a Japanese word that is variously rendered in English as “deliciousness,” “savory,” “tasty,” or “yummy.” It is this taste (confirmed by the identification of specific umami taste receptors on the human tongue) that glutamates enhance.

MSG intensifies this savory taste, but so do a host of foods that are naturally high in glutamates, such as tomatoes and tomato products, mushrooms (particularly shiitakes), dried seafood (such as shrimp), fermented or cured products (such as cheese), soy sauce, fish sauces, Worcestershire sauce and anchovies, among others. Adding any of those to a dish will help compensate for the loss of flavor caused by omitting other ingredients that are high in fat and calories.

Finally, and perhaps most importantly, in addition to reducing fat and calories, we probably need to reduce the amount of food we consume. We live in such an era of excess that many of us eat considerably more (particularly of fattening foods) than we need. As much as we enjoy a comforting meal that includes bread, rice, gravy, potato salad and beans, with bread pudding for dessert, it might make sense to break with tradition and rethink the menu. 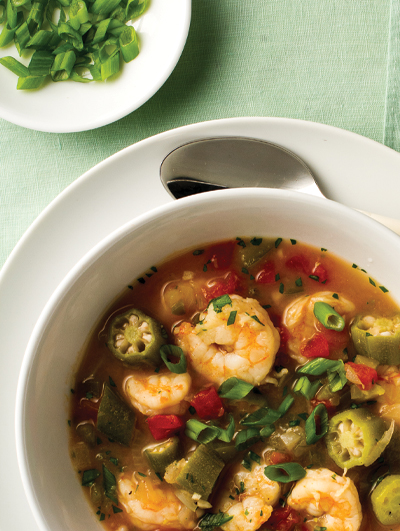 The idea of a gumbo without roux is unthinkable to many, but there are ample precedents in early Louisiana cookbooks. This recipe has no added fat or flour, making it a good choice for dieters. Ground dried shrimp is an excellent flavor-enhancer that can be used in a variety of preparations. 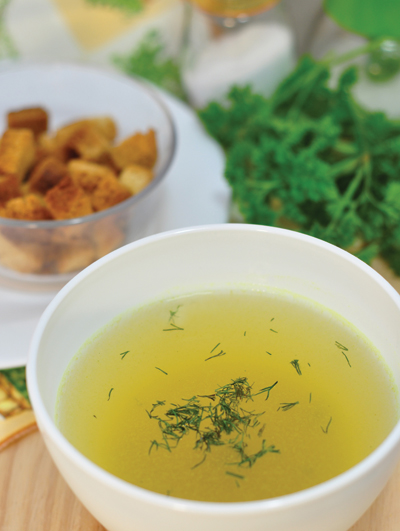 Cartons of chicken broth available in the supermarket should be a staple in every cook’s pantry. The broth’s flavor can be greatly improved by simmering it with other ingredients for half an hour. It then makes a delicious broth (call it a umami bomb, if you wish) to be consumed on its own or used in other dishes. Parmigiano-Reggiano, the authentic Parmesan cheese from Italy, is extremely high in glutamates. Save rinds from the cheese and add them to broths, soups and stews, but remove them before serving.

Combine all ingredients in a pot, bring to a boil, cover, reduce heat and simmer for 30 minutes. Strain. 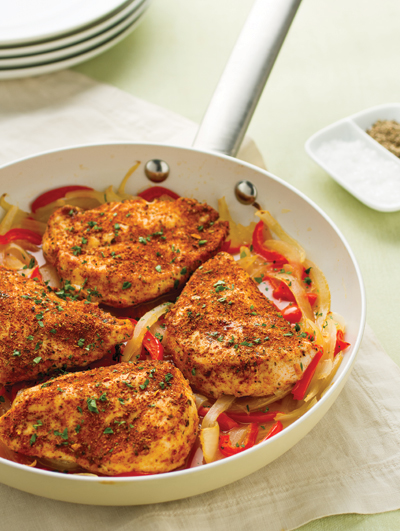 Quick, simple and nutritious. A black iron skillet is the preferred cooking utensil, as the onions will brown under the broiler better than in other types of pans.