Above the faceless couple popped a red flag, for once a welcomed sign.

D.D. Manly gripped her computer mouse, deliberately scrolling the cursor across the desktop. Her wrist shook. Her heart raced. Nervous for reasons that didn’t make any sense to her back then and still don’t today, the 40-something artist from Lafayette clicked the Facebook icon:  “Tanya Evanson accepted your friendship request. Write on Tanya’s timeline.”

“This sounds so silly,” admits Manly. “I wanted to reach out to her, but when it happened, what do you say to somebody like that? I want to express a gratitude for her being her, really.  And we all want that. You’re doing what you do and you inspired me. That’s just really cool.”

They met – the painter and the dancer – in two-dimension.

Upon being named the Official Visual Artist of 2014 Festival International, organizers dumped a heap of photographs from years past on Manly, figuring there’s got to be some morsel of inspiration buried within the stack. Manly flipped through them – No. No. No. No … wait. This one. Manly plucked the picture, staring at it much longer than the others. Look at her hair, purely black suspended by centrifugal force. How the sleeves of her red dress dangled from extended, delicate arms. A focused, satisfied facial expression could be seen clearly on her tilted head. Manly was intrigued. Though she’d sift through all the other photos, none could match the jolt provided by this particular image. 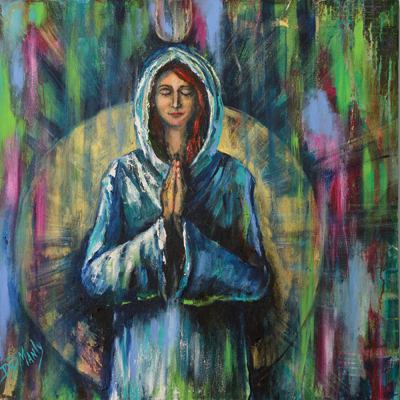 Manly learned the dancer was Tanya Evanson, a poet/vocalist/spoken wordsmith/“whirling dervish,” according to her website. During Festival 2013, the accomplished performer accentuated through dance the unique sound of the band Niyaz, an Iranian-American trio specializing in contemporary Middle Eastern music. While the picture alone provided enough content to paint a poster-worthy portrait, Manly (as is her hallmark) dug deeper, streaming Niyaz songs while dabbing her brush, reading Evanson’s writing, and of course, connecting via social media.

“It’s not so much that I’m curious about the ins and outs of her life. It’s that I’m curious to find what it’s like to be in her presence,” Manly explains. “This is second-hand information, obviously, but when they perform, it’s spiritual in nature. It’s meditative, the dance, the performance. I meditate before I paint, and I believe I’m a channel when it comes to life on a canvas.

It’s not of me. So I felt like they perform in the same way. This is what they do. It’s about something beyond them. And obviously it’s pretty deep, because I heard it touched so many people in the audience. And it touched me.

“I get so curious,” Manly continues. “That’s part of the mystery. I very much believe in being in the energy of this inspiration and getting into the consciousness of it.” 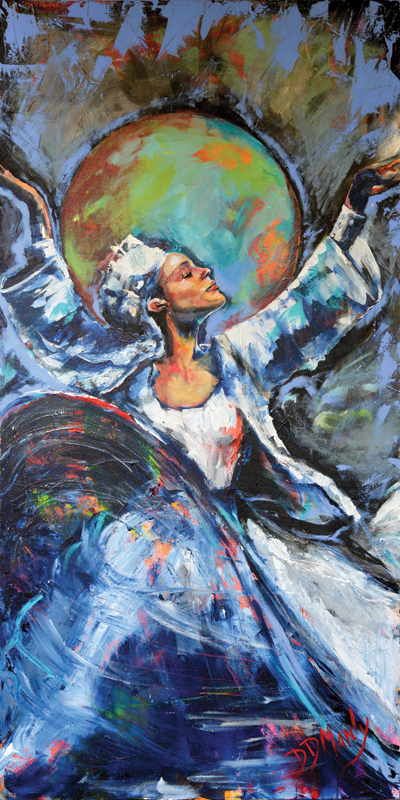 That same method of connection is easy to see in Manly’s other work, specifically her “Doorways” series, which focuses on various building entrances in both New Orleans and Europe. Each piece offers viewers the exact same vantage point – straight on, eye-level, about 10 to 15 feet away – yet differs in boldness of color and use of movement.

“It’s a metaphor for life. It’s a mystery. What’s behind the next door?” Manly says. “There are so many transitions in life, and you don’t get all the answers. You see the façade, but you want to look inside. It’s that curiosity about what is next.”

Manly asked those same questions throughout difficult internal dialogues in both her academic and professional careers –the answers resulting in her break-up and make-up with this passion for painting. A Visual Arts major at UL, Manly switched focuses just before finishing her degree coursework, choosing to chase a Bachelor’s in Health Promotion and Wellness because it afforded a more stable future. For 15 years, Manly worked in private practice as a licensed counselor, assisting on occasion in the bariatric unit at Lafayette General Medical Center.

Yet for all her success, there was no outlet – no conduit for the stress and worries of life to flow. Partially at the urging of her family, Manly reconciled with painting. Every room of the house became her studio – kitchen, garage, dining area. Even today, approximately a decade after her artist rebirth, there remain streaks of paint splatter at the base of some of those walls.
“I felt like, ‘Am I fulfilling my purpose in life? Am I doing what God put me here to do?’” Manly wondered back then. “It’s that turning point where I think I have a bigger purpose. It was a spiritual crisis, that’s the best way to describe it, it was a spiritual crisis. 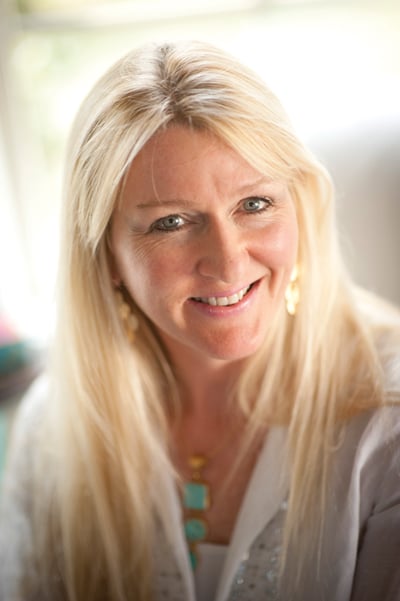 “And as soon as my brush re-touched the canvas, I had something to say,” Manly continues. “And the only way to ‘say’ is to show. But that wasn’t easy. Because, this thing I have to say, will anyone want to hear it? How will it be judged? All that. You’re excited to have a voice, but you’re cautious and afraid as to the response to that voice.”

Gallery 549 on Jefferson Street featured much of Manly’s early work. From there, her paintings were/are regulars at The Big Easel annual display in River Ranch, though Manly admits nothing yet compares to the Festival International distinction – an honor she’s been incredibly gracious of and plans to bask in until the final musical note is heard later this month. As for what comes next, Manly isn’t entirely sure, though she’d like to hone the craft of, as she puts it, “Becoming more and more of a channel – following my brush instead of my brush following me.”

“That doesn’t always equate into beauty on canvas,” she says. “The transition is going from forcing an image on canvas to letting that image present itself intuitively. Back and forth. Going from the things that are recognizable and impressionistic to just complete freedom and bowing to the happy mistakes that occur on the canvas.”