In Acadiana, a good meal is a family affair that’s taken seriously, despite its celebratory nature. So it’s only natural that area chefs hail from
impressive culinary backgrounds – some of which span generations. Lyle Broussard of L’Auberge was raised in a restaurant family, cooking up South Louisiana favorites that won Al Roker over when he visited for a TODAY Show special. Brian Blanchard, who owns multiple restaurants in Acadiana, learned on the job, but his Italian grandfather made his business dreams come true. Richard Hurst and his wife, Lori, continue their family legacy that spans almost a century with Poor Boys Riverside and Little River Inn. And you’ll taste flavors that hark back to Chef Collin Cormier’s family farm when you visit his restaurant or drink his innovative Swamp Pop sodas. 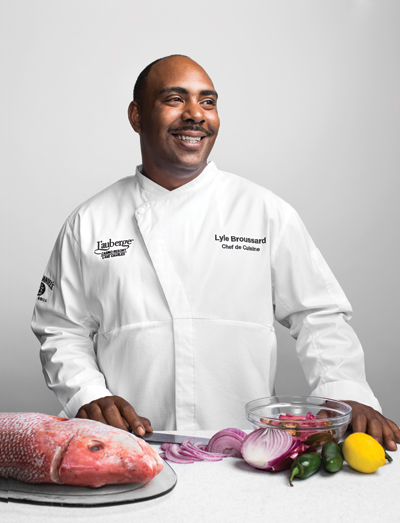 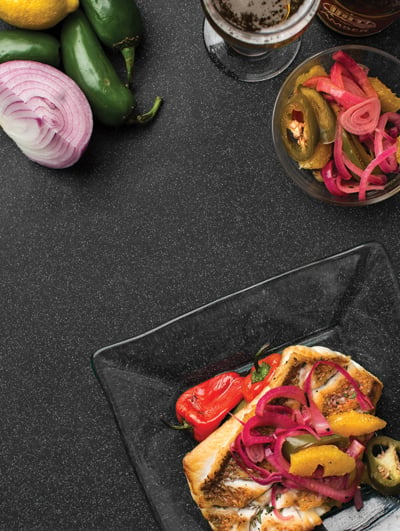 The only job I’ve had was working in the kitchen. I just dove into it, head-first.

It’s not every day that Al Roker and The TODAY Show come to visit, but when the team showed up at the Jack Daniel’s Bar & Grill at L’Auberge Casino Resort in Lake Charles, Chef Lyle Broussard was ready for it all.

“We did the whole Louisiana thing for him,” Broussard recalls. “Everything you can get down here, we did for him.”

The Broussard native has served his “Big Ass Burger” on The History Channel’s All You Can Eat show; participated in the 2014 Hoffman Media Restaurant Take-Over in Birmingham, Alabama, promoting Louisiana cuisine (he’ll do it again in October in Austin); and his pan-roasted Gulf grouper took second place in this year’s Louisiana Seafood Cook-off in New Orleans. This fall he’s scheduled to be on Chef Jeff Henderson’s show, “Flip My Food.”
Broussard began his career like many in South Louisiana, watching family members cook up culinary dreams. His parents owned a restaurant in Lake Charles for years.

“That’s all we did, five days out of the week,” Broussard says of working the family business. “The only job I’ve had was working in the kitchen. I just dove into it, head-first.”

He began as sous chef at L’Auberge in 2005, promoted up the ranks to now overseeing the Cajun and Creole cuisine — in addition to oversized burgers — at Jack Daniel’s. He’s since earned his Certified Chef de Cuisine through the Culinary Institute of America and was featured in Thrive Magazine of Lake Charles as one of “13 Thriving 30 Somethings” in 2014.

Although Jack Daniel’s serves up barbecue and grill specialties, Broussard considers himself “a seafood person.” He creates crawfish cakes every Saturday, topped with a housemade charred sweet pepper relish. Another favorite is the “cracklin’ dust” used to coat seafood, a combination of crushed cracklins and other items such as Parmesan cheese and pecans that top everything from catfish to grilled oysters.

In his spare time, Broussard trains Tennessee Walking Horses and enjoys trail rides throughout southwestern Louisiana with family and friends.
“It’s just relaxing,” he says of the rides. “And when we’re there, we end up cooking. That’s when the black pots come out.” 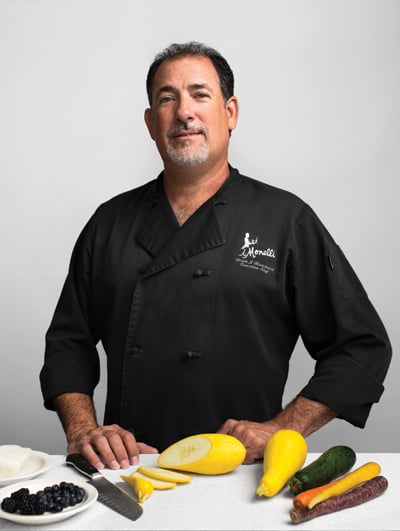 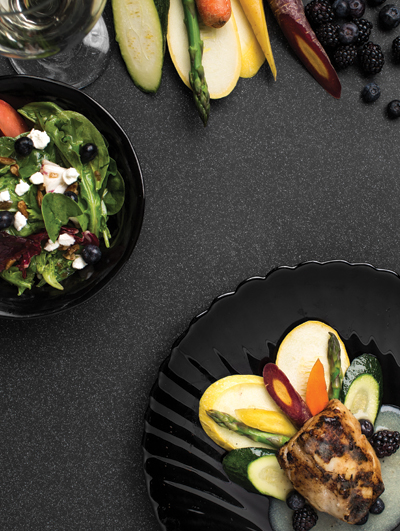 … There is nothing you can’t accomplish if you put your mind to it.

Brian Blanchard intended to be an engineer, enrolling at USL (now the University of Louisiana at Lafayette) while supporting himself washing dishes at iMonelli’s restaurant. By the time he graduated he had worked up to maître’d, waiter and chef when the owner offered to sell him the restaurant.

“My mama always told me as a young man that’s there is nothing you can’t accomplish if you put your mind to it,” Blanchard says.

He was 23, and his bank’s loan officer wouldn’t let him sit down, let alone loan him the money. But his Italian grandfather Joseph Sefalu gave him an advance, and Blanchard became owner of iMonelli’s, working nonstop for years learning the business.

Today, in addition to the long-standing iMonelli’s, Blanchard owns Café JoJo’s in downtown Morgan City and River Oaks Catering and Event Center in Lafayette. He recently purchased a building in Morgan City for his NicoBella catering service — named for his twins Nicholas and Isabella — and took over the property next to Café JoJo’s for the casual Bay City Bistro, named for the Bay City Saloon and Oyster Bar that once occupied Café JoJo’s building.
Turns out Blanchard wasn’t a bad loan risk, after all.

“I have carpenters who work for me full-time,” he says. “They move around constantly.”

Blanchard serves Italian, Creole and Cajun cuisine, sometimes a combination of all three. Sauces are his specialty, and he constantly experiments to offer new and innovative dishes. His pesto vinaigrette, for instance, was created for his caprese salad, a more delicate topping that covers the mozzarella cheese and tomatoes without the cumbersome leaves of basil. The result is delicious and understated and doubles as a great marinade for beef. His beef tenderloin swims in a cognac peppercorn cream sauce and the fabulous seafood crepes appetizer is topped with a roasted pepper cheddar cheese cream sauce.

“We’re famous for our sauces,” Blanchard explains. “You’ll be hard pressed to find two dishes with the same sauce. I’ll bet there are 20 to 25 different sauces we do. I have fun with them. Sauces are my thing.”

Blanchard has no qualms about hiring young people, eager to give those with talent a chance. In his 26 years of owning restaurants, he notes how much the culinary atmosphere has changed, thanks to those in the younger generations.

“They grew up in The Food Network era,” the 50-year-old says. “They know what it’s all about. They put so much life into iMonelli’s, River Oaks — all of them.

“I remember that very well,” he adds. “I relish that underdog role.” 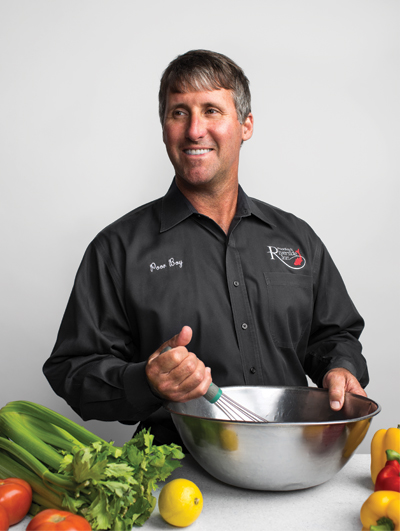 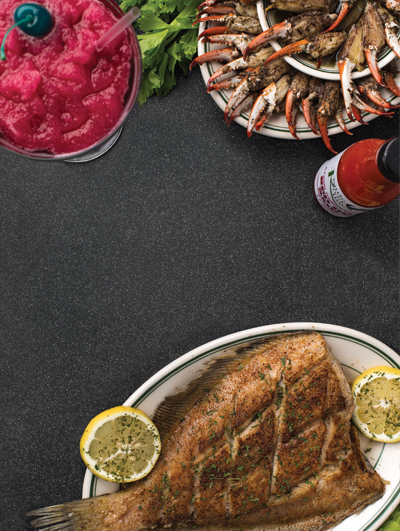 We opened in December, and there were people lined up outside.

The restaurants of Richard and Lori Hurst are a true family affair, dating back decades. The business began with baker Hulo “Poor Boy” Landry in 1932 who hand-pushed a snowball wagon throughout Lafayette in an effort to make money during the Depression. He sold sandwiches on the side, and when the business took off, Landry moved to the banks of the Vermilion River into an expansive restaurant that included live music. The flood of 1940 forced them to higher ground, but it was the expansion of Pinhook Road that drove the business to the country near Broussard, where Poor Boy’s Riverside Inn has been since 1977.

“That was the end of town for a long, long time,” says Richard Hurst, Landry’s grandson. “We moved out here to the middle of nowhere. There was no one around then.”

At the time, the restaurant was run by Landry’s son-in-law and Richard’s father, Larry Hurst, who managed the establishment with his wife, Kathlyn. The plan was for Larry Hurst to retire to the country, so the new restaurant only offered 125 seats to the 580 seats once included in the Lafayette restaurant, Richard Hurst says.

“We opened in December, and there were people lined up outside,” Hurst says.“We had a fireplace going. We had people standing in the dining room waiting for a table.”

Today, the restaurant and catering arm are run by Richard Hurst and his wife, Lori, and Kathlyn Hurst still contributes in the kitchen. The family also owns and operates Little River Inn in the old Trappey’s building in New Iberia.

Family touches are all over the menus here. The crabmeat Imperial, a combination of lump crabmeat, mushrooms and pimientos cooked in a rich cream sauce, was Hurst’s grandmother’s recipe. Lori Hurst spent months working up a crab cake dish, jumbo lump crabmeat in a creamy cheese filling that’s fried and served with a Creole honey-mustard glaze. Richard recently took that crab cake filling and topped it on French bread with extra butter and cheese and baked it for their new offering, “crabbies,” a crabmeat bruschetta, if you will.

“When I want something to eat, I do it, and it becomes a menu item,” he says.

Seafood reigns here, something Larry Hurst instituted when he ran the show. Larry Hurst was a trendsetter, Richard Hurst insists, serving up seafood dishes that were not popular at the time, such as étouffée and boiled crabs and crawfish.

“When my dad started the redfish in the mid-1960s no one ate it,” Richard says. “And then it just took off.”

“He was the first to top the fish,” Lori adds.“He had chefs coming over here and looking at what he was doing.” 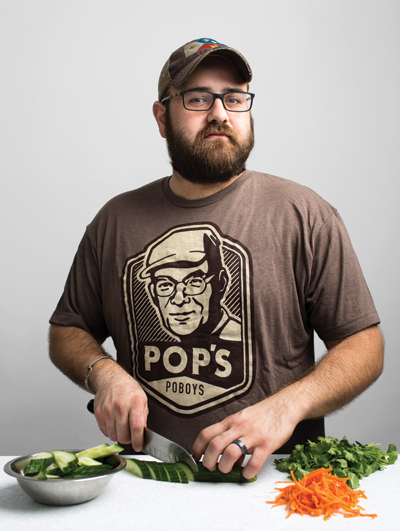 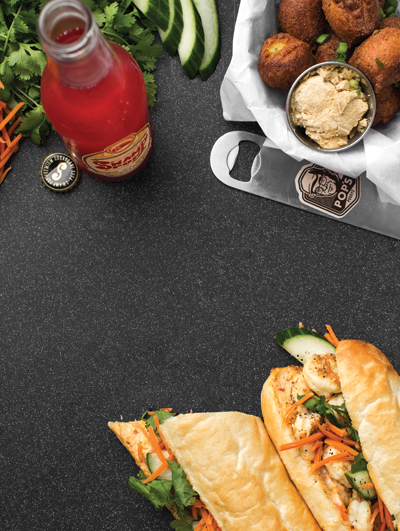 Our Louisiana flavors are based on growing up on the farm.

When Chef Collin Cormier of Lafayette was studying law at the University of Louisiana at Lafayette, a friend suggested he work in the field to make sure his career choice was the right one. He did, and quickly realized that law was not for him.

“The men in my family were all the good cooks — my dad, my grandfather,” Cormier explains, but he initially never thought of cooking as a profession.
He decided to try out the Louisiana Culinary Institute and, remembering his friend’s advice, got a job in the field.

He cut his teeth at Tsunami, then worked in the Caribbean and as executive chef at Blue Dog Café in Lafayette. Four years ago, Cormier moved out on his own, opening Viva La Waffle gourmet food truck that created innovative sandwiches with a waffle canvas and started a popular trend in Lafayette. This spring, Cormier moved into a downtown Lafayette space for his latest adventure, Pop’s Poboys.

“We always looked for a brick and mortar for Viva La Waffle,” Cormier says.

Once they acquired the 1930s building, Cormier envisioned a different style of restaurant. Like Viva La Waffle, which took a classical item and served it up in unique ways, Pop’s Poboys offers different takes on the classic sandwich.

“It (the space) felt like it needed to be a little more classy,” Cormier says. “We thought it was a good vessel to experiment and push the envelope where people think about poor boys.”

“Our Louisiana flavors are based on our growing up on the farm,” he says.

Diners will get a glimpse of Guilbeau in the restaurant’s logo, plus spot a nod to family members — Cormier’s father is named Jack, as is Cormier’s son — as menu items such as the “Jack Special Poboy” consisting of turkey, ham, smoked gouda and a roast beef debris.

Pop’s Poboys is open for lunch Monday through Saturday and for cocktails and small plates as the “Guerilla Bar” on Fridays and Saturdays. In addition, the restaurant hosts special events.

Categories: Restaurants, Things To Do