Connoisseurs know the necessities required for this Louisiana favorite, a poor boy sandwich: the right bread, meat done just right and toppings the way you want them. The best bread is a yin and yang sort of blissful thing. It’s got to have just enough crustiness to hold up and just enough soft to soak up. The meat is generally the most debated poor boy feature – and watch yourself should you choose to speak of it openly, because people take their poor boy meat preference seriously. The topping, dressing or debris options are many – from chopped cabbage, lettuce, tomatoes or the precise quantity of a particular mayonnaise or special sauce. Never underestimate the importance of the dressing and its strategic role in the poor boy hierarchy of goodness.

Rarely do you find someone in Acadiana who doesn’t have a strong poor boy opinion. The vast majority from these poor boy parts have as much conviction for their particular poor boy preference as they do on a Sunday morning at church or a Sunday afternoon watching the Saints. Criticize someone’s chosen poor boy and them’s fighting words.

Whether you’ve been there before or not, try discussing poor boys with anyone who’s spent any time in Lake Charles. Use your watch like a timer – within 15 seconds, you’ll be hearing all about Darrell’s. I don’t know what Darrell’s is sprinkling on their sandwiches, but people who have eaten them will throw down over that poor boy’s honor as the best sandwich ever.

Specifically, the Darrell’s Special.
Whether they go there on a weekly basis or people who used to visit their grandparents there in long ago summers, Darrell’s fans don’t play.

For example, Allison Davis Russo spent the summers of her youth visiting her Meemaw and PawPaw in Lake Charles. Years later, living in Virginia, she still gets a craving for a Darrell’s Special.

“During one of those summers, I was introduced to Darrell’s – and all subsequent visits to Lake Charles included a lunchtime outing to Darrell’s. My favorite poor boy was something called the Darrell’s Special – a mix of ham, turkey and roast beef, gravy, cheese and jalapeño mayo. The place is a total dive, but their poor boys are definitely crave-worthy.”

The Darrell’s Special is still as it was and is in Russo’s memory.

Lucie Monk, who is a wizard in her own kitchen and a Baton Rouge chef, says, “Oh, man! At Darrell’s, the combination of meat and cheese is classic, but the way it hits the freshly baked crusty bread is killer – I think that’s the key.”

Eric Britt, who lives in Lafayette, agrees.
“It’s an experience worth the drive,” he says. “My wife threw me a surprise birthday supper there a couple years ago. I had friends drive from Baton Rouge and Lafayette for the sandwich – not me.”

Britt describes himself as a “food skeptic.”
“You’ll never hear me say that is the ‘best food.’ A friend told me about Darrell’s saying “It’s the best sandwich ever,” and it’s in a sports bar. I was like, ‘Yeah, right.’ But I’ll try anything – and OMG – the Darrell’s Special. They make their own bread and a jalapeno mayo. I couldn’t finish it. A buddy got their shrimp poor boy, and I sampled. The shrimp are pan-fried, just awesome.”

The moral of this story is, the next time you’re in Lake Charles, you’ve got to give Darrell’s a try.

Theresa LaCaze Smith has been an Old Tyme regular customer since it opened in 1982.

“I love the oyster, shrimp and roast beef poor boys,” she says. “Now my kids are addicted, too. They, as well as my husband, are meatball poor boy fans.”

“I’ve been addicted to oyster poor boys my entire adult life, and I look for the ones with big, hot, meaty, tender, just-out-of-the fryer oysters, a not-too-thick crunch of breading, high-quality French bread and liberal mayo plus all the other dressings.”

Matt Jones prefers the iconic Olde Tyme shrimp poor boy. He also makes an interesting observation about the faith required in the process of ordering from Olde Tyme. “There is an inverse relationship between how far ahead you order and when you get your food,” he said. “Call an hour ahead, and you will wait 30 minutes once you get there. Call ahead from the parking lot, and it will be waiting for you when you hit the counter.”

Chris’ Poboys is understated and some might describe their restaurants as low on ambience and charm – after all, one of them is in a gas station. But if you’re not a Chris’ fan already, don’t let any of that stop you because none of it matters when one of their roast beef poor boys is sitting in front of you.

That’s when the stars align and all is well and right with the world.

Yes, their gumbo is great. And even though their sweet potato fries aren’t available at all locations, they’re worth driving across town. But sweet goodness, when you get that roast beef poor boy, it’s like magic. It disappears.

If you’re from Houma, you know. If you’re not from Houma and you’re driving through, don’t let the humble establishment dissuade you. You’ll want to do yourself a favor and go to Mr. Po-Boy – even if the parking lot is crowded.

With direct access to fresh Gulf shrimp, the shrimp poor boys are a great choice, but at Mr. Po-Boy, it’s the roast beef poor boy that almost everybody loves best. They’re sloppy roast beef poor boys with broken up beef in a delicious gravy. There’s a full selection of seafood, chicken and meats sandwiches – and if you’re into that sort of thing, the gravy fries aren’t bad either. 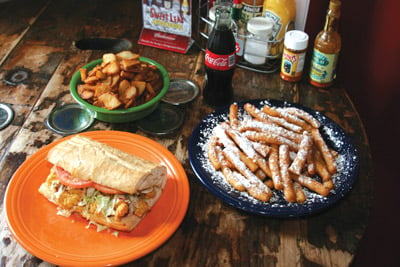 If you’re looking for your poor boys in a quaint, cozy and country setting, get thee to Villager’s Café in Maurice. The giant spindle tables, homemade fries and Cokes in little bottles are just gravy when it comes to the poor boys. Kristy Robin Landry prefers the Villager Special.

“The restaurant itself has an old-fashioned feel to it,” she says. “My favorite is the villager poor boy. It has a generous portion of ham and roast beef. They add pepper jack cheese and au jus gravy. The peppery cheese gives it a little kick. In my opinion, they add the perfect amount of gravy – just enough to make it juicy without making the bread soggy.”

Sitting in the middle of a strip mall on Johnson Street, Louisiana Po-Boys is quietly gaining momentum with its variety of poor boys and loyal following.

Debbie Hanrahan Arceneaux said the Time Plaza establishment is her hands-down favorite for poor boys. “My favorite is the catfish on wheat. It’s to die for,” she says.

Don’t discriminate against Louisiana Po-Boys because it hasn’t been around forever. It may not have the history of some of the other establishments, but their poor boys speak for themselves. Just because you didn’t grow up eating them doesn’t mean your children shouldn’t.