To Roux or Not to Roux 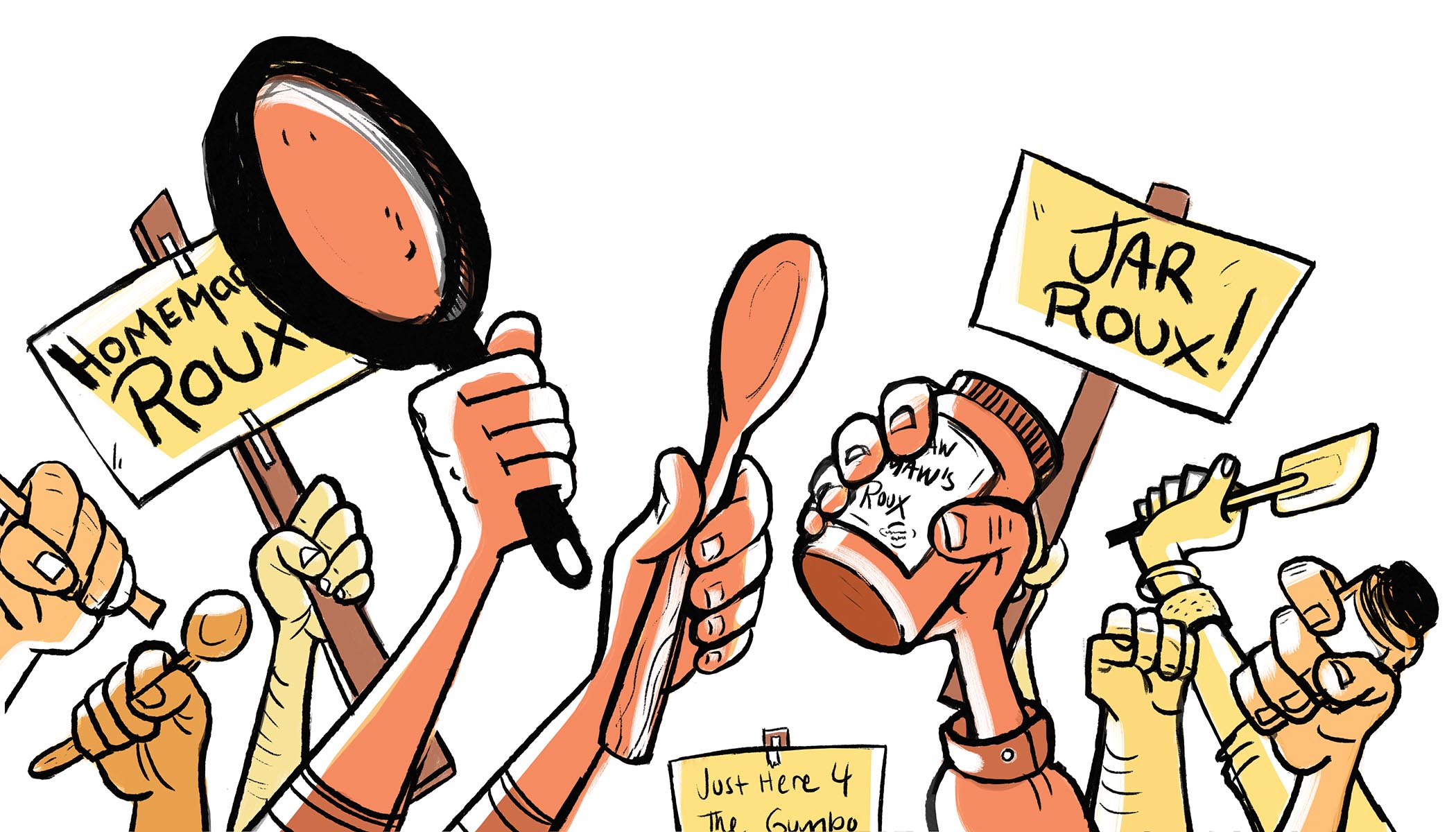 The question came up innocently enough on a Facebook group page about south Louisiana culture. Some of the most intense discussions seem to revolve around food, which should be no surprise since so many of our conversations involve what our next meal will be, often with our mouths already full with the current meal. Debates about gumbo — whether tomatoes can be an ingredient or if potato salad is served as a side dish or plunged in it — can sometimes tear families asunder and destroy relationships. They even serve as a litmus test for marital compatibility. Given the intensity of these opinions, one would think the question of whether there is any difference between a gumbo made with roux from a jar and one prepared with homemade roux would not be fiercely argued. One would think, but one would be mistaken.

If there is one thing we like as much as eating, if not more, it is cooking. Everyone has at least one secret recipe handed down through generations immemorial for everything from rice and gravy to bread pudding and oyster dressing to sweet dough pie. In these cases, we tend to respect differences and attribute them to regional variations and family traditions. There even seems to be universal agreement on the proper tools of the trade: cast iron pots and skillets, well-worn wooden stirring spoons and Magnalite roasting pans are de rigueur in any self-respecting south Louisiana chef’s kitchen. But when it comes to preparing the base of the most basic of classic south Louisiana dishes, a deep divide opens. Even though most of us no longer go out to the yard to choose the unlucky chicken going into the pot nor do we for the most part harvest the vegetables comprising the “Holy Trinity” from our gardens, we still take pride in self-reliance and an ethos of do-it-yourself. It seems the last vestige of the days when everyone grew or raised almost everything edible is in the graceful gesture of slowly stirring the simmering mixture of oil and flour. We do not always have the time, nor the desire to stand motionless except for the constant swaying of one’s arm, silent except for the wooden spoon scrapping the bottom of the pot, for what can seem like an eternity. On the other hand, there are those who swear by one brand or another and who consider the whole undertaking of homemade roux a monumental waste of time. The disparities seem insurmountable.

Personally, I am forced to admit that I cannot taste the difference, but I know there one. It is in the zen-like practice of mindful patience in bringing the roux to the desired shade of brown. It is in the metamorphosis of motion, heat, fat, and ground grains into an experience to be shared among friends and family. It is the tie that binds disparate components into a cohesive composition of comestible camaraderie. This simple act transforms the gumbo from a mere provider of calories into nourishment for both body and soul.