Well into a Tuesday similar to the last one and much like the next, 77-year-old Red Lerille has bicycled 20 miles; blasted his pecs, triceps and biceps; picked up your dirty towels; completed any lingering paperwork; prayed for the forgiveness of sins – and oh, yeah, he’s piloted a plane today, too.

In 15 minutes or so, the pathetic slacker sun will get off its lazy butt and join him.

A self-described entrepreneur whose 20-acre muscle mecca rises above the trees and strip malls of Doucet Road, the one-time Mr. America bodybuilder still possesses the vigor of a caffeinated teenager – diligently adhering to a daily regimen requiring him to open his eyes shortly after the bartender yells for last call.

“I set my alarm for 2:20 a.m.,” he says. “But of course, I’m usually up before then. Guess you could say I’m a morning person. Working out has been a part of my life since I was a kid. That’s never wavered.”

Lerille married his passion and profession. Opened in 1959 on the site of an abandoned lumberyard and outfitted with homemade gym equipment, Red Lerille’s fitness club mushroomed into one of the finest fitness facilities anywhere. The place has everything: full-court basketball; decked-out male and female locker rooms; racquetball, squash and tennis courts; an army of treadmills; matching indoor and outdoor pools; an upstairs weight room and a downstairs weight room; a boxing room complete with a ring. And finally, it’s got Red – everybody’s buff pawpaw whose salutations still drip a hard-to-lose native Westbank accent. He’s always around – scrubbing this and that; signing that and that; fixing this and that; choosing to stand all day, never sit.

“I looked at the way Joe Gold ran his gym – the guy who founded Gold’s Gym,” Lerille says. “Even when his gym grew into a franchise umbrella, he always had his own little gym and he never messed with it much. But he always made one improvement per month. And I said, ‘Boy, when I open my gym, I’m going to do the same thing – I’m going to make an improvement every month.’ I think that’s helped me more than anything. It’s gradual growth. Am I excited about how big we are? Well, it’s interesting. But if I had to do it again, I’d stay small. We can’t be like the little 24-hour places where one man can run the whole show. We could do that when I first opened, but then again, we had no competition.”

In celebration of the club’s recent 50th anniversary, employees young and old, from then and now, packed the place, chowing down on cake, jambalaya and sugary beverages with unpronounceable additives. Red, true to form, didn’t touch any of that junk.

It’s been that way, really, since he was 7 years old. He recalls his Uncle Harold constantly flexing and showing off a military-hardened physique. Red – a short, skinny guy at the time – was predictably enamored. Weight lifting throughout high school and during his own military service, Lerille captured the 1960 Mr. America bodybuilding title and was named America’s Most Muscular Man.

“The big difference now is the abundance of information out there about health,” Lerille says. “That did not exist back [in 1963]. I’ll go back to my childhood. … The only magazine out there was one by Bernarr Macfadden, who nobody has ever heard of, called Physical Culture, and I used to read that sucker from cover to cover – advertisements, the whole works. Then, a little later, you had Strength & Health magazine,Your Physique and Muscle Power. Those were the magazines.

“Go to a rack now; there’s probably 100 on fitness. Heck, they might have a dozen on triathlons alone, and that’s probably an underestimation. Yes, obesity is a problem, but the people who are in shape are in shape. They’re in super shape. And so your club has to fit their high standards and needs.” 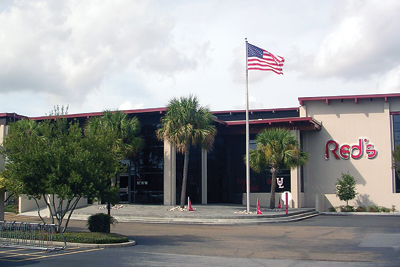 The massive thumbprint left by Red’s current club does just that, making it tricky to fathom that this modern-day health club colossus was once the little-gym-that-could. After working at another Lafayette gym for a couple of years, Lerille opened his own place on Johnston Street. Short on funds, he borrowed $250 from his father to cover the first month’s rent.

“Guess it worked out pretty well,” Lerille deadpans. “The way I looked at it, I didn’t have a pot to pee in, so whether I made it or not didn’t make a tremendous amount of difference.”

The membership roster at Lerille’s club is now so expansive it can fill the Cajundome twice. His monthly utility bill exceeds what the average college graduate makes in a year. On par with festivals and outdoor concert series such as Downtown Alive!, Red’s club is the community’s common ground, attracting a wide swath of clientele – a melting pot where you actually sweat. Factory workers come to blow off steam after punching the clock while their white collar bosses gulp protein smoothies near the snack bar, everyone there (presumably) for the same reason.

“Nobody wants to work out,” Lerille says. “You want that damn feeling when you’re finished. Man, it’s good. Whether it’s run, swim, bike or lifting weights, when you’re done – wow, what a feeling! Nothing compares. You can’t buy it. You have to earn it. I’ll tell you a story …”:

About a year ago, one of Red’s sons called his old man up and said, “Let’s take a walk.”

“Where are we going?” Red asked.

“Hm, can’t we go around the block?” Red wondered aloud.

As Mark further explained, he had just finished watching a movie starring Martin Sheen called The Way. In it, a father completes the 600-mile trek of the Way of St. James – a Christian pilgrimage concluding at the Cathedral of Santiago de Compostela. Mark suggested they hoof the entire thing. Red said yes but decided they should bicycle the route. It’s harder, he told Mark, which was true. On the way, Red lost 15 pounds, the last ounces dripping off him during a grueling 10.5-hour final day, but he is quick to point out, “I kept up with those little rascals.”

When he returned to Lafayette, equipped with enough equity to gobble a carton of ice cream or slam the snooze button, Red still set his alarm for 2:20 a.m. and squeezed in a workout before opening the club. But he’s slowed down a little, he admits. On Thursdays he leaves work at 6 p.m. instead 7 p.m., citing the hour fudging as his “semi-retirement.”

“I’d say I’m more excited about working here now – picking up and taking folks on membership tours – than I was 50 years ago,” Lerille says. “A lot of my friends who own businesses don’t go in there day-to-day. I don’t get that. I like it here. We’ve had three or four generations who have been members here. The one-time 18-year-old who worked his first job here now is dropping off his 18-year-old for his first job. I hate to say it, but it’s true: If I didn’t work here eight, nine, 10 hours a day, I might go crazy. This is my life.”

“I’d say I’m more excited about working here now – picking up and taking folks on membership tours – than I was 50 years ago. A lot of my friends who own businesses don’t go in there day-to-day. I don’t get that. I like it here.”