Today’s young Cajun and zydeco musicians face a choice: adhere strictly to the traditions and represent the cultures, or expand upon Acadiana music and hope listeners embrace it instead of being offended.

The website of the otherwise provincial Cajun band Teechaoui Social Club promises “No New Orleans” in their sound. When asked to clarify, Teechaoui bassist Alan LaFleur responds simply, “Bourbon Street,” before clarifying his desire to make sure future generations hear authentic Cajun music music: “In New Orleans, John Fishburn plays a good version of Cajun music, but everyone else is stuck on Bourbon Street – which isn’t bad but it’s a long ways removed from Cajun culture.”
Teechaoui (a word meaning ‘little raccoon’), on the other hand, plays, “Just what you’d hear at my grandpa’s house,” LaFleur promises.

After a lifetime playing rock ‘n’ roll, rockabilly and surf (he’s led the band the Gin-n-Tonics since 1996), LaFleur moved home to Lafayette after 9/11 and finally started playing Cajun music. He spent eight years in the Lost Bayou Ramblers, infusing Cajun music with a modern sound.

His Teechaoui Social Club started fairly recently on a porch during a community boucherie. “I live in this house from the 1820s,” explains LaFleur. “And we have a boucherie there. At a boucherie you can’t come and watch; you come and learn how to do something. You make boudin; you learn by doing, not by watching.
We get about 80 people every time with 20 people playing music for about 18 hours of that day. That’s where I met my band. None of these guys are professionals except for me.”

LaFleur describes the Social Club as “a mix of people from all around Lafayette, all mixed into one music. It’s a more high-energy dancehall based style.
It’s Lafayette music.” Rather than let New Orleans influence his music, he aims to influence New Orleans, mostly with a monthly Cajun and zydeco night at hard rock club, Siberia. There, each month’s show will feature LaFleur’s band, plus another rural band of his choosing. “There are hundreds of these bands out there, each with a very different feel and viability, a different way their area spoke French and played music,” explains LaFleur. “This band’s story, and the band 10 miles down the street, are very different, so they sound different.”

I first caught LaFleur playing bass at Siberia back in April, with both Teechaoui Social Club and opening act, La Bande de Plaquemines Brulee, from Churchpoint.
Like many new Cajun and zydeco bands, the members of La Bande de Plaquemines Brulee are all in their 20s, but have been playing since they were kids.
“Churchpoint bands have the sound of Churchpoint,” says LaFleur. “They don’t like the faster dancehall. Churchpoint guys play even slower than in Eunice.
The music’s not as flashy. You won’t see my band shed a tear in the middle of the song, but with those gentleman, you’ll see that.”

The members of Feufollet from around St. Landry Parish also first took the stage as kids and by now cannot be considered a “new” band – except in their hybridized Cajun sound. The groundbreaking band, led by multi-instrumentalist (but mostly fiddle player and accordionist) Chris Stafford highlights its Cajun roots with rockabilly, classic country and new-school indie rock. In 2010, Feufollet’s self-released album En Couleurs was Grammy-nominated in the Best Cajun or zydeco category alongside legends Chubby Carrier, the Pine Leaf Boys, Cedric Watson and D.L. Menard.

The band recently raised over $30,000 to release their sixth album, which promises to feature some poppier tunes sung in English. This past Jazz Fest nola.com gave Feufollet’s new singer Kelli Jones-Savoy the thumbs up, writing that, “she moves from a piercing near-howl in Cajun French to a softer, folksier sound to husky and haunting to a slow, sultry burn.” 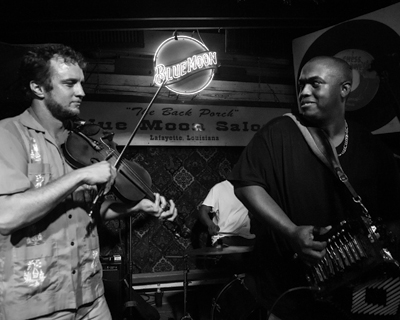 After a 20-year career, accordion player and multi-instrumentalist Corey Ledet is not afraid to try new things, as evidenced by the zydeco-and-brass band mash-up of Stevie Wonder’s “Higher Ground” on which Ledet plays accordion. Thirty-two-year-old Ledet traveled from his home in Houston each summer as a child to Parks, where he immersed himself in Cajun culture, especially the music. At 10 years old he began drumming for Houston-based band Wilbert Thibodeaux and the Zydeco Rascals before finally moving full time to Parks. In 2003 he formed his own zydeco band, which made Ledet famous for adhering to the sound of zydeco founding father Clifton Chenier. On his 2004 debut solo CD 3 Years 2 Late Ledet mixed first-generation zydeco, Creole, nouveau R&B and swing-out and was leaning toward accordion-based blues on 2012’s Nothin But the Best.

Ledet recently entered into a new project, Soul Creole, featuring Louis Michot of the Lost Bayou Ramblers and his wife, Ashley. “Fiddle and the triangle, I don’t normally have that in my Zydeco band,” says Ledet regarding the differences in his various bands. “This might sound strange, but we all also like ‘80s music too, so we’ll slip in a little of that. But otherwise the new band is more Creole.”

As for Ledet’s zydeco ambitions: “I am planning on doing the same as Feufollet, branching out, writing my own tunes, maybe some more mainstream stuff. We used to stick to the standards, but I might write like a country song with accordion, or a pop song on accordion.”

After more than 20 years fronting the Blue Runners, frontman, guitarist and vocalist Mark Meaux has started a fresh band, the Zordico Stompers. With a whole new repertoire and new possibilities, Meaux’s new style is still in the air. Though the Stompers feature some of his old Blue Runner bandmates, Meaux says, “I am still figuring out what this new band can do!” While he claims the new band is “more traditional” than his former, Meaux definitely aims to blend genres. “We started in the Blue Runners playing started off doing punk rock, and then zydeco, and R&B – which sounds ridiculous, but it’s a roots thing. We liked music that was stripped down, not that complicated. The biggest influence for us besides Clifton Chenier was the Carrier Brothers. In the new band we’ve incorporated Cajun music and more Creole music. That’s the fun: It’s all moving parts, and you fit the right instrument with the right tune.”