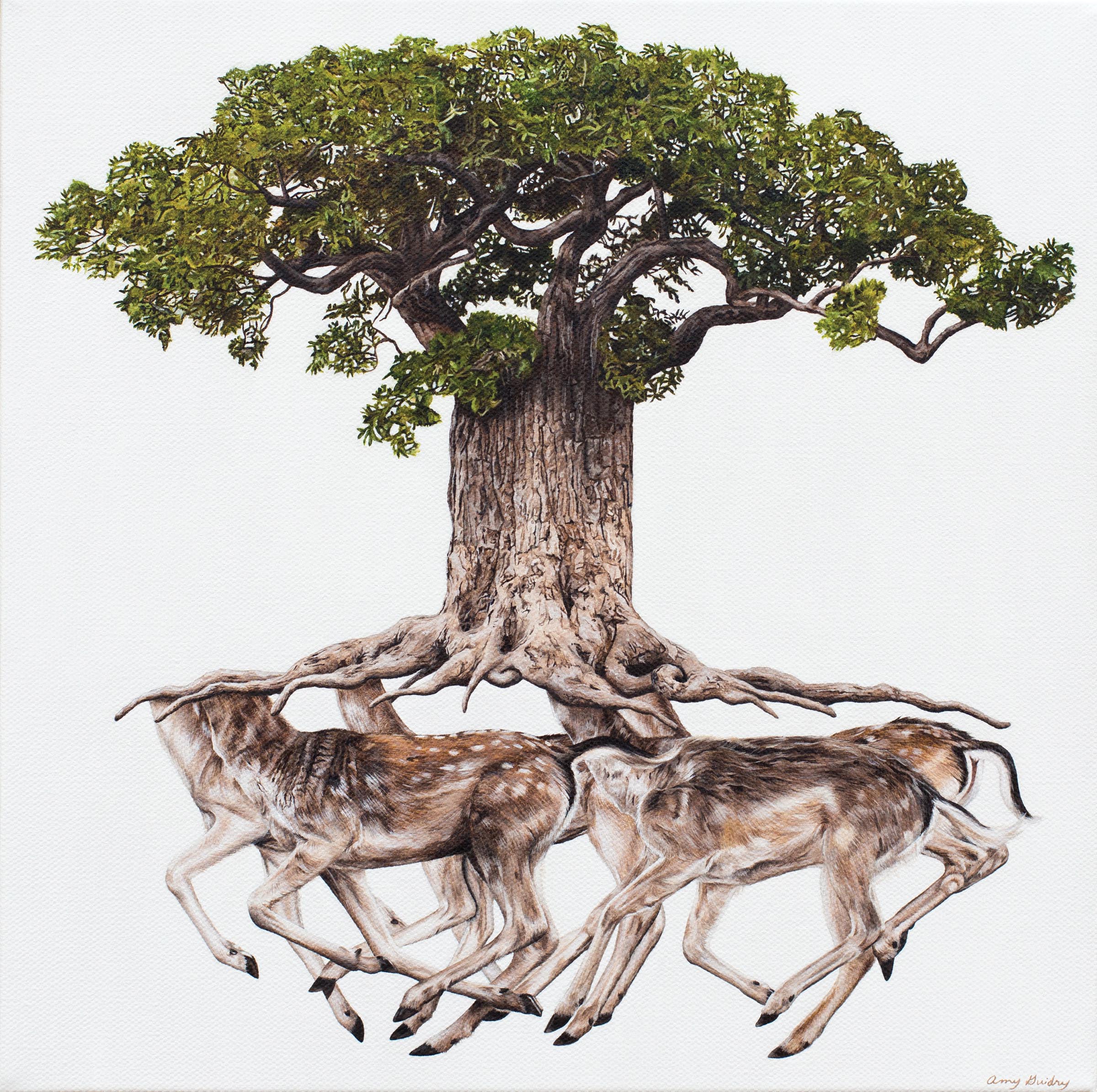 Lafayette artist Amy Michelle Guidry has much in common with the 19th-century French Impressionist painter Edgar Degas. To Degas, “Art is not what you see, but what you make others see.” Guidry paints “not just to bring attention to issues affecting the planet, but to make people look at it in a way they never did before.”

Guidry, who was born in North Carolina in the mid-1970s, grew up in Slidell and studied art and psychology at Loyola University in New Orleans, is in the perfect place to observe the lush but fragile natural landscape of South Louisiana. After completing college in 1998, she moved to Lafayette where she met her husband-to-be Zack Guidry. She quickly fell in love with the Cajun culture and the openness of its people, people who “know no strangers.”

With her lifelong love of nature and the psychological forces that drive us all, the Acadian parishes are the right place for her to paint not only the customary landscapes but also serve as an advocate for the preservation of nature. By combining her artistic talents and studies in psychology, her paintings demand viewers’ attention. It is this intellectual and artistic journey into the subconscious that has brought her awards and growing recognition with shows in galleries and museums across the nation.

To create these dramatic images, Guidry turned to an early 20th-century form of painting called Surrealism, which the Tate museum in London describes as an “artistic movement that explored the workings of the mind, championing the irrational, the poetic and the revolutionary.” Some of the more famous Surrealist painters were Salvador Dali, Frida Kahlo and René Magritte. It is an excellent vehicle for an artist such as Guidry to reach beyond the obvious.

“Surrealism,” Guidry says, “allows me to delve into layers of meaning behind my work, creating a narrative that can fit into one painting, even if it isn’t completely apparent from the onset. Surrealism also allows me to create mirror images of problems facing our world today.”

Guidry’s paintings are not revolutionary or irrational, but they do force viewers to examine, react, think and explore their own psyches to understand her message. In her current series “In Our Veins,” she conjures viscerally disturbing and often macabre imagery to create a “psychologically-charged narrative” that gives human qualities to animals to show they are no less important than people and that all life is interdependent and interconnected.

Guidry, now a vegetarian, believes juxtaposing seemingly unrelated visual images forces viewers to have what she describes as an “inner dialogue with the work to discover more about themselves” and their place in the world.

“If viewers can see themselves in the work,” she says, “and see how their impact on the world translates into this work, maybe they will be more conscientious of their actions and take steps toward positive change. Each painting is an opportunity to tap into the viewer’s visual perception, emotions, memories, fears and passions.”

In addition to evoking emotions, Guidry wants her paintings to “inspire, enlighten, amuse, brighten and bring forth positive change.”

But most importantly, they challenge the imagination — and conscience. 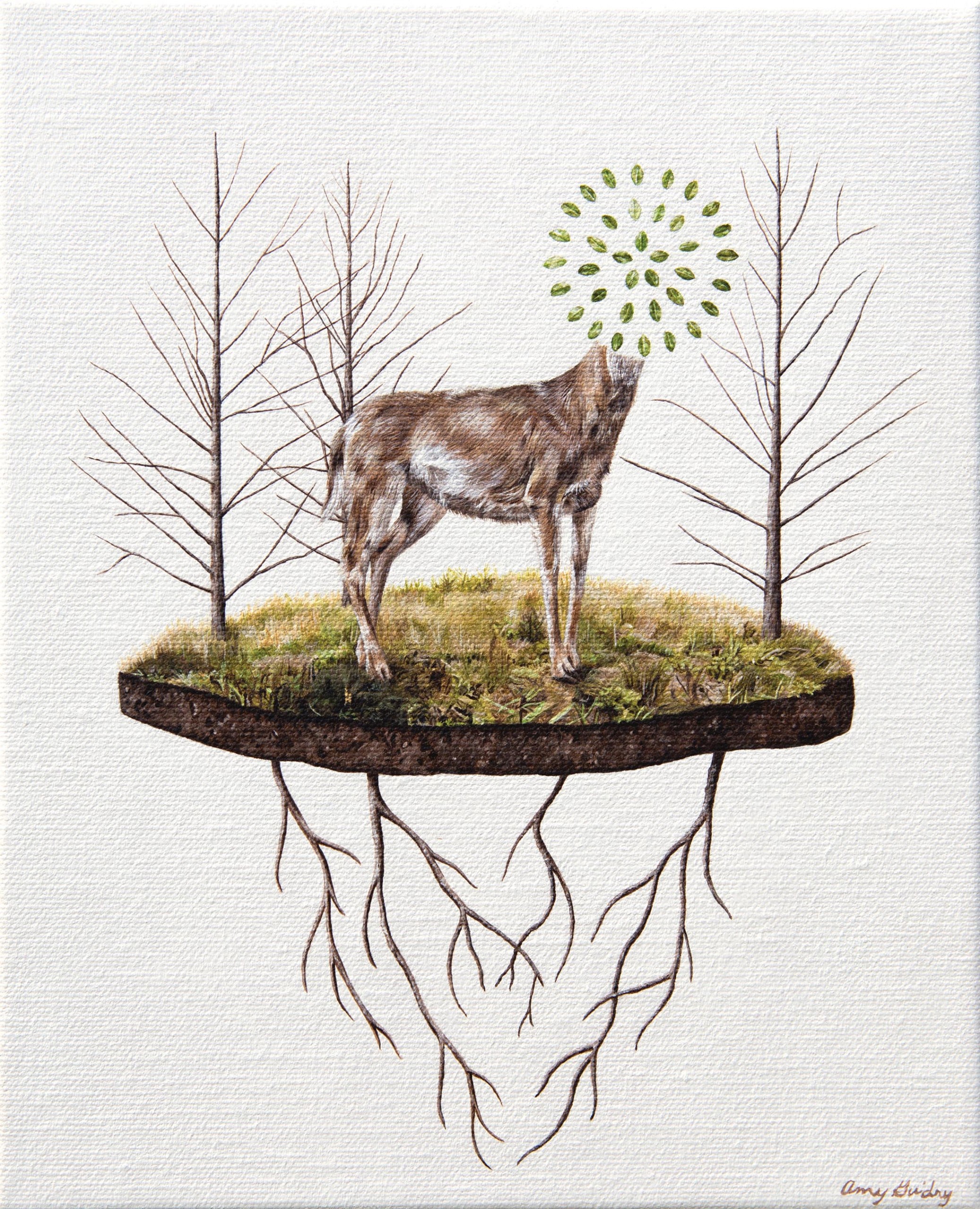 View more paintings by Amy Guidry at amyguidry.com or AcadianaProfile.com