“This case was actually my grandfather’s case,” Williams, 24, says as she motions toward the fiddle case that her grandmother, Mary Castille, 76, periodically handpainted for her now-deceased husband at the turn of each season. The artwork is a delicate rendering of a swamp at sunset, complete with a white pelican.
It holds two Barcus Berry fiddles: Williams’ nearly mint garnet-and-onyx 5-year-old; and Castille’s ancient turquoise model, still vibrantly painted save for the section worn bare by his legendary hands from their repetitious, back-and-forth contact. A crawfish and an Acadian flag embellish the instrument like a coat of arms.

“My grandma did the crawfish, and we put the Acadian flag,” the scion states. “When we would travel, we would tell stories about Cajun music and the culture and sometimes people would ask, ‘What’s a crawfish?’ Pawpaw would turn the fiddle around and say, ‘It’s one of these things.’”

Williams, a psychology major who just completed her junior year at the University of Louisiana at Lafayette, is bespectacled and curvaceous with deep mahogany locks that tumble down in waves past her multiple ear piercings and over her back and shoulders. She cradles the fiddles lovingly, like a mother would her children.
“These are the two I mainly use on stage,” she explains.

For Williams, a native of Opelousas and current Lafayette denizen, the stage could mean anything from Acadiana favorites like Festivals Acadiens et Créoles and Festival International de Louisiane, to the wintertime Festival du Voyageur in St. Boniface, the French Quarter of Winnipeg, Manitoba, and the New Orleans Jazz & Heritage Festival, in which she played for the first time under the new Sharecroppers monicker this year.

In her extensive travels across Acadian French-speaking lands, Williams has met scores of musicians, like Hank Williams Jr. and Willie Nelson, and calls local legends Cedric Watson, the members of Feufollet and the Savoy family her friends. Williams is one sprout of a fresh crop of Cajun musicians that is  redefining the genre. 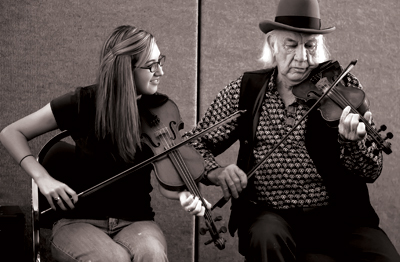 “The songs that I’m playing now are the same songs that my grandfather learned when he was growing up,” she muses. She speaks with her hands as much as her mouth, and her fingers complement the syllables her slightly accented voice emphasizes with infinitesimal strokes in the air. “Some songs change a bit, but, in essence, it’s the same stories. There are a lot of groups now, especially a bunch of friends of mine, that are taking the Cajun language and using that to change the music a little bit, too,” says Williams. “They’re preserving the language, but not necessarily the style of music, and there are some that will do the opposite: They’ll be more into the style and will change the words. I’ll do that.”

For Williams, the passing of the most influential person in her life was a time of grieving and self-discovery. She could not touch a fiddle for six months after Castille’s death, but it eventually proved the catalyst to her playing again.

“When he passed, people started asking us to play tributes to him,” Williams recalls.  “We didn’t really expect to keep the band together. We played tributes and the people asked me to play, and it was like, ‘Well, might as well keep the guys that know how to play the music and know me well.’ Until I figure out what I wanna do with my music, those are the guys I’m gonna keep.”

Castille’s band became Williams’ band. The Sharecroppers are composed of her uncle, Blake Castille, guitar; Phil Caelin, bass; Lee Tedrow, steel guitar; and Danny Kimbal on drums. Seventeen-time Grammy-nominated and four-time Grammy-winning Dockside Studios engineer Tony Daigle will sometimes join in on rhythm guitar. Although seemingly a heresy to some, this Cajun band lacks an accordionist. The band was accustomed to Castille’s playing, which differed from his granddaughter’s style.

“We played traditional music, but Pawpaw’s music was influenced by the swing style,” says Williams. “The way I play is a little different from the traditional style, with the bowing techniques.”

“What gives a song flavor, to me, is bowing technique,” Williams says. “What I’m trying to do is use my grandfather’s style that he taught me, then listen to all of the music that makes me want to dance and feel it. Then go from there. I just started writing my own stuff.”

Williams, who is fluent in Cajun French, has been training since age 3; she began with classical piano. She started playing the fiddle at 10 and is currently learning guitar and bass from her father, Ricky Williams.

Her father plays bass in The Freetown Hounds and The Elvis Depresslies and was the founding member of the eminent psychedelia/hard-rock band Santeria.
“It’s kinda surreal,” he says of his daughter. “I’m trying to show her some of the things that I’ve done and try to teach her a different avenue of type of music, also.”
“Now that [Hadley Castille] passed, I want to really get into the music and decide where I want to take it,” says Sarah Jayde Williams, who wants to incorporate personal anecdotes from Castille’s life, like rationing sugar during World War II, into her music.

“That way, I will be preserving the history of the culture, but modernizing it just a bit,” she emphasizes, squinting her eyes and pinching her index finger and thumb. “I figure if I do that, it’ll get younger generations more interested in the music. If it’s something more relatable, it’s easier to preserve.”

The fiddle case that contains her past, present and future sat open, revealing her fiddle lying next to her grandfather’s. The same instrument she could not touch after his death has become a comforting presence.

“People will see it and say, ‘It’s good to see that fiddle again,’” she said, caressing the worn parts of the iconic instrument. She smiles slightly, then it grows, her full cheeks lifting her cat-eye glasses. “All things shift and change.”