A Man and His Zoo

Honey, I bought a zoo today!

Not exactly what the average wife expects to hear from her husband as an opener for a casual dinner conversation.

But since that night in the George Oldenburg household in Lafayette 12 years ago, the family has grown from George and his wife, Marleen, and their three sons: Matthew, Michael and Mitchell, to include tigers, lions, giraffes, bears, wolves, peacocks, rare birds and butterflies … thousands and thousands of butterflies in a static rainbow exhibit.

“It’s a new experience every day,” says George Oldenburg, the owner and director of Zoosiana (formerly called The Zoo of Acadiana) in Broussard. “We have 750 animals from 130 different species from all over the world here at Zoosiana. They live and play over 45 acres. It presents quite a challenge … but it’s a challenge I look forward to every day.”

To be sure, just about every non-human family moment of the 57-year-old Oldenburg’s life is filled with his animals: from the minutiae of diet and health to the long-range planning to make their Zoosiana as close a home to their natural habitat as possible.

So how does a kid from New Orleans who sated his love for animals with a pet dog wind up transforming a one-time run down collection of cages into a world class zoo with representation in the Zoological Association of America (ZAA)?

“I was vice president of a bank in Lafayette,” he says. “I had been there 21 years, and the more I looked at where I came from to where I was and to where I wanted to be…it just didn’t satisfy me any longer. The more I thought about it the more I came back to the same conclusion and that was ‘I don’t want to be doing this for the rest of my life.’”
Oldenburg recalled a long-time customer of the bank who owned a zoo in Broussard a few miles south of Lafayette.

“This man I had known from my banking years, who owned the zoo was getting up in age and he had lost interest in the operation. And it was getting kind of run-down. I knew about the zoo and I just knew that was for me. I went into my office one day and turned in my resignation. I went to a different bank than the one I had worked for and applied for a loan. Until everything was finalized I was actually unemployed. “
But not for long.

The loan for $1.2 million came through. Oldenburg bought his zoo and it’s been running and building and polishing and transforming the long ago sad little collection of animals into a zoological garden that “is world class for its size and makes Acadiana mighty proud,” as one frequent visitor describes it. “What is used to be is only a memory.”

“He (George) puts his heart and soul into these 45 acres,” says son Matthew, 26, who runs Zoosiana’s day-to-day operations and serves on the board of directors of the ZAA as secretary. “He’s here from before dawn to after dark sets in. He figures there’s always something else to be done.”

To be close to the action, George Oldenburg spends many nights in the house that sits in the middle of the zoo and is furnished in “animal motif” such as zebra striped towels, and wall covering framed photos of lions and wreaths of peacock feathers festooning the walls. Nothing is left to chance and if it’s on the floor or on the walls or overhead, you can bet George Oldenburg built it himself or scavenged it from a garage sale, a flea market or even from of pile of something thrown out by somebody.

“A lot of times, I have to get up every two hours to bottle feed a baby animal or make sure they’re all warm enough during a cold snap,” George Oldenburg says. “It makes sense to have this house here. I couldn’t do it any other way. As far as doing it myself, I’m just thankful that I have the talents and ‘time’ to do that.”
The animals are also the benefactors of Oldenburg’s creative abilities.

See those habitats with pools and running water for the white nutria and the otters?

Oldenburg scoffed up several discarded satellite dishes, used them as roofs and filled in the rest. The nutria and otters couldn’t be happier.
That Cajun cabin sitting out in the bayou exhibit?

“Somebody tore down a fence and I picked up the boards and built the cabin from them.”

“I did the decorations free hand with sheetrock mud and a cake decorating kit and wood I had bought from Home Depot,” George Oldenburg says rather nonchalantly. “In fact, all of the decorations are from garage sales or things picked out of junk piles and recycled. All the tin you see behind the shields? That comes from an old barn. It was all rusted out and they were going to throw it all away. That old plane hanging from the ceiling and flying over the savanna?  That’s made out of old pieces of canvas that somebody used to paint with.”

Right down to the one-time storage shed that Oldenburg found when he first bought the zoo. He has transformed that into a luxurious ‘events palace’ that is in demand for everything from wedding receptions to upscale birthday and anniversary parties to corporate meetings.

One would be remiss to not call this entire ongoing project a real ‘green’ operation;’
And it all has its epiphany moments, the kind you don’t find sitting at a desk in a bank.  Like every morning just as the sun is peeking over the horizon and beams of light race through the oaks.

There are roars and squawking and squealing as the cacophonous wildlife responds to the new days.

It is these awakening moments that George Oldenburg loves the most. He tools along in his nearly silent golf cart, down and around the asphalt walkways connecting exhibits and animals. He knows each animal by name and he calls out to them and wishes them a good day and has an offering to each monkey and foxes’ liking: “This guy (a spider monkey) won’t eat breakfast unless I give him a cookie first,” Oldenburg says. “This one will have a bad day unless I rub his neck first. This tiger…”
And so the morning and the day and the evening go for the former banker turned zookeeper.

When all is done and he finally gets home and his wife, Marleen asks, “How was your day?” George Oldenburg will give new meaning to the phrase, “It’s a zoo out there!” 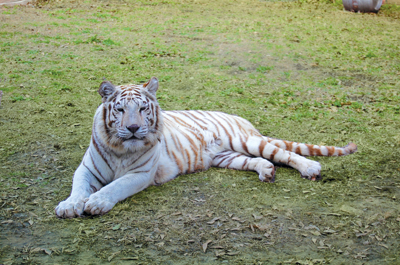 So what kind of nuts and bolts tightening does it take to keep more than 150,000 visitors coming to (and coming back) to Zoosiana each year? “We have 25 employees here at the zoo and every one of them is dedicated to our mission and to the animals,” says George Oldenburg. “I certainly couldn’t do it without them or with any less a commitment from any of them. It’s very important that we maintain high standards for Zoosiana; standards that are acceptable to school boards to where a trip to the zoo is considered an educational benefit. That’s why I bought the zoo to begin with 12 years ago. I love this community and I could not see it without a zoo.”

And hardly a week goes by without a “special event” from the annual “Zoolebrate Gala”, “Eggstravaganza” and “Safari of Lights” to “Boo at the Zoo” and camp outs complete with animal shows for the kids.

“Funding comes from a variety of sources,” Oldenburg says. “Admissions, concessions, train rides, rentals of buildings for corporate events, special events such as “Boo at the Zoo,” family memberships. All of that makes the zoo profitable; however, I put all the money back into the zoo. I’d rather put in some nice walkways in the zoo or buy a giraffe. Something that will benefit the animals and  the visitors to the zoo. There’s nothing I need or want personally that’s more important than that.”

Like the array of “stars” that perform at the “Zootorium” for five shows each day: “Hoover” the ant eater, “Vincent van Go”, the boa constrictor, “Douglas”, the big-eyed owl who makes several fly overs during each show, and “Persia” the serval cat, and second fastest animal in the world…That title is still held by the lightning fast cheetah.

Then there is the newly opened butterfly and moth static exhibit, a gift to the zoo from an elderly man in New York who wanted a permanent home for his beloved collection following his death.

“We always have to start with and come back to the animals themselves,” says Matt Oldenburg. “They’re what it’s all about. And we make our selections very carefully and all with a purpose.. For example, we had ‘Gabriel’ the giraffe and a little over a year ago, we purchased “Evangeline” as a mate for him. We held a wedding ceremony for them and it was a big, big event. We’re hoping there’s a little giraffe in the future.”

“We also have two Bengal tigers,” says George Oldenburg. “But instead of the black stripes, our tigers have honey golden stripes. There are only 90 such tigers in the world and we are so very fortunate to have two of them. We’ve named them ‘Gumbo’ and ‘Filé.’”

Donna Schneider of Lafayette is walking hand-in-hand with her young granddaughter, Lily who is visiting from Houston. Lily walks over to the exhibit and stares at the pair of tigers. George Oldenburg is quick to call for a bottle of milk. “Would you like to feed them, honey?” Within seconds, the child is feeding the young tiger, milk is flying all over and there are squeals and smiles all around.

“See what I mean,” George Oldenburg says. “That’s what it’s all about. That’s why I love doing this every day. It’s why I love coming to work.”